But a particular visitor we spotted March 15 on a poppy outside the UC Davis Arboretum Teaching Nursery on Garrod Drive, Davis, looked puzzling.

A beetle. But what kind of beetle?

"This is a ladybug—Paranaemia vittigera," said senior museum scientist Steve Heydon of the Bohart Museum of Entomology, UC Davis campus.  "It's a native of the western United States."

"Family Coccinellidae," said Lynn Kimsey, director of the Bohart and professor of entomology at UC Davis.

Ah, yes, our little lady beetle, aka ladybug, ladybird beetle. But this one was striped, not spotted. Fact is, ladybugs are not always red with black dots. They come in coats of many colors: yellow, orange, brown and the like--some with dots, no dots, stripes, no stripes, and blotches or no blotches.

"Although rather consistent in body form and habits, there are a great many species, with more than 125 known in California," writes retired UC Berkeley entomology professor Jerry Powell in his book, "California Insects," co-authored by  Charles Hogue (now deceased), former senior curator of entomology at the Los Angeles Natural History Museum.

Said Kimsey: "We have pretty old specimens from all over northern California including the Central Valley. They are native here. It's interesting, though, how little biological information I could find about them."

Discover Life has a good website on ladybug identification. You can also see them on BugGuide.net.

The Lost Ladybug Project, which encourages you to monitor ladybugs and upload photos of them, also has good identification tools and photos of the bugs, many taken in Petaluma.

One thing's for sure: we're accustomed to seeing spots on our ladybugs, not stripes. 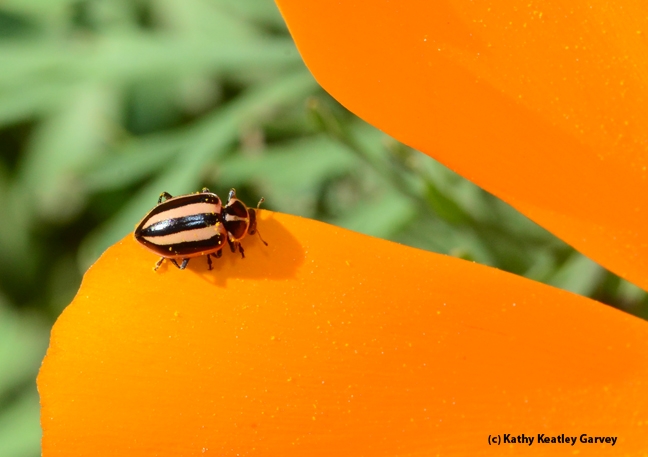