Doctoral candidate Rebecca Godwin of the Jason Bond lab speaks not only English, but Spanish and Swahili. (Photo by Kathy Keatley Garvey)
They came, they saw, they learned.

Such was the case at the Bohart Museum of Entomology during the ninth annual UC Davis Biodiversity Museum Day, an annual science-based event showcasing 13 museums or collections across campus.

At the Bohart Museum, visitors held Madagascar hissing cockroaches, stick insects and praying mantids. They viewed hundreds of butterfly specimens. They marveled at rhinoceros beetles and bark beetles. They examined specimens under a microscope. They learned about the many species of bees.

It was a good day to learn about science.

The Bohart Museum, directed by Lynn Kimsey, professor of entomology at UC Davis, houses nearly 8 million insect specimens, as well as a live "petting zoo" and a gift shop. Open to the public Monday through Thursday, it is located in Room 1124 of the Academic Surge Building on Crocker Lane.

The Bohart Museum periodically hosts open houses (free and family friendly) throughout the academic year. The next open house, themed "Busy Bees and their Microbial Friends," is set from 1 to 4 p.m., Saturday, March 21.

Also coming up is the 106th annual UC Davis Picnic Day on April 18 heralding "Envisioning Tomorrow."  Like Biodiversity Museum Day, it's free and family friendly but not all the museums or collections. 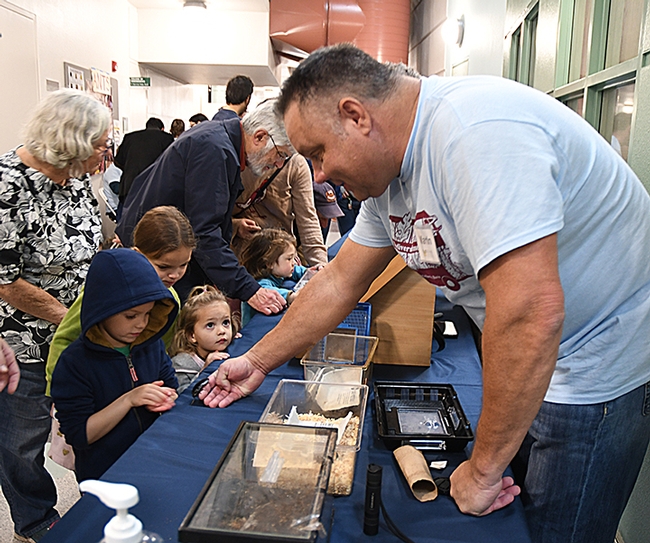 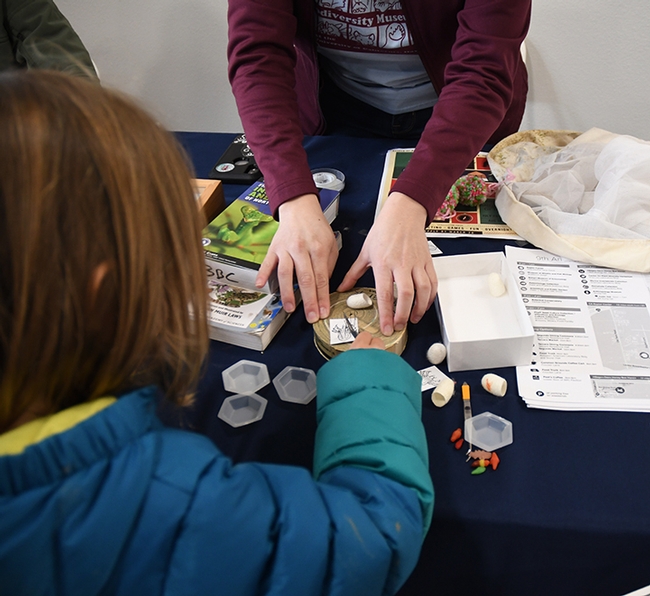 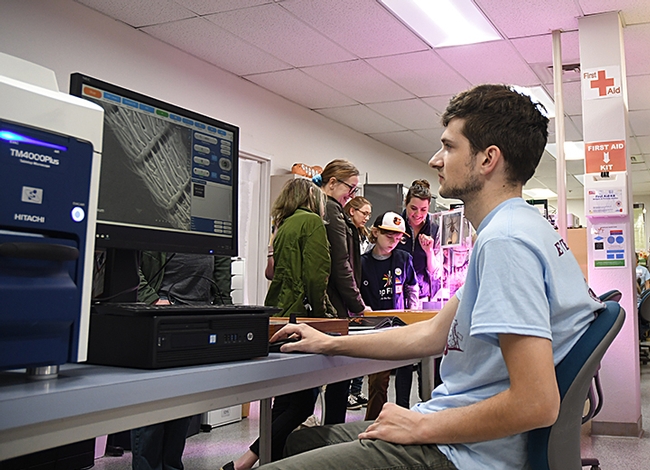 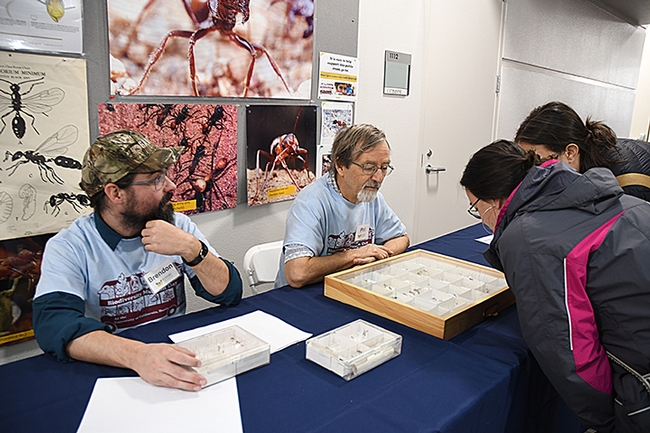 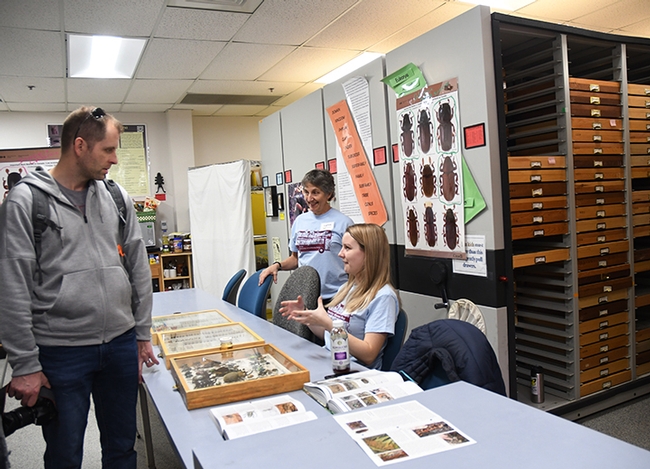 Lynn Kimsey, (standing), director of the Bohart Museum of Entomology, and Crystal Homicz, a doctoral student in forest entomology, show beetles to a visitor. (Photo by Kathy Keatley Garvey) 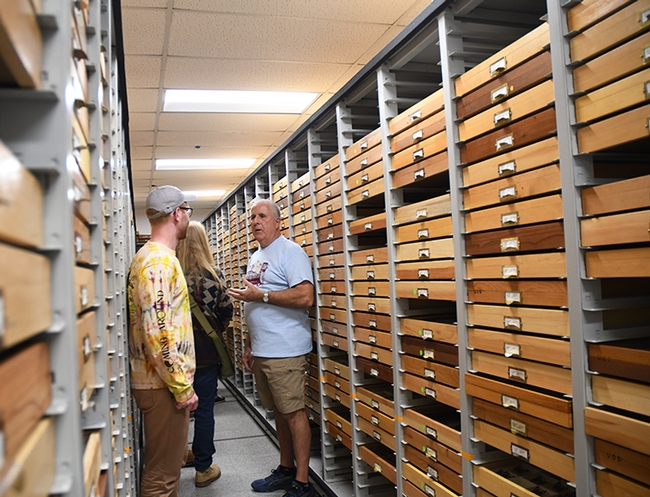 Entomologist Jeff Smith, curator of the Lepidoptera section of the Bohart Museum, talks about the thousands of butterfly and moth specimens. (Photo by Kathy Keatley Garvey) 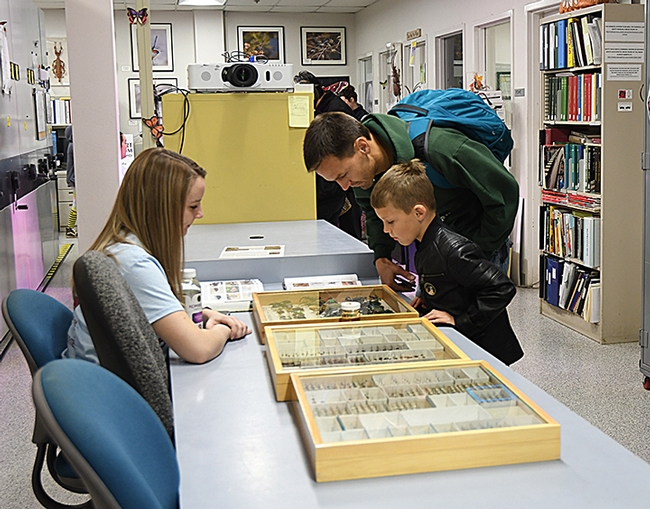 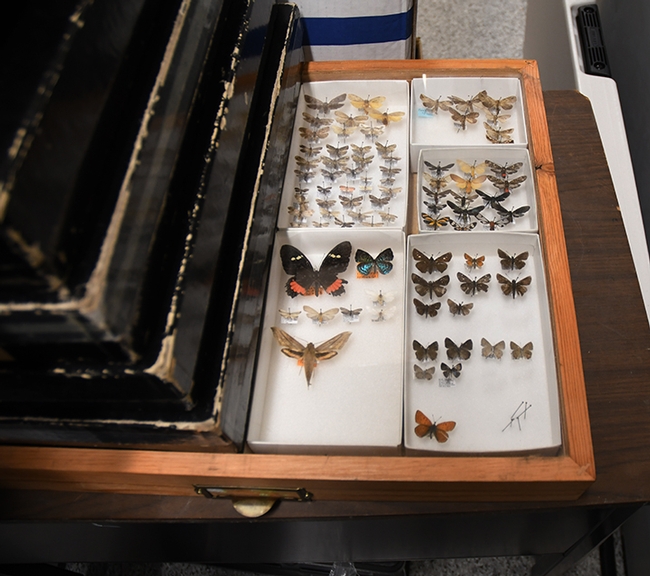 Butterflies at the Bohart. (Photo by Kathy Keatley Garvey) 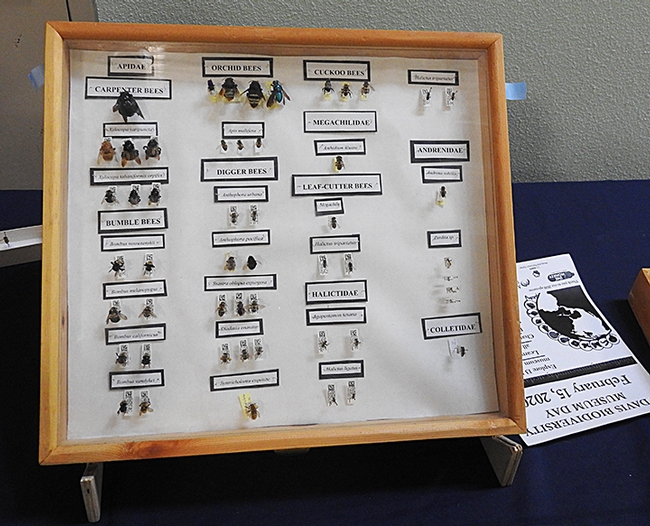 The diversity of bees. (Photo by Kathy Keatley Garvey) 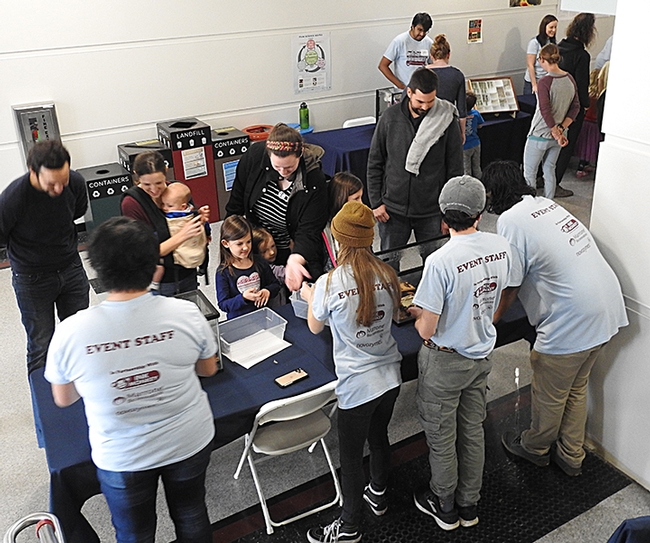 A trapdoor spider, Ummidia sp. (Courtesy of Wikipedia)
Chances are you're not thinking about spiders right now, but arachnid experts at the University of California, Davis, are.

Two doctoral students from the Jason Bond laboratory, UC Davis Department of Entomology and Nematology, won first- and second-place awards in the student research competitions at the recent meeting of the American Arachnological Society, held at Washington and Lee University, Lexington, Va.

Rebecca Godwin won first in the poster competition for her research on trapdoor spiders and Lacie Newton won second for her oral presentation on species delimitation.

Congratulations to these dedicated doctoral students!

What's a logo without spiders? This was the logo of the American Arachnological Society meeting.
"I am revising the genus Ummidia in the Nearctic region. I have approached this taxonomic problem by examining approximately 700 specimens of Ummidia from various collections (American Museum of Natural History, Museum of Comparative Zoology, Florida State Collection of Arthropods, California Academy of Sciences, and Auburn University Museum of Natural History). Examination of museum material has seemingly confirmed the undescribed diversity of Ummidia; preliminary estimates of New World species ranging between 50 and 60, with particularly high amounts of diversity in the Florida and Virginia. This study, along with many others conducted utilizing museum collections, is indicative of the importance of natural history collections and their usefulness in discovering unknown biodiversity.”

Lacie titled her work, “Species Delimitation of the Antrodiaetus Unicolor Species Complex Using a 3RAD Approach.” Her abstract: “Although species delimitation can be highly contentious, the development of reliable methods to accurately ascertain species boundaries is a fundamental and necessary step in cataloguing and describing Earth's quickly disappearing biodiversity. Species delimitation in spider taxa has historically been based on morphological characters; however, certain mygalomorphs are morphologically indistinguishable from each other yet have considerable molecular divergence." Rebecca Godwin with a statue of Theodore Roosevelt at the American Museum of Natural History, where she did some of her research. She won first place in the student poster research competiion at the recent meeting of the American Arachnological Society.
Rebecca Godwin
Godwin holds two degrees from Auburn University: her bachelor's degree in zoology in 2004, and her master's degree in wetland biology in 2011. She began her doctoral studies at Auburn University in 2014, and transferred to UC Davis when Bond accepted the UC Davis position in 2018.

Godwin won the Auburn University's Department of Biological Science's Outstanding Service Award in 2016. She is the lead author of research published in 2018 in the journal Molecular Phylogenetics and Evolution on “Phylogeny of a Cosmopolitan Family of Morphologically Conserved Trapdoor spiders (Mygalomorphae, Ctenizidae) Using Anchored Hybrid Enrichment, with a Description of the Family, Halonoproctidae Pocock 1901.” She currently serves as a graduate teaching assistant in the course, "Biology 2C," at UC Davis. Lacie Newton working in the field. She won second-place in the oral competition at the recent meeting of the American Arachnological Society.
Lacie Newton
Newton received her bachelor of science degree from Millsaps College, Jackson, Miss., in 2016, and then joined the Auburn University doctoral program. Like Godwin, she transferred to UC Davis with her major professor in 2018. Newton served as an undergraduate teaching assistant at Millsaps College for “Introduction to Cell Biology” and “General Zoology,” and as a graduate teaching assistant in “Introduction to Biology” at Auburn University.