Robert E. Page Jr.
It was great to see Robert E. Page Jr., emeritus professor and former chair of the UC Davis Department of Entomology, be selected as one of the 10 fellows of the 6000-member Entomological Society of America for 2012.

The ESA Governing Board today announced the new fellows, who will be recognized Nov. 11, 2012 at the ESA’s annual meeting in Knoxville, Tenn.

Page,  the vice provost and dean of the College of Liberal Arts and Sciences, Arizona State University,  Tempe, since July 2011, is a pioneer in the field of evolutionary genetics and the social behavior of honey bees.

Page did much of his research at UC Davis. He received his doctorate in entomology at UC Davis in 1980, learning from his major professor Harry H. Laidlaw Jr. (for whom the UC Davis bee research facility is named). He then joined The Ohio State University faculty before returning to UC Davis as a faculty member in 1989.

He chaired the UC Davis Department of Entomology from 1999 to 2004.

Page, who studies the evolution of complex social behavior in honey bees, from genes to societies, left UC Davis in 2004 to be the founding director of the new School of Life Sciences. Arizona State University, where he built a Social Insect Research Group that is now recognized worldwide.

Page was trained as an entomologist, evolutionary population geneticist, classical animal breeder, and mechanistic behaviorist, according to a news release issued by the ESA. "This training has defined his research approach of looking at the genetics and evolution of complex social behavior. He has taken a vertical approach to understanding the mechanisms of honey bee social foraging and how it evolves."

His work is contained in more than 225 research articles. Page has also co-edited three books and authored or co-authored two. Page is a highly cited ISI (Institute for Scientific Information) author in plant and animal science. He is a fellow of the American Association for the Advancement of Science (AAAS) and an elected member of the American Academy of Arts and Sciences, the German National Academy of Science, and the Brazilian Academy of Science. In 1995 he was awarded the Alexander von Humboldt Research Prize by the government of Germany.

Of the 90 hives, about 70 have instrumentally inseminated queens as part of their pollen-hoarding breeding research program.

Back in 2006, Page told us: "Davis is still home to me. I raised my family there, my closest friends and colleagues are still in the entomology department there. I still feel very strong attachments.”

Former department chair Robert Washino remembers him fondly.  He recently recalled that "Rob chose to return to UC Davis in 1989 to be with his former major professor (Harry H. Laidlaw Jr.). He later cared for him and his wife, Ruth, in their declining years. We all remember Rob’s scholarly side and his humanitarian side.”

Page joins three other UC-affiliated entomologists in the ESA Fellows Class of 2012:  Joseph Morse, professor of entomology at UC Riverside; Henry H. Hagedorn, who received his doctorate in entomology from UC Davis in 1970; and R. Michael Roe, who trained at the UC Davis Department of Entomology from 1981 to 1984 as a National Institutes of Health fellow in cellular and molecular biology.

And interestingly enough, Page is following in the footsteps of Harry H. Laidlaw Jr., who himself was elected an ESA fellow in 1991. 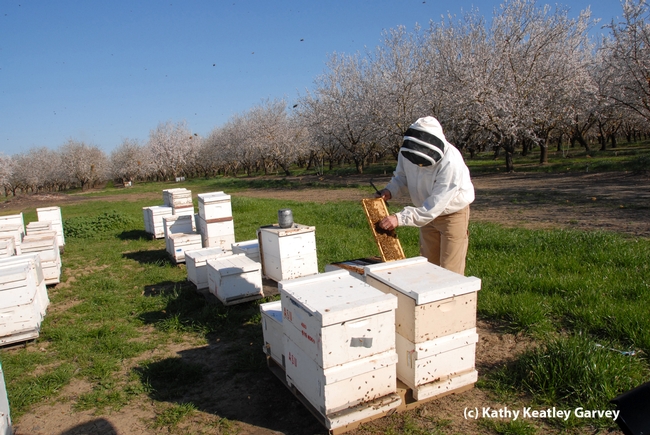