Chemical ecologists Walter Leal (left) and Yuko Ishida at a 2011 conference in China.
The work of the late chemical ecologist/UC Davis professor Sean Duffey (1943-1997) lives on.

Chemical ecologist Yuko Ishida of Toyama, Japan, a former UC Davis post-doctoral researcher who shared the same lab--and the same bench--in Briggs Hall that Duffey did, is the lead co-author of a cover story recently published in the Proceedings of the National Academy of Sciences (PNAS) about an invasive species of millipede that secrets hydrogen cyanide as a defensive mechanism. (See research paper)

Ishida and Duffey never met but they shared a love of science and chemical ecology, in addition to the same lab.

At the time of his death, Duffey was a professor and vice chair of the UC Davis Department of Entomology. When chemical ecologist/professor Walter Leal joined the UC Davis Department of Entomology faculty in 2000, he occupied the former labs of professors Duffey and Susumu Maeda (1950-1998) and memoralized their lives and work by naming his lab the “Honorary Maeda-Duffey lab.”

Ishida worked in the Honorary Maeda-Duffey lab from May 2001 to November 2007 at UC Davis. This millipede, Chamberlinius hualienensis, found in southern Japan, graced the cover of PNAS. (Photo by Yuko Ishida)
In their research, Ishida and co-lead author Mohammad Dadashipour and colleagues, Kazunori Yamamoto and Yasuhisa Asano, studied the millipede, Chamberlinius hualienensis. They  isolated a hydroxynitrile lyase (HNL) enzyme, which catalyzes the synthesis of various building blocks of fine chemicals and pharmaceuticals. Their findings suggest that “millipedes and other arthropods might be a valuable source of industrial biocatalysts.”

Ishida also photographed the millipede, found in southern Japan, for the PNAS cover.

The four scientists all work at the Biotechnology Research Center and Department of Biotechnology, Toyama Prefectural University, and are affiliated with the Asano Active Enzyme Molecule Project, Exploratory Research for Advanced Technology, Japan Science and Technology Agency, Toyama.

“To discover more efficient and stable HNLs, we focused on the invasive cyanogenic millipede as a bioresource,” the scientists wrote. “The HNL identified from the millipede showed not only the highest specific activity toward benzaldehyde among known HNLs, including the almond HNL in industrial use, along with wide temperature and pH stabilities, but also high enantioselectivity in the synthesis of various cyanohydrins. These properties make it suitable as an industrial biocatalyst. Arthropods are likely to be valuable sources of potential biocatalysts for the next generation of industrial biotechnology.” Sean Duffey (1943-1997)
Duffey, who died unexpectedly at age 54 on May 21, 1997 of an embolism precipitated by a difficult-to-diagnose lung cancer, was a well-known chemical ecologist. He researched interactions involving chemicals, plants, and insects. His first studies were of the cardiac glycosides produced by milkweeds (Asclepiadaceae) and their sequestration by the insects that fed on them. His primary efforts concentrated on the milkweed bugs, Oncopeltus fasciatus and Lygaeus kalmii, but he also worked with monarch butterflies and milkweed beetles. “Among his important discoveries was the fact that a biophysical system was operating in the sequestering of cardiac glycosides,” wrote UC Davis entomologists/professors James R. Carey, Hugh Dingle and Diane Ullman in their tribute to him. “While continuing his research on cardiac glycosides, Duffey began an analysis of the remarkable cyanogenic defensive secretions of Polydesmid millipedes.”

“There followed several papers on the biochemistry of HCN production and the production of other defensive compounds in these interesting animals,” they wrote. “After arriving at UC Davis, Sean began a long series of brilliant studies on the chemical mechanisms used by plants to fend off attack by insects and various pathogens. This work centered on resistance in tomatoes, and over the years he collaborated with numerous students and colleagues. Studies analyzed the role of numerous chemicals produced by plants including tomatine, proteinase inhibitors, and various plant oxidative enzymes. Recent studies had included analyses of induced defenses and the interactions of chemicals with the biological agents such as parasitoids and baculoviruses used in various IPM and biological control programs.”

“A constant theme and frequently emphasized message in Sean's work was the fact that chemical-biological interactions were rarely simple and straightforward,” they wrote. “He stressed that in order to understand plant-insect interactions, for example, it was necessary to understand the interactions among plant chemicals, the overall characteristics of the insect's diet, the physiological state of the insect, and the modifiable characteristics of plant and insect. Chemical and biological context and chemical mixture were seen as critical determinants of biological activity; a simple view that natural products functioned merely as "toxins" or isolated defensive factors was often misleading.”

Carey, Dingle and Ullman praised  Duffey's "truly interdisciplinary research that included several joint projects with members of the Entomology Department and also with colleagues in the departments of Nematology Ecology and Plant Pathology. We all experienced Sean insisting over and over that interactions are not simple and that one must understand the chemistry, the physiology, and the ecology to really understand interactions between plants, insects, and their pathogens. Sean's legacy is an outstanding record of how to go about studying plant-insect interactions, not just the gathering of data on interactions that occur.” 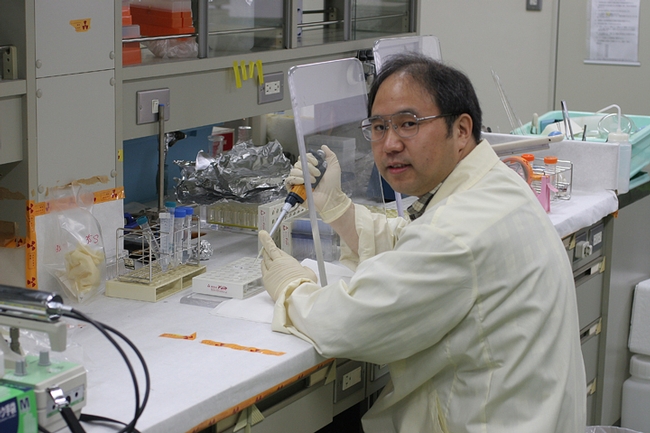 Kelli Hoover
It will be like "old home week" when professor Kelli Hoover of Pennsylvania State University presents a seminar on Tuesday, March 5 on the UC Davis campus.

Hoover, who received her doctorate in entomology from UC Davis in 1997, will discuss “Co-Evolution in a Host Baculovirus System” from noon to 1 p.m. in 366 Briggs Hall.

She will be in California in conjunction with her trip to Ventura to participate in the Gordon Research Conference,  an international forum for the presentation and discussion of frontier research in the biological, chemical, and physical sciences, and their related technologies.

“The gypsy moth has a long co-evolutionary history with its host specific baculovirus, Lymantria dispar NPV,” Hoover said. “As a result, the gypsy moth has evolved counter-defenses against the virus, while in return the virus has strategies for increasing its own fitness at the expense of the host. For example, anti-viral defenses include apoptosis of infected cells (despite viral inhibitor of apoptosis genes), while the virus manipulates host behavior to enhance transmission to new hosts, which is an example of the extended phenotype.” While a grad student at UC Davis, Hoover studied with  major professors Bruce Hammock and Sean Duffey (1943-1997). After a one-year postdoctoral position at UC Berkeley, she joined the faculty of the Penn State University Department of Entomology in 1998.

Her research program at Penn State focuses on invasive species, including development of trapping techniques for the Asian longhorned beetle; gut microbial symbionts of the Asian longhorned beetle and hemlock woolly adelgid; functions of key viral genes in transmission of the gypsy moth baculovirus and anti-viral defenses; and biological control of hemlock woolly adelgid.

Hoover is the lead author of the highly acclaimed research, “A Gene for an Extended Phenotype,” published Sept. 9, 2011 in Science. It was selected for the Faculty of 1000 (F1000), which places her work in its library of the top 2 percent of published articles in biology and medicine. 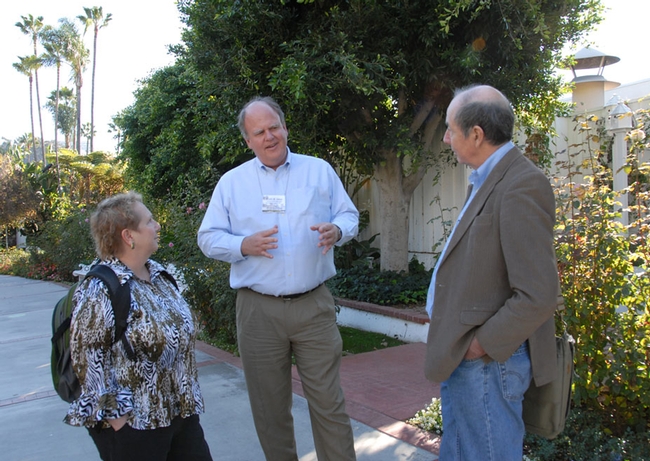 Kelli Hoover of Penn State chats with Kevin Heinz (center) of Texas A&M and Bruce Hammock of UC Davis at a meeting of the Entomological Society of America. (Photo by Kathy Keatley Garvey) 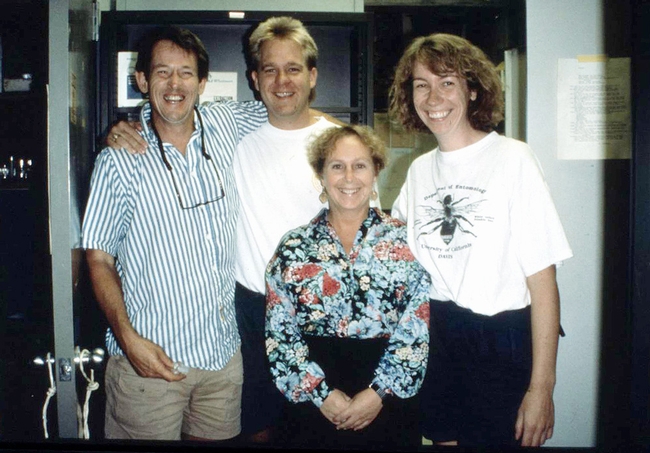 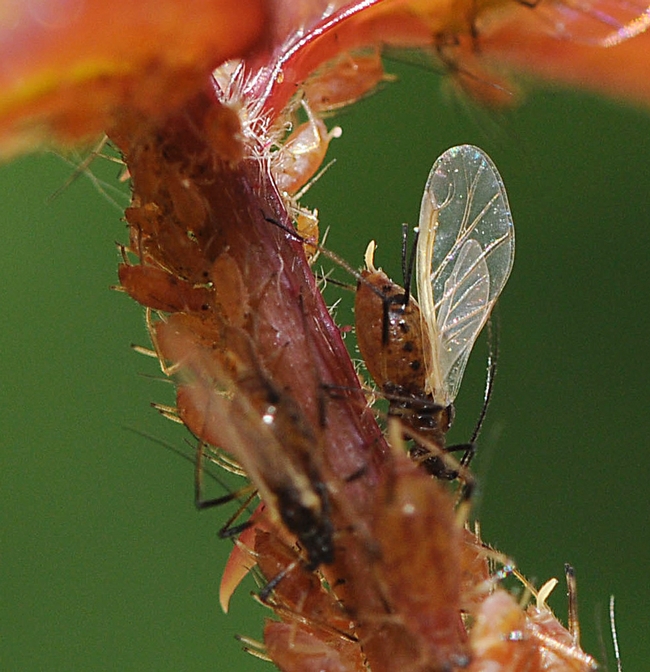