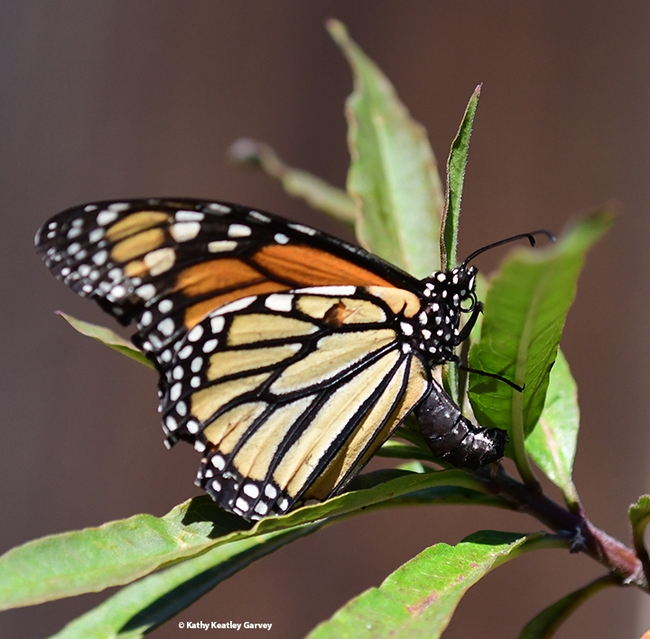 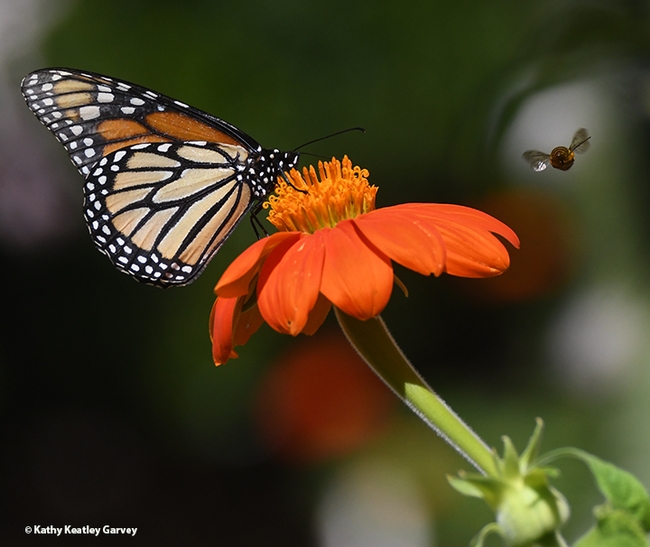 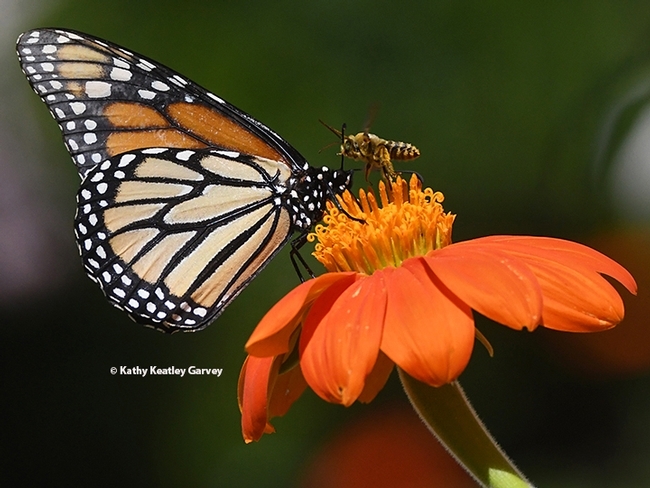 The colors are exquisite.

This is a female Agapostemon on a purple coneflower at UC Davis.  They are called "sweat bees" because they are attracted to human perspiration.

The genders are easy to distinguish. The males have a striped abdomen.

Green sweat bees are among the bees featured in the book, "California Bees and Blooms: A Guide for Gardeners and Naturalists," co-authored by the University of California team of Gordon Frankie, UC Berkeley; Robbin Thorp (1933-2019) UC Davis; and UC Berkeley affiliates Rollin Coville (photographer and entomologist) and Barbara Ertter (plant specialist). Frankie, Thorp, Coville and Ertter (and others) also published "Native Bees Are a Rich Natural Resource in Urban California Gardens" in California Agriculture.

Oh,  those bee-utiful bees. They are not only conspicuous, but charming and often camera-cooperative. 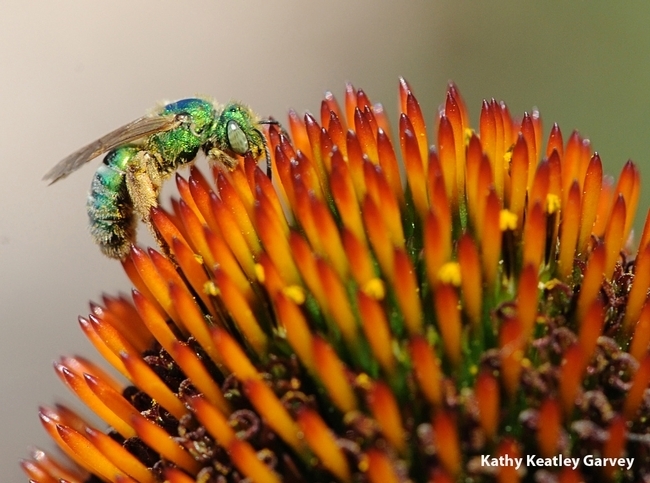 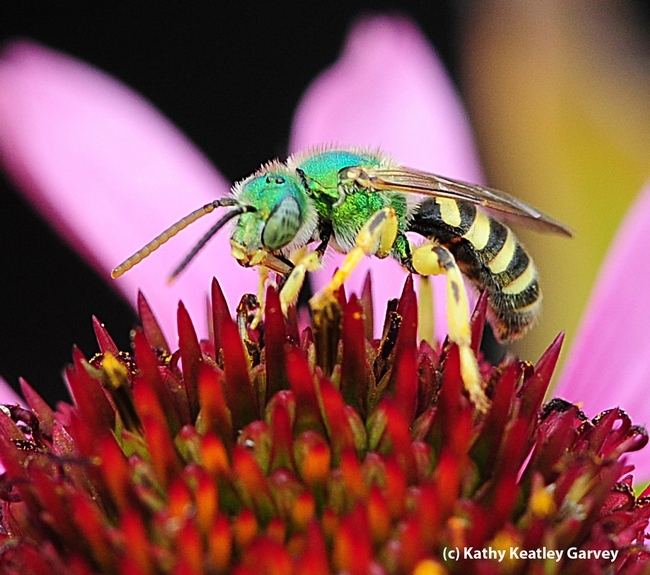 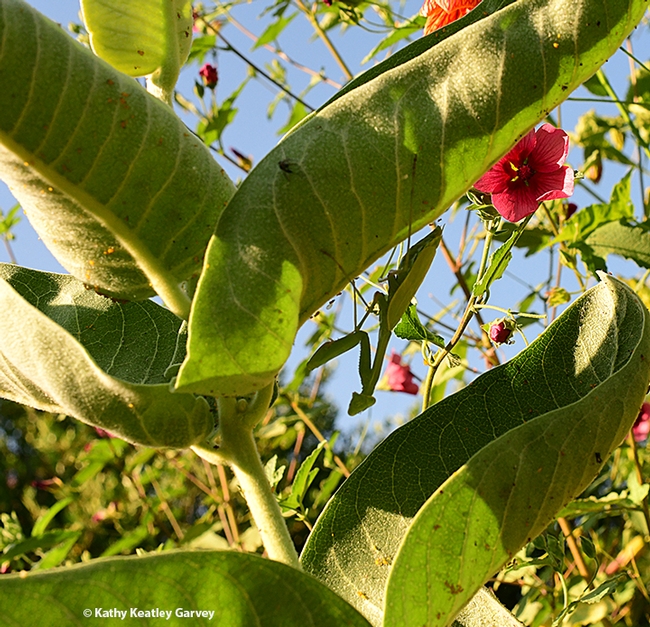 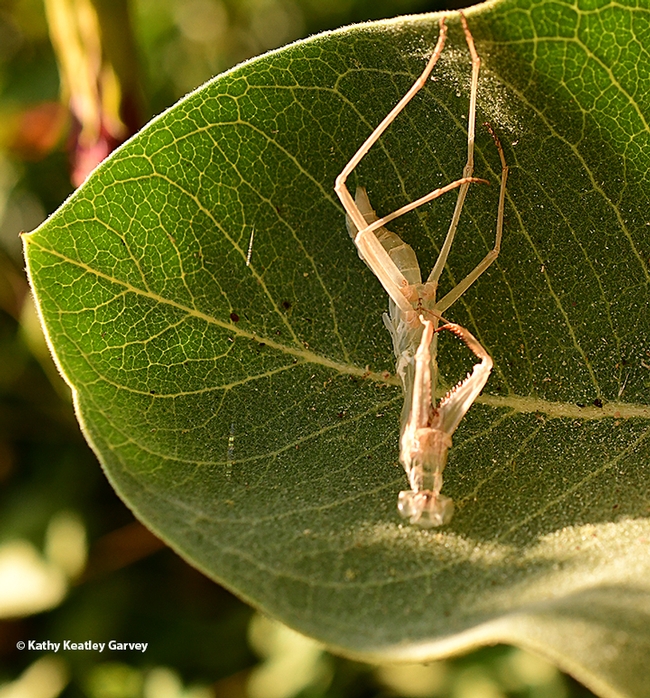 "I'm very grateful to Walter (Leal) for inviting me to light the inaugural torch for this international celebration of research on insect chemical senses with over 1400 registered participants which is absolutely unprecedented for our field. This meeting already offers evidence of the widespread and growing interest in our science. So fasten your seat belts, the presentations in this virtual meeting (showcasing) today's rising and established leaders in our field surely will report many of the latest research findings in insect chemical census and direct our attention and imagination to opportunities that lie ahead now."

So began noted neuroscientist John Hildebrand in his keynote speech heralding the opening of the first-of-its kind international olfaction/taste symposium. Hildebrand is the Honors Professor and Regents Professor at the University of Arizona and the International Secretary of the National Academy of Sciences.

The presentations, which began at 9 a.m., Pacific Daylight Time (PDT), Wednesday, Aug. 11, were uploaded to YouTube. All ten videos from the symposium are now online: John Hildebrand, neuroscientist
In his address, Hildebrand urged participants to "join me in thinking about those whose work laid the foundation for our field and those who stimulated our own personal interests and efforts. It is often said that we stand on the shoulders of those who preceded us and we who have chosen this fascinating field are no exception."

"As an undergraduate student, I started in research working on bacteria in the laboratory of the biochemist John Law," he related. "At that time he was beginning to redirect his research to problems in insect biochemistry and among other projects; he was collaborating with the biologist E. O. Wilson in studies of ant pheromones. The term pheromone had been invented only three years earlier in 1959 in Germany by Peter Carlson and Martin Luther, and in that same year another German out of Bhutan and his group had reported the first chemical identification of an insect pheromone."

That was the silk moth pheromone, Bombykol, released by the female silkworm moth (Bombyx mori) to attract mates.

The rest, they say, is history. Insect history.

"One of the highlights of the symposium was the participation of students and postdocs who showcased their work and announced at the end, that they will be looking for a position," Leal said. "Other professors, at the end of their talks, advertised vacancies in their lab. I had asked all presenters to share some new data. In fact, many presenters showed unpublished data, while others showed data that they had already submitted to BioRxiv, a non-peer reviewed pre-print server."

At the closing, Leal selected two persons to give their impressions of the symposium: UC Davis distinguished professor Walter Leal organized the symposium and served as one of the three co-hosts. (Photo by Kathy Keatley Garvey)
The survey yielded such comments as:

The detailed schedule of times and speakers was purposely not announced in advance "in order to keep attendance high when students, postdocs, and early-career scholars presented," Leal said, adding "I enjoyed listening to the student/early-career researchers talks. All of them were very interesting and well executed."