Bug Squad
sitenum=63
Happenings in the insect world
A UC Davis Exhibition: Exploring the Relationship Between People and Insects Professor emerita Ann Savageau, UC Davis Department of Design, will display her work and present a talk at the reception on Jan. 11. (Photo by Kathy Keatley Garvey)
Insects as art! The shapes, the colors...Bees, beetles, butterflies...

Capture images of the bees, create sculptures from beetle galleries, and depict insect motifs on clothing...

Beginning at noon, Monday, Jan. 8, you can view the art-and-design installation that explores the connections between people and insects. The exhibition is free and open to the public. Hours are from noon to 4 p.m. weekdays, and from 2 to 4 p.m. on Sundays through April 22.

You'll see work by UC Davis Department of Design faculty and graduate students, as well as displays from the Bohart Museum of Entomology.

The Bohart Museum will showcase insect specimens from its collection, and images from celebrated insect photographer Alex Wild, curator of entomology at the University of Texas, Austin. Wild received his doctorate in entomology in from UC Davis in 2005, studying with major professor Phil Ward. Celebrated insect photographer Alex Wild, who received his doctorate in 2005 in entomology from UC Davis, presented a seminar at his alma mater in 2008. (Photo by Kathy Keatley Garvey)
The Design Museum show explores the two sides of the relationship between people and insects, according to exhibition curator Adrienne McGraw, executive director of the Gateway Science Museum.  This includes how makers, designers, architects and artists draw upon nature's patterns to create materials and structures. The collaboration of humans and insects extends to the production of raw materials, such as silk (silkworms) and red dye (made from scale insects, cochineals).

“The inspiration we draw from the natural world is endless,” said  McGraw. “The challenge in the exhibit was focusing our story to the links between insects and textiles and forms. We selected key pieces from UC Davis' Joann C. Stabb Design Collection and works from collaborating artists, so the connection to insects could then be explored. Some of these relationships are centuries old, while other ways people are using insects and insect behavior is relatively new. What's exciting to me is to think about all the new products, designs, and technologies that are still to come as people continue to be inspired by insects. And what better place to encourage that than a university setting where so much creative work is already going on?”

For the exhibition, Savageau created a trilogy of wall pieces made from hornet nest paper, and a set of sculptures made of wood etched into striking patterns by bark beetle larvae. The Bohart Museum open house on bark beetles featured her work last August.

Savageau describes herself as an environmental artist who creates mixed-media  sculpture and installations.  Her work deals with the natural world, human culture, and their intersection.  Her current interests include  global warming and environmental destruction; consumer culture and  wasteful consumption; and artistic transformations of waste. Ann's Stanford anthropological training, her interest in the natural world,  and the many places she has lived are reflected in her art.

Ann received her bachelor's degree from Stanford University, and her master of fine arts from  Wayne State University.  She taught at the University of Michigan  Residential College from 1978-2002. She joined the faculty at UC Davis in 2003, retiring as a professor of design in 2014. She currently works as a full-time studio artist. Ann has exhibited her work in more than  80 exhibitions, both nationally and  internationally.  She has given numerous lectures and workshops and has juried many exhibitions. (See more of her work at http://annsavageau.com/)

Alex Wild describes himself as a "Texas-based biologist who started photographing insects in 2002 as an aesthetic complement to my scientific work on ant taxonomy and evolution." His photographs have appeared in numerous natural history museums, magazines, books, television programs, and other media, including the New York Times, Science, Nature, Washington Post, National Geographic and the Proceedings for the National Academy of Sciences (PNAS), among others. He and colleagues teach a BugShot Macro Photography Workshops.  Wild shared some of his photography techniques when he presented a UC Davis Department of Entomology and Nematology seminar in 2008. (See his seminar posted on UCTV and his images on his website.)

A reception heralding the opening of the Design Museum exhibition is set from 6 to 8 p.m., Thursday, Jan. 11. Savageau will give a presentation on the show at 6:30 p.m. in Room 256 of Cruess Hall. 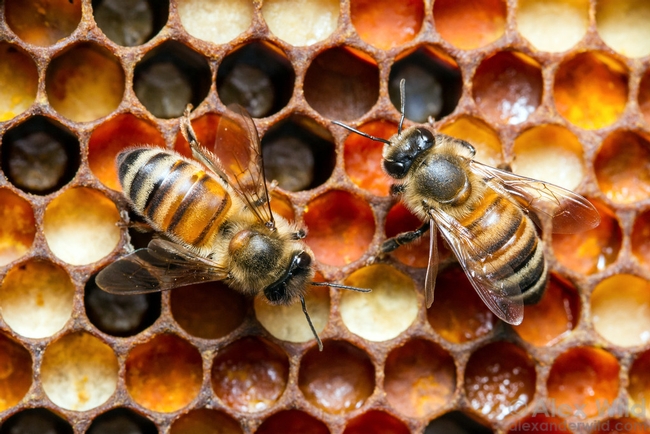 This image of honey bees by Alex Wild will be part of the Jan. 8-April 22 exhibition, "It's Bugged: Insects' Role in Design," and also will be featured at the Bohart Museum open house on Jan. 21. See alexanderwild.com for more of his photos. (Image copyrighted by Alex Wild and used with permission) 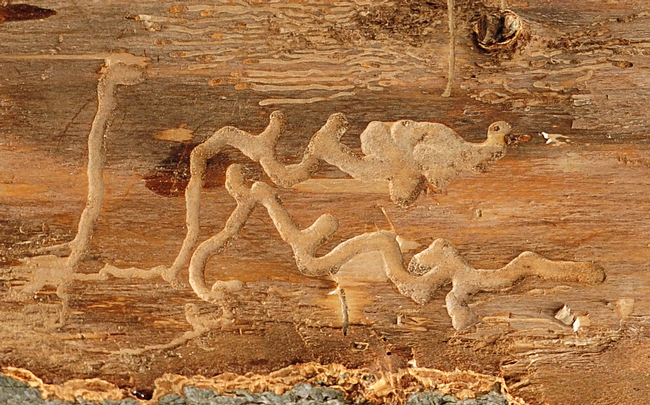