Wade Spencer with a scorpion on his shoulder and one in his hand. (Photo by Kathy Keatley Garvey)
Little Logan Loss of Rocklin is only 6 but already he knows more about scorpions than many, if not most, adults do.

Logan, a visitor at the Bohart Museum of Entomology's recent open house on spiders and other arachnids, wowed the crowd with his knowledge of scorpions.

“Logan is only in kindergarten but he was showing his mom our arachnid drawer and describing the differences between the Emperor Scorpion, Pandinus imperator, and the Dictator Scorpion, Pandinus dictator,” said Bohart associate and scorpion scientist Wade Spencer, an undergraduate student at Bohart Museum. “Thankfully, he wasn't at all shy when I asked him to repeat what he had just said to the crowd.”

“He loved sharing his knowledge with those interested,” Spencer said. “And his mom is an arachnid saint as she supports his endeavors even while she still gets the willies from just looking at them. She told me she finds it important to keep her cool so that he may never lose his enthusiasm.”

The Bohart Museum's three-hour open house included a presentation on spiders by Jason Bond, the Evert and Marion Schlinger Endowed Chair in Insect Systematics, UC Davis Department of Entomology and Nematology. Scientists in both the Bond lab and the Bohart lab led arachnid activities, including "Eat Like a Spider" and "Catch a Moth."

Spencer currently has 37 scorpions of various species. Scorpions are venomous, not poisonous, he pointed out.  As Professor Bond said in his talk: "Poisonous is what you eat it make you sick. Venomous means it takes toxin and it injects it into you."

"Fun fact about scorpions, Spencer said, "is that all of them are safe to eat as none of them are poisonous (toxins ingested or absorbed), but all of them (as far as we know) are venomous (containing poison(s) which are injected by some means)." Scorpion enthusiast Logan Loss, 6, explained to his mother the differences between the Emperor Scorpion, Pandinus imperator, and the Dictator Scorpion, Pandinus dictator. (Photo by Kathy Keatley Garvey)
Spencer says his most medically significant species in terms of how 'hot' her venom is, is his Leiurus quinquestiatus, "Death Stalker Scorpion," also called the "Palestinian Yellow Scorpion."

"I use the term 'medically significant' because it has the most potent venoms we know of, but I refrain and even discourage the use of the term 'dangerous' when describing scorpions and other venomous creatures," Spencer said. "It's often our own carelessness which makes them dangerous. If you live in in scorpion country, shake out your boots if you leave them outside and buy a $20 UV flashlight on Amazon. Those are simple ways to detect them and avoid being stung."

Spencer said he handles "my little Leiurus q. to show just how gentle and adorable she is so that people can have visual confirmation to back my claim that there is no such thing as a dangerous scorpion--though it should be clear I am not saying they're cuddly or friendly like a puppy. I advocate for them to be treated with caution and respect.

The UC Davis student attributes his interest in scorpions to his great-grandmother.

"My great-grandmother would always take me on afternoon picnics in the Big Tujunga Canyon Wash,  a mostly dry river bed in the San Gabriel mountains in my home town of Sunland.  She was a naturalist at heart and taught me about the native plants, geology, birds, mammals, reptiles, amphibians, and my favorite: the bugs. If ever we encountered a scorpion, she would stop and show me, but wouldn't kill them. Instead, starting when I was 3, she taught me that they were nothing to fear and showed me how to gently handle them. I've handled thousands ever since and not once been stung."

"I'm often asked why I'm not stung, and my response is always the same: 'It's not a cat!' By that, I mean, there's no risk of it randomly attacking me. I have scars all over my body from dogs and cats."

The scorpion display drew the interest of adults and children alike. Three Brownie Girl Scouts from Vacaville giggled and comforted one another when they experienced the "Virtual Reality Spiders" demonstration conducted by medical entomologist Geoffrey Attardo, assistant professor, UC Davis Department of Entomology and Nematology. But not so the scorpion display.

"When it came to the live stuff, the girls (Kendl Macklin, 7, Jayda Navarette, 8, and Keira Yu, 8) were more calm than nervous," said Spencer, adding "I thanked them for their bravery and showing the adults that there was nothing to fear."

The Bohart Museum, directed by Lynn Kimsey, UC Davis professor of entomology, is located in Room 1124 of the Academic Surge Building on Crocker Lane. It houses nearly 8 million insect specimens, a gift shop, and a live "petting zoo" of Madagascar hissing cockroaches, stick insects or walking sticks, and tarantulas. The insect museum is open to the public Monday through Thursday, from 9 a.m. to noon, and from 1 to 5 p.m. 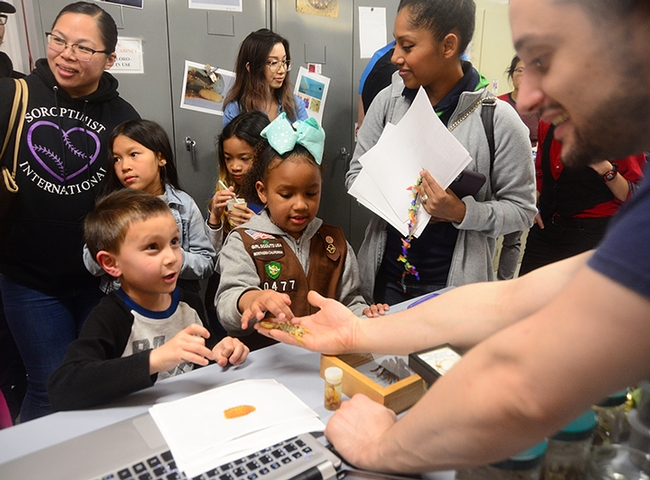 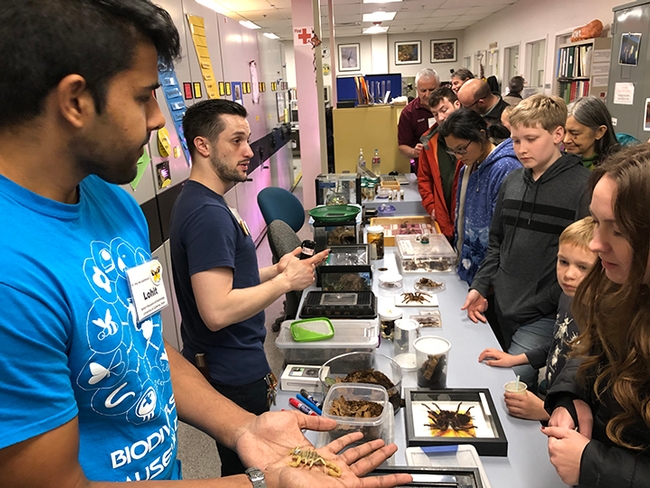 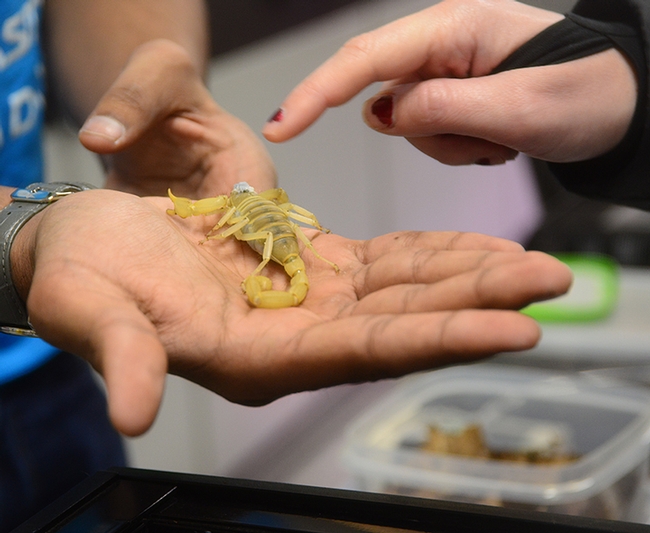 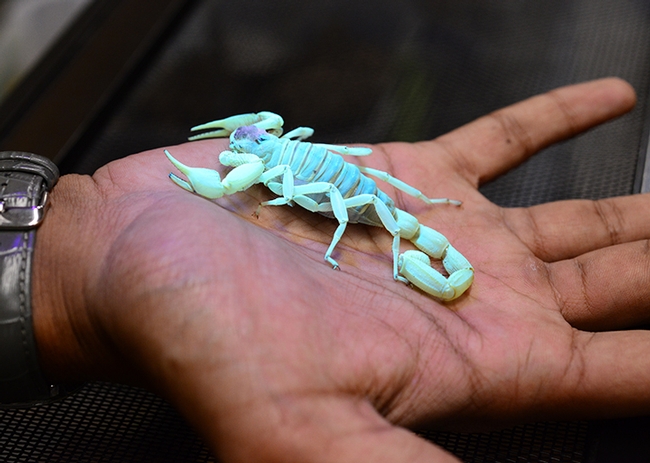 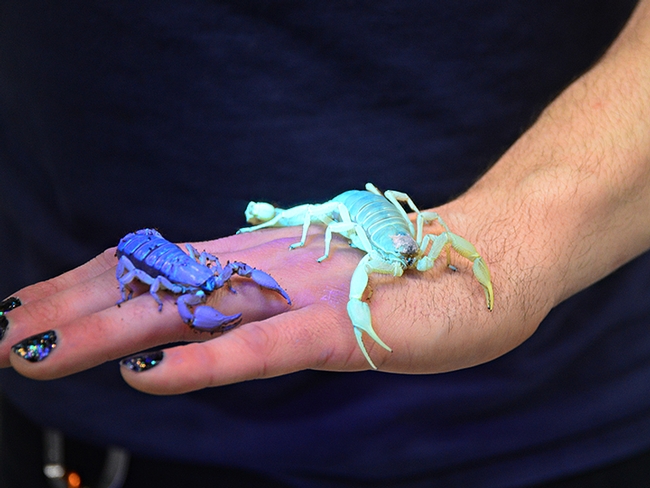 Brian Gress is the first speaker of the winter quarter.
From spotted wing drosophila to spider glue to wild bees!

Medical entomologist Geoffrey Attardo, assistant professor, UC Davis Department of Entomology and Nematology, has compiled a great line-up of speakers for the winter quarter. The Wednesday seminars, to begin Jan. 9 and continue through March 13, will take place from from 4:10 to 5 p.m. in 122 Briggs Hall. They are open to all interested person. Some seminars will be recorded for later posting.

First up on Jan. 9 is Brian Gress, a postdoctoral fellow in the lab of integrated pest management specialist Frank Zalom, distinguished professor of entomology in the UC Davis Department of Entomology and Nematology and a past president of the 7000-member Entomological Association of America. Gress will discuss the fruit fly,  Drosophila suzukii: its host selection and resistance evolution.

The spotted-wing drosophila, a major agricultural pest, damages fruit in many California counties, according to the UC Statewide Integrated Pest Program (UC IPM).  First discovered here in 2008, "it infests ripening cherries throughout the state and ripening raspberry, blackberry, blueberry, and strawberry crops, especially in coastal areas. It also has been observed occasionally attacking other soft-flesh fruit such as plums, plumcots, nectarines, and figs when conditions are right."

The adults are about 1/16 to 1/8 inch long with red eyes and a pale brown thorax and abdomen with black stripes on the abdomen, UC IPM says on its website. The males have a black spot toward the top of each wing. The females have not spots. They have "a very prominent, sawlike ovipositor for laying eggs in fruit."

For further information on the seminars, contact Geoffrey Attardo at gmattardo@ucdavis.edu. 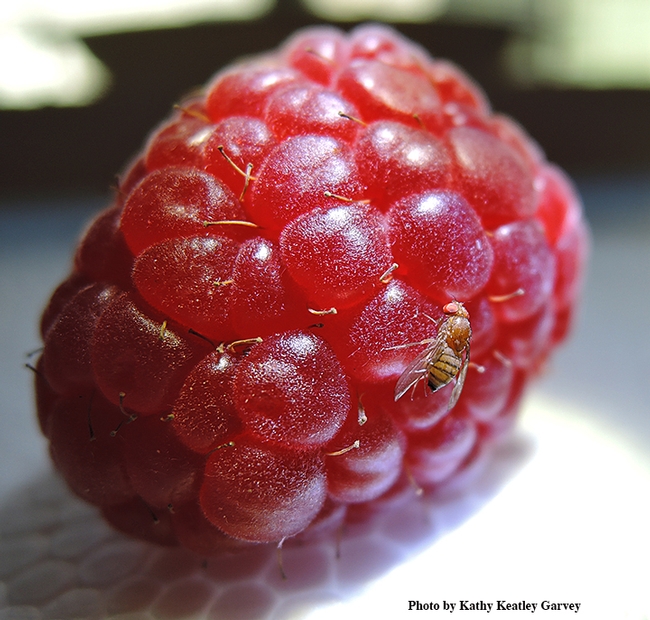