"The Astonishing Ant Man" Jack Longino
"We share the planet with millions of species, and many of them are insects," says Longino, professor and associate chair of biology at the University of Utah, Salt Lake City, and the adjunct curator of entomology at the university's Utah Museum of Natural History.

Longino, known by his students as "The Astonishing Ant Man," will present a seminar to the UC Davis Department of Entomology and Nematology from 12:10 to 1 p.m., Wednesday, May 27 in 122 Briggs Hall, Kleiber Hall Drive.

His topic: "Project ADMAC or Ant Diversity of the Mesoamerican Corridor."

Longino, who received his bachelor's degree in zoology, with distinction, in 1978 from Duke University, and his doctorate in zoology in 1984 from the University of Texas, Austin, traces his fascination with insects back to his childhood. He developed an  interest in ecology and the desire to explain patterns of diversity, so "I settled on ants as an ecologically dominant group of insects worthy of study."

"As it became clear that I was living during a time of enormous biotic change caused by human activities, I developed a strong conviction that it was important not only to understand patterns of diversity but to document it in detail for this time in history. I divide my time between two research fields: taxonomy and ecology. On the taxonomy side, I have coordinated large-scale inventories of Neotropical insect biodiversity, I discover and describe new species of ants, and I further refine our understanding of species ranges and morphological variability. I make use of advanced imaging technology, specimen-level databases, and Web-dissemination to make biodiversity data available to the widest audiences."

"On the ecology side, I use quantitative inventory techniques that allow analysis of diversity patterns. I am interested in how species are distributed on tropical mountainsides, what ecological factors explain the elevational range limits of species, and how species might respond to climate change."

What is the MesoAmerican corridor? It's a zone of complex tectonic history, episodic biotic interchange between large continents, and frequent mountain-building," Longino says. "Ants blanket this landscape, forming a tapestry of fine-scale habitat specialization and geographic replacement. Many taxonomists have contributed to the description of species in the region and this fundamental 'biodiversity mapping' continues apace. Project ADMAC (Ant Diversity of the MesoAmerican Corridor) combines morphological analysis with large-scale DNA sequencing (targeted enrichment of Ultra-Conserved Elements) to reveal the evolutionary history and geographic structure of ant species in MesoAmerica."

"Ants show very strong patterns of elevational specialization and geographic turnover, and Project ADMAC will address questions of (1) how and when montane species evolve, (2) the effects of differing mountain ages on communities, (3) the impact of lowland barriers on montane ant dispersal, and (4) whether ants experienced a major biotic interchange on the closure of the Panamanian isthmus."

National Public Radio interviewed Longino in August of 2013  on his research. He told NPR he started out collecting stamps in his childhood, but that bored him. He decided to "get small."

"If you're shopping for a home entertainment system," he says, "you can't do better than a good dissecting microscope," he said. At the time of the NPR interview, Longino had just published two papers describing 33 new species of ants, bringing his personal "new species" total to 131, NPR reported. In the article, Longino described himself as "average" among entomologists, pointing out that some entomologists have described thousands of new species.

And if you want to know about ants, you can download Dr. Eleanor's Book of Common Ants for free at http://ants.yourwildlife.org/dr-eleanors-book-of-common-ants/. It's the work of science writer Eleanor Spicer Rice, noted insect photographer Alex Wild, and designer Neil McCoy.

Be sure to check out Alex Wild's Myrmecos blog at http://www.myrmecos.net/ for amazing ant photos and educational information. He holds a doctorate in entomology from UC Davis (major professor Phil Ward) and is now curator of Entomology in the College of Natural Sciences, University of Austin--the university where Longino received his doctorate. 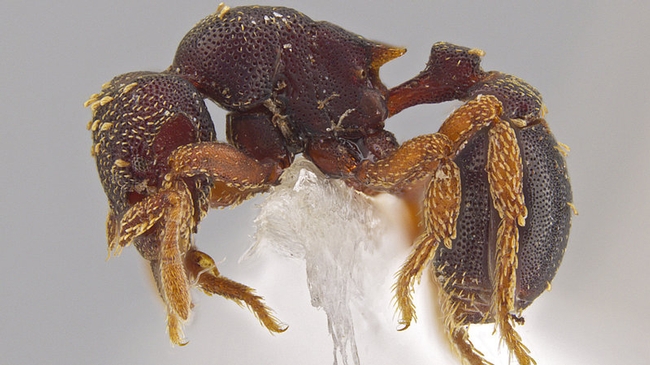