“You’re not going to be able to jump on the pomegranate bandwagon with your pockets bulging with gold without a lot of hard work,”  Kevin Day, farm advisor with UC Cooperative Extension Tulare County, told a reporter for a news story published May 14 in the Western Farm Press.

“We’ve doubled in three years, and that’s a lot of young pomegranate trees,” he said.

And that's a lot of work for the honey bees, too.

Our "orchard" of one pomegranate tree is buzzing with bees.

Just when we thought they'd forgotten their old buddy--"old" because the pomegranate tree was planted in 1927--here they come in the late afternoon. One by one, two by two, they head for the blossoms to gather the nectar and roll in the pollen of the papery blossoms.

Gold may bulge from the pockets of pomegranate orchardists, but a different kind of gold bulges from the honey bees--pollen. 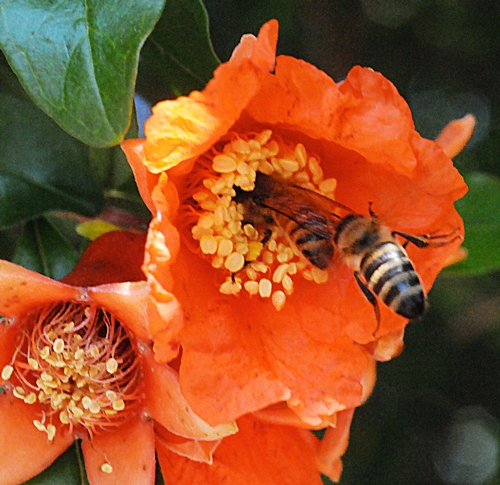 Get in Line
A honey bee works a pomegranate blossom, while another bee moves in right behind her. (Photo by Kathy Keatley Garvey) 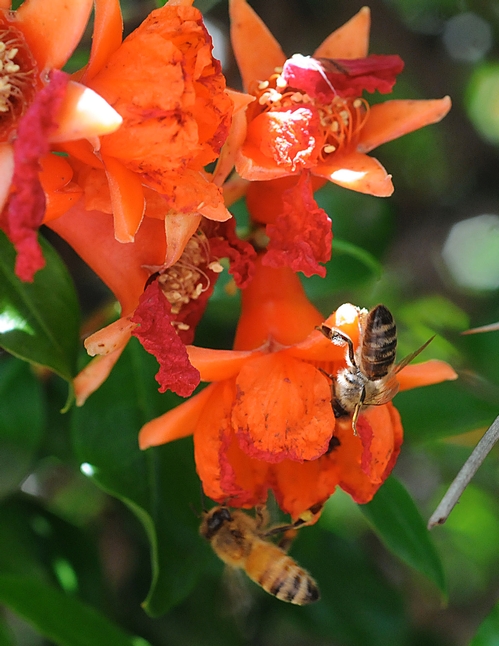