Biologist Scott Carroll (Photo by Jenella Loye)
If you like corn, you should be concerned about a pest that's known as "the billion-dollar beetle."

The  Western corn rootworm is called that because its larvae ravage America's corn crops to the economic tune of $1 billion a year.

Enter a team of nine researchers, including UC Davis biologist Scott Carroll. They analyzed data over a six-year period and concluded that crop rotation works well in battling the notorious pest that annually causes $800 million in yield loss and $200 million in treatment costs.

“Answering this question was important not only to grower success but the agricultural economy, said Carroll, an associate of the UC Davis Department of Entomology and Nematology and owner of the Davis-based Institute for Contemporary Evolution. “Bt crops are far-and-away the single most important factor reducing soil and crop insecticide applications in the United States at present.”

When Bacillus thuringiensis (Bt) corn was introduced in 2003, the pest seemed under control. The genetically engineered corn is a transgenic, insecticidal crop that kills rootworm larvae but is harmless to humans.

However, when the pest began developing resistance to the Bt corn toxins, the U.S. Department of Agriculture recommended crop rotation as a method of control. Crop rotation, an age-old agricultural tactic, is a consistent and economical means of controlling rootworms the season following an outbreak. It reduces rootworm densities, and is considered more effective than insecticides.

With crop rotation, “the frequency of problem fields declined by 92 percent in 2014 to 2016 relative to 2011 to 2013,” the nine-member team wrote in the research article, “Crop Rotation Mitigates Impacts of Corn Rootworm Resistance to Transgenic BT Corn,” in the current edition of the Proceedings of the National Academy of Sciences.

“Corn rootworm is one of the nation's most devastating pests, giving a sense of urgency to protecting the efficacy of industrial pest control approaches with reduced non-target effects,” said Carroll, who studies basic and applied aspects of evolutionary biology. “Transgenic insecticidal Bt crops in the United States are cultivated under a very interesting socio-evolutionary model of resistance management that is mandated by the U.S. Environmental Protection Agency. Individual growers must implement resistance management--usually by devoting a small acreage to planting a 'refuge' of non-Bt crops in order to nurture a local reservoir population of Bt-susceptible pest insects.”

Carroll pointed out that the “outstanding productivity of Bt corn has led a portion of growers to reduce or eliminate their required refuge planting. Moreover, many time-tested practices for integrated pest management have fallen by the wayside as growers have found they could rely solely on the genetics of the seemingly invulnerable Bt varieties.”

“As predicted, Bt resistance evolution in corn rootworm has accelerated. In response to this dire risk, in 2016 EPA began mandating crop rotation as a complementary means of reducing the damage to Bt corn fields caused by resistant corn rootworms. Our working group analyzed the success of this traditional agricultural tactic to help sustain the efficacy of the high-tech Bt tactic.”

Carroll said that under the leadership of his colleague Yves Carrière at the University of Arizona, “our team analyzed six years of field data from 25 crop reporting districts in Illinois, Iowa and Minnesota—three states facing some of the most severe rootworm damage to Bt cornfields.

“The answer we found is that traditional crop rotation is working to protect the Bt corn fields from rootworm damage, including in areas that have seen the evolution of behavioral resistance to crop-rotation by rootworms.”

The bottom line, said Carrière, is this: "Farmers have to diversify their Bt crops and rotate. Diversify the landscape and the use of pest control methods. No one technology is the silver bullet.”

The project also included scientists from North Carolina State and McGill University, along with Carroll's colleague, Peter Jørgensen of the Stockholm Resistance Center.

While Jorgensen was pursuing his master's degree program at the University of Copenhagen and studying at UC Davis, he worked with Carroll and Sharon Strauss of the Department of Evolution and Ecology.

“This PNAS paper,” Carroll said, “is one of several that have developed from a pursuit Peter and I organized on 'Living with Resistance' at the National Socio-Environmental Synthesis Center in Annapolis, with the aim to explore more sustainable approaches to managing evolutionary challenges to health and food security.”

"Transgenic crops that produce insecticidal proteins from Bacillus thuringiensis (Bt) can suppress pests and reduce insecticide sprays, but their efficacy is reduced when pests evolve resistance. Although farmers plant refuges of non-Bt host plants to delay pest resistance, this tactic has not been sufficient against the western corn rootworm, Diabrotica virgifera virgifera. In the United States, some populations of this devastating pest have rapidly evolved practical resistance to Cry3 toxins and Cry34/35Ab, the only Bt toxins in commercially available corn that kill rootworms. Here, we analyzed data from 2011 to 2016 on Bt corn fields producing Cry3Bb alone that were severely damaged by this pest in 25 crop reporting districts of Illinois, Iowa, and Minnesota. The annual mean frequency of these problem fields was 29 fields (range 7 to 70) per million acres of Cry3Bb corn in 2011 to 2013, with a cost of $163 to $227 per damaged acre. The frequency of problem fields declined by 92% in 2014 to 2016 relative to 2011 to 2013 and was negatively associated with rotation of corn with soybean. The effectiveness of corn rotation for mitigating Bt resistance problems did not differ significantly between crop-reporting districts with versus without prevalent rotation-resistant rootworm populations. In some analyses, the frequency of problem fields was positively associated with planting of Cry3 corn and negatively associated with planting of Bt corn producing both a Cry3 toxin and Cry34/35Ab. The results highlight the central role of crop rotation for mitigating impacts of D. v. virgifera resistance to Bt corn." 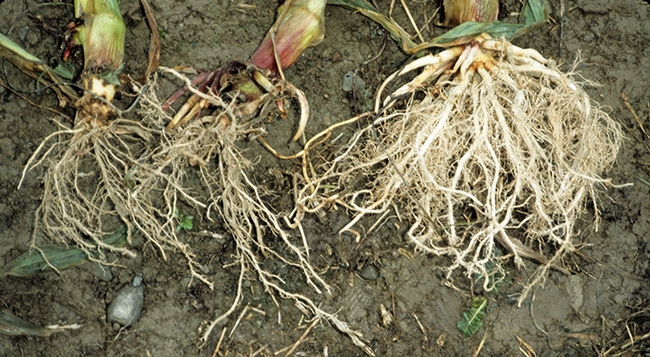 This image by Keith Waldron shows rootworm damage. The corn rootworm is a billion-dollar pest. 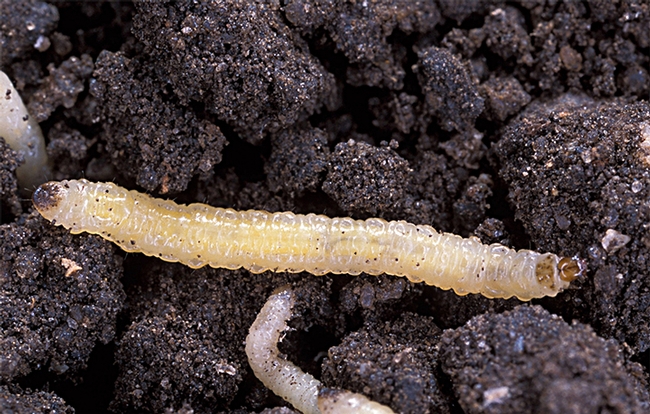 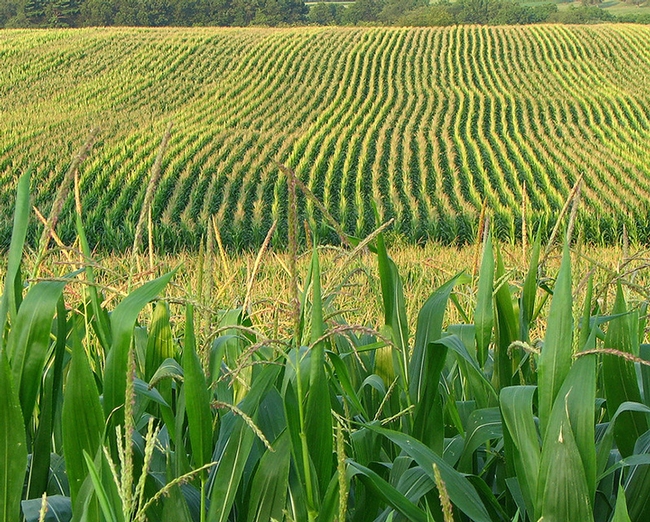