Bug Squad
sitenum=63
Happenings in the insect world
A World Without Mosquitoes? bugsquadtarathiemann
A world without mosquitoes?

An article in the July 21st edition of Nature asked that very question.

So, how about a world without mosquitoes? "Would anyone or anything miss them?" she asked.

Fang went on to ask scientists that very question. But the fact is, they're here and they're not going anywhere--except over here to bite us.

Tara Thiemann (top photo), a doctoral candidate studying with major professor William Reisen, received $2100 for her statewide research on bloodfeeding patterns of Culex mosquitoes. She studies both urban and rural populations of mosquitoes and their host meals.

Jenny Carlson (bottom photo), an incoming doctoral student who will be studying with major professor Anthony 'Anton' Cornel, received $2000 for her research on avian malaria parasites.

Thiemann's project involves analyzing the blood meals of Culex mosquitoes to identify specific host species--research important toward understanding both the maintenance and epidemic transmission of the West Nile virus.

bugsquadjennycarlson
Carlson’s research will take her to West Africa where she will collect mosquito vector and avian blood samples to study the  mechanisms of malaria parasite transmission. She hypothesizes that the diversity of mosquito and avian parasites will be lower in deforested areas than forested areas.

The award memorializes William “Bill” Hazeltine (1926-1994), who managed the Lake County Mosquito Abatement District from 1961-64 and the Butte County Mosquito Abatement District from 1966-1992. He was an ardent supporter of the judicious use of public health pesticides to protect public health. He continued work on related projects until his death in 1994.

Hazeltine studied entomology in the UC Berkeley graduate program from 1950-53, and received his doctorate in entomology from Purdue University in 1962.

It's good to know that Hazeltine's cause lives on through his family's generosity. 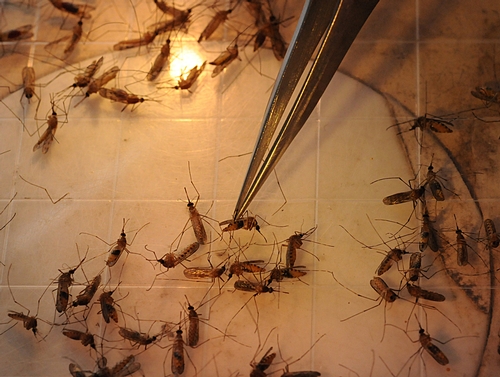