An article posted on the ScienceNews Web site today indicates that North America did, too, have a honey bee.

For nearly 400 years, we've been told that the honey bee (genus Apis) did not exist on this continent until 1622. That's when the colonists brought it over from Europe.The Native Americans dubbed it "the white man's fly."

Honey bees existed at least 14 million years ago in North America, according to a fossil record recently identified by paleontologist-entomologist Michael Engle of the University of Kansas, Lawrence. The fossilized female worker bee, now at the California Academy of Sciences, San Francisco, was unearthed in paper shale from Stewart Valley, west-central Nevada. The geological epoch: Middle Miocene.

Engle, the lead author of research published in the May 7th edition of the Proceedings of the California Academy of Sciences, says the bee is definitely a honey bee. It has the distinctive hairy eyes, wing patterns and barbs on the stinger.

Unfortunately, this ancient bee--which Engle and his colleagues have named Apis nearctica--no longer exists. The researchers say it's most similar to the extinct species, Apis armbrusteri Zeuner from the Miocene epoch of southwestern Germany.

Extension Apiculturist Eric Mussen, a member of the UC Davis Department of Entomology faculty since 1976 and a noted authority on honey bees, tells us that "hairy eyes" is a distinctive feature of the honey bee. "All honey bees," he said, "have hairy eyes."

The Nevada bee certainly isn't the oldest known record of a fossilized bee. The oldest known bee is 100 million years old, found embedded in amber in Burma back in 2006.

But Apis nearctica is proof that North America was a native range of the honey bee. In the journal article, Engle says that "honey bees were likely truly absent" from North America duirng the Pliocense and Pleistocene, "not becoming reintroduced until the major European colonization of the New World in the early 17th century."

Fact is, the honey bee lived here, but it did not survive.

Which begs the question--OK, we have to ask--Was it some kind of a colony collapse disorder (CCD)? 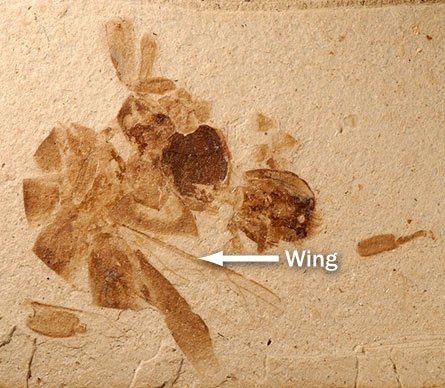 American Bee
This 14-million-old fossil, unearthed in Nevada, is a honey bee, proving that North America did have a honey bee before colonists brought the European honey bee here in 1622. (Photo courtesy of Michael Engle) 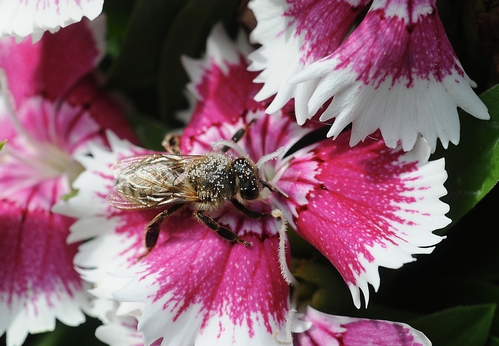