You can't always choose your tenants.

Sometimes they choose you.

Take the case of our two bee condos, which are blocks of wood drilled with holes for native bee occupancy. One, with the smaller holes, is for leafcutter bees (Megachile spp.) The other, with the larger holes, is for blue orchard bees (Osmia lignaria), fondly known as BOBs.

The webweaving spider spun its web and then crawled into the hole for the night to wait for morning.

And to wait for unsuspecting prey. 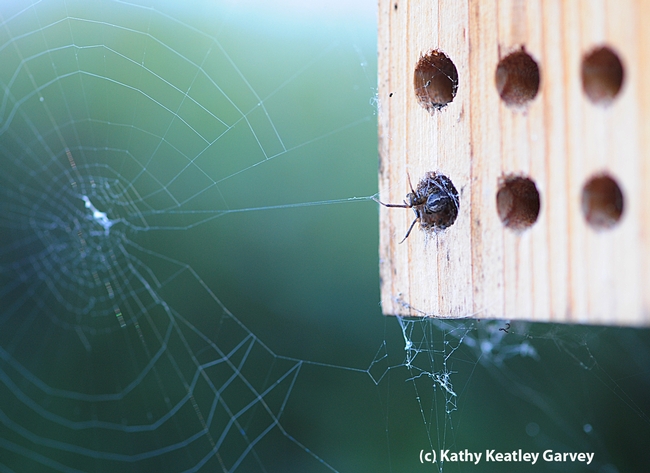 Webweaver spun a web and then crawled into the mason bee condo to occupy a hole. (Photo by Kathy Keatley Garvey) 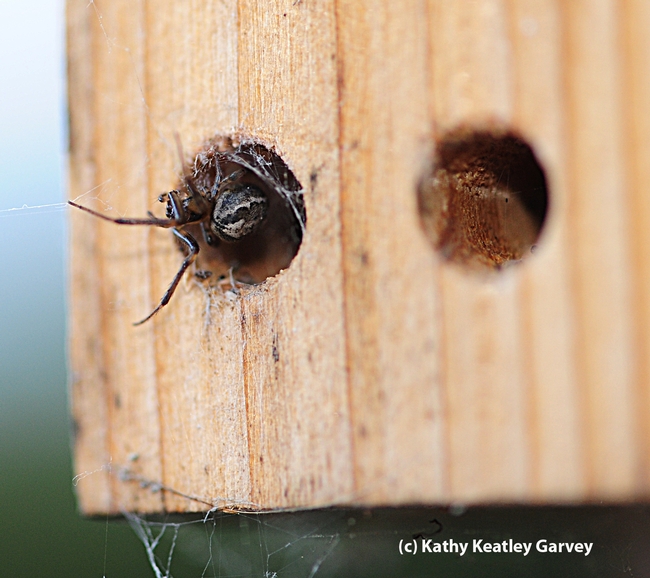 They flew in, laid their eggs, provisioned the nests with pollen and leaf fragments, and capped the holes.

Success! A leafcutting bee emerged.  Native pollinator specialist Robbin Thorp, emeritus professor of entomology at UC Davis, says that "Some leafcutting bees, especially the introduced ones like the alfalfa leafcutting bee, have more than one generation per year.  Bees of the second and third generation may clean out or partly clean out old nest holes like this and construct a new nest inside.  Sometimes you can find new leaf material inside the old cocoon of the previous nest builder.  Thus, the tunnels get smaller in diameter with succeeding generations.  Kind of like the build up of old cocoons in honey bee comb and resulting smaller inner diameter of the brood cells in old dark comb."

It's all rather exciting being a "beekeeper." We've never had a hole in one--'til now.

If you, too, want to keep native bees, Thorp has compiled a list of where you can buy homes for them or where you can learn how to build your own.  The list is on the Harry H. Laidlaw Jr. Honey Bee Research facility website.

You can also buy them at beekeeping supply stores. 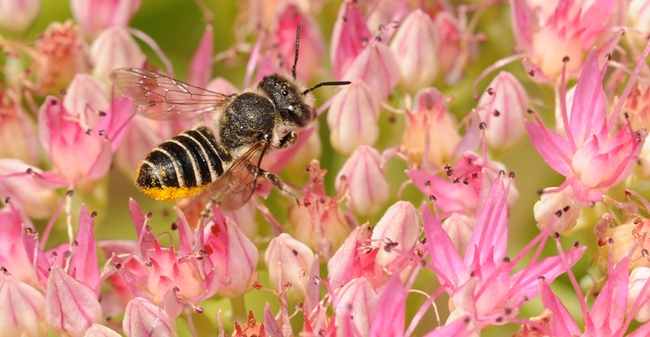 That's how many tenants are occupying our wooden bee block, aka "bee condo."

Folks who grow prize-winning roses--the kind that win blue ribbons at county fairs and rose shows--aren't fond of these little critters, but we are.

Especially when we see two leafcutters at the bee condo at the same time... 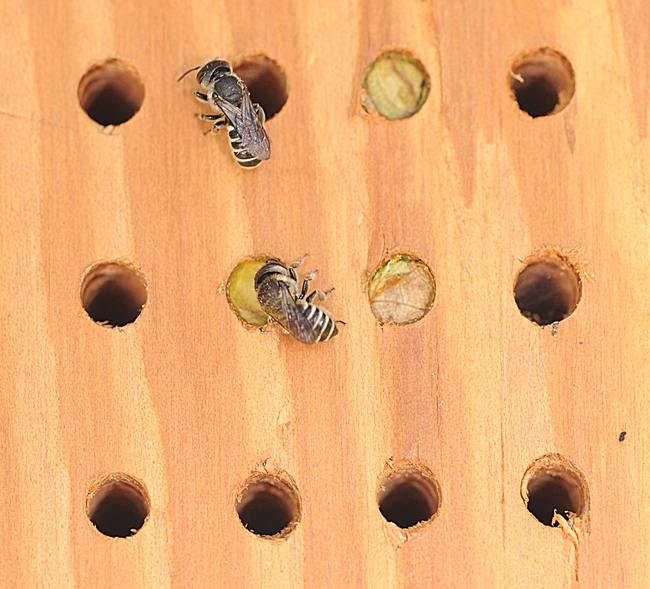 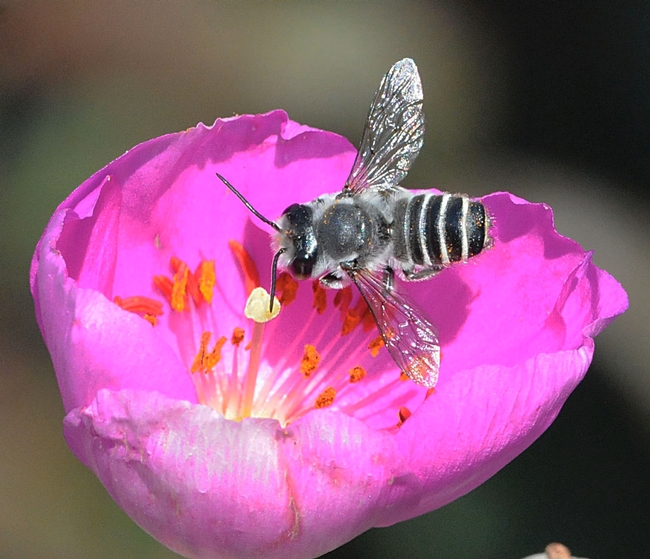 It's an artificial nesting site made of wood and drilled with different-sized holes and depths to accommodate the diversity of native pollinators. Often the bee block is nailed to a fence post. Native bees, such as leafminer bees and blue orchard bees, build their nests inside the holes.

Members of the Xerces Society, an international organization "dedicated to protecting biological diversity through invertebrate conservation," are keen on protecting the habitat of native bees and other native invertebrates. As part of their public outreach program, they publish books, pamphlets and fact sheets. These include  Pollinator Conservation Handbook, Farming for Bees, and the fact sheet, Bumble Bees in Decline.

As for the bee condos, thousands are sold each year in the United States, according to entomologist Mace Vaughan, pollinator program director of the Xerces Society, based in Portland, Ore. As concern for the environment grows, more and more farmers and urban gardeners want to attract and accommodate the native bees. Native bees are important crop pollinators, Vaughan says, and the work people do on behalf of the pollinators also supports other beneficial insects and wildlife.

Vaughan, who escorted a group of us on a recent Yolo County farm tour, said many of our native bee species are much more efficient than honey bees at pollinating some crops.

"For example, only 250 female orchard mason bees (genus Osmia, also called blue orchard bees) are required to effectively pollinate an acre of apples, a task that would require 1.5 to 2 honey bee hives--approximatley 15,000 to 20,000 foragers." (Source: Farming for Bees, a Xerces Society publication.) 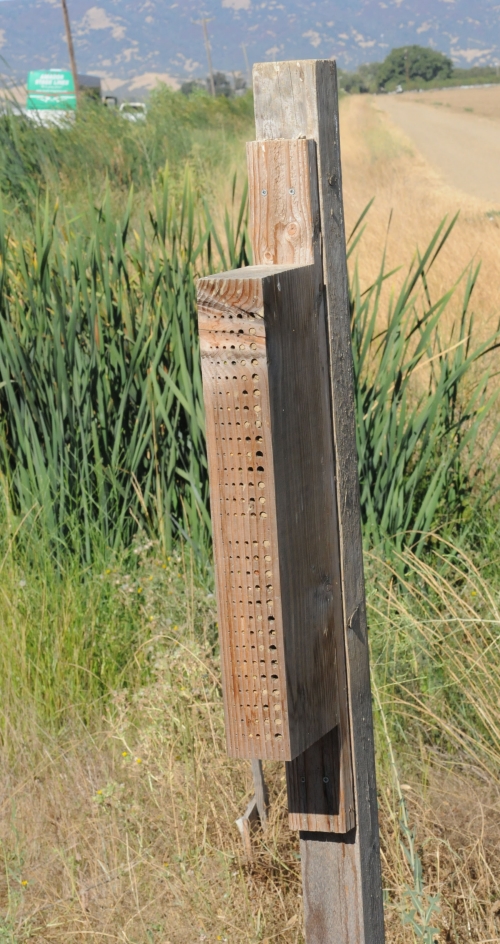 This is a bee nesting block built to attract native pollinators. (Photo by Kathy Keatley Garvey) 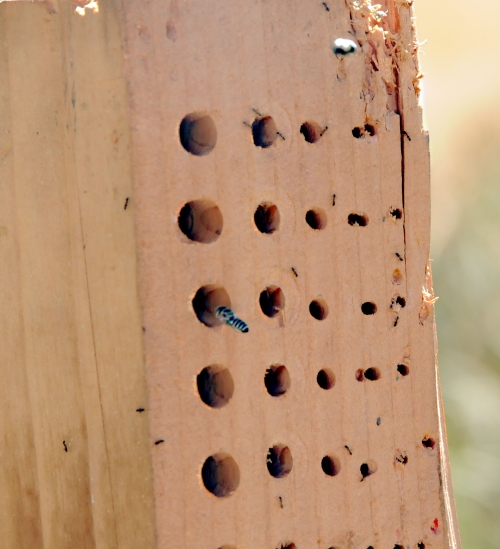 A female leafcutting bee heads for the bee nesting block. The holes are of different diameters and depths to attract a greater diversity of native bees.(Photo by Kathy Keatley Garvey) 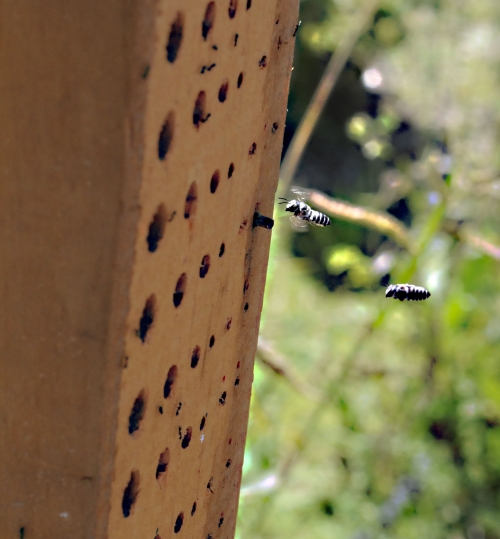