The milkweed is the larval host of the monarch butterfly, but other insects, including the honey bees, carpenter bees, leafcutter bees, and butterflies, stop by to sip some nectar.

The male Valley carpenter bee joined the party, and what a party it was. He bluffed his way past the other insects--boy bees do not sting as they have no stinger, as native pollinator specialist Robbin Thorp distinguished emeritus professor of entomology at the University of California, Davis, says.

A monarch fluttered in for a little nectar, too, but the teddy bear bee refused to budge.

When you're big, hungry, and a bluffer,  you can do that. 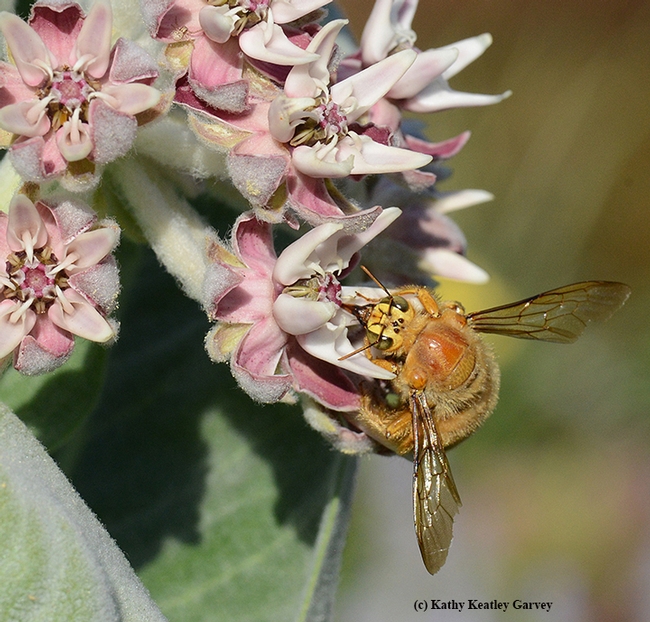 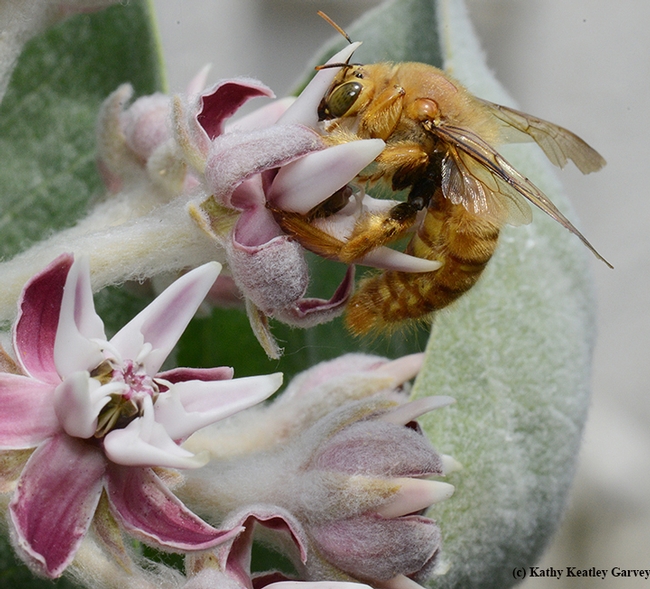 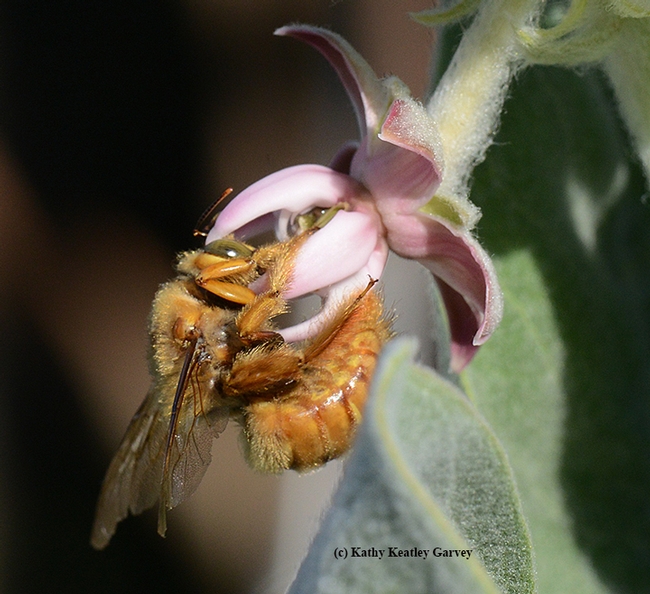 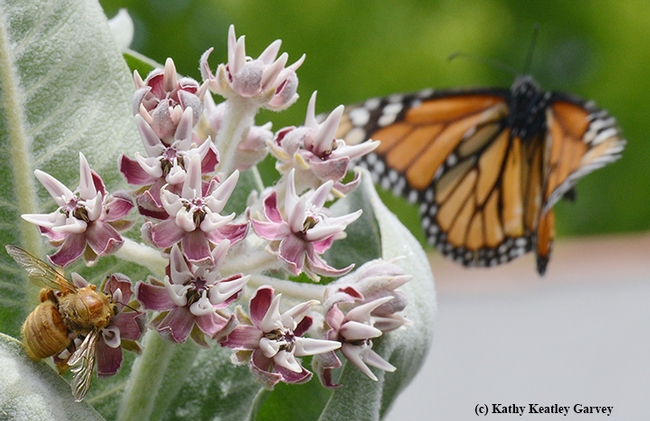 The honey bee struggled, but couldn't free herself from a broadleaf milkweed blossom in our pollinator garden.  Had a predator nailed her? Or was the bee dying of natural causes? What was happening?

Two hours later we returned. The bee, now in a frenzy, was still stuck. We offered her sips of honey from a coated toothpick.

"Ah, with that flight fuel, she'll take off," we thought.  She did not. Closer examination revealed her foot (tarsi) stuck in a mass of sticky pollen.

We separated the bee from her floral trap by lifting her from the gluelike pollinia with the toothpick. Off went the pollinia and off went the bee.

“If you hang around that milkweed, you might be able to get a photo of a bee carrying pollinia on its foot,”  Extension apiculturist (emeritus) Eric Mussen of the UC Davis Department of Entomology and Nematology told us.

Unlike most flowering plants, only milkweed and orchids produce pollinia, which is a sticky packet of golden pollen grains originating from a single anther. The  wishbone-shaped pollinia are in a nectar trough where insects--or parts of them--often get trapped.  This is a devious way for milkweed and orchids to force insects to “take me with you” and “help us reproduce.”  If you're a small insect and/or not strong enough to loosen the grip, you'll be lodged in that sticky mass and die. It's sort of like jumping into quicksand and you can't get out. Some insects manage to escape but their parts remain. That's probably one reason why you see "amputated" bumble bees, carpenter bees, honey bees and butterflies, no thanks to the Sophisticated Reproductive Habits of the Milkweed (and Orchids).

The milkweed plant is not only the larval host--and only larval host--of the monarch butterflies, but it's a nectar source for butterflies and for many other insects--including honey bees, leafcutter bees, bumble bees, carpenter bees, syrphid flies and ants.

In fact, if you look closely at a broadleaf milkweed blossom (Asclepias speciosa), you'll see dozens of tiny pink flowers forming the umbel or umbrella-shaped structure. The corona, located on top of the petals, holds a circle of five hoods and five horns. Hoods and horns pointing the way. The hoods that hold that oh-so-sweet nectar beckon insects like a kid to a candy store. Each blossom has five vertical slits which house the reproductive organs.

So, what was happening? Ms. Honey Bee, seeking nectar for her colony, hit a sweet jackpot and repositioned herself to gather it. Then her foot slipped into one of the five sticky slits and she couldn't remove her leg.

Ms. Honey Bee survived, thanks to a human being with a toothpick. Others are not so lucky. 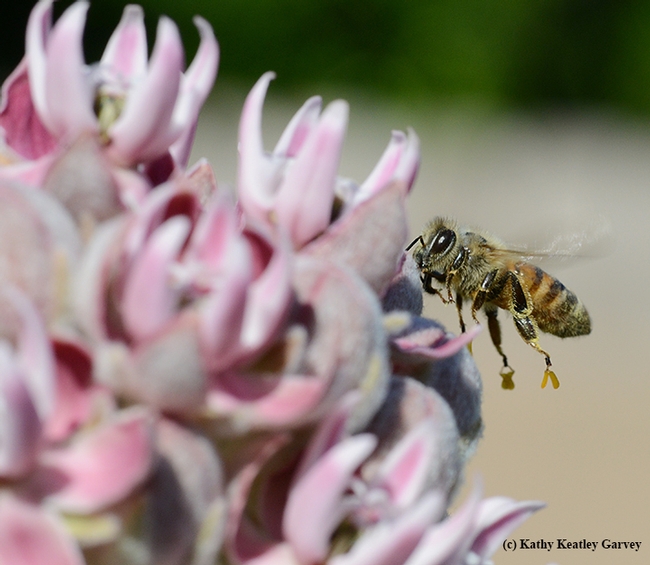 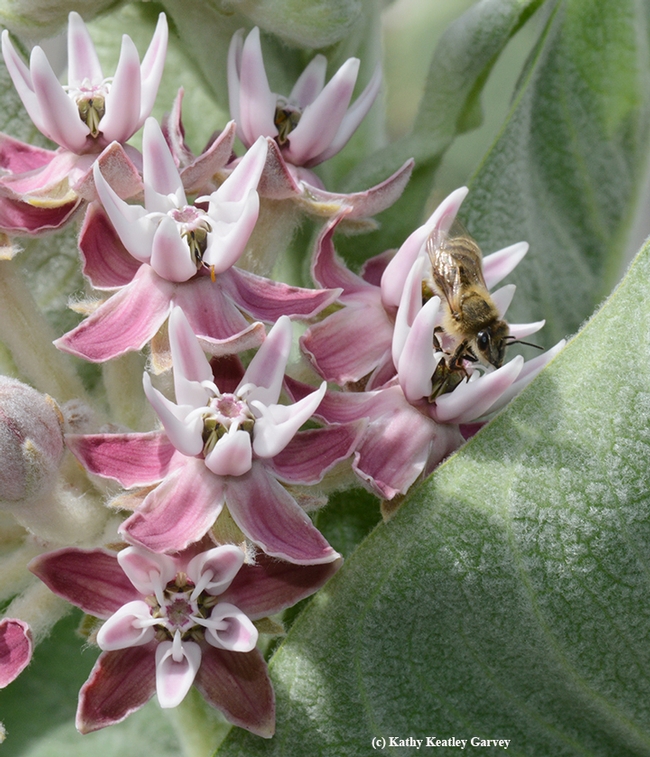 IIt's easy to get trapped in the sticky reproductive structure of a milkweed. This one was stuck for two hours.(Photo by Kathy Keatley Garvey) 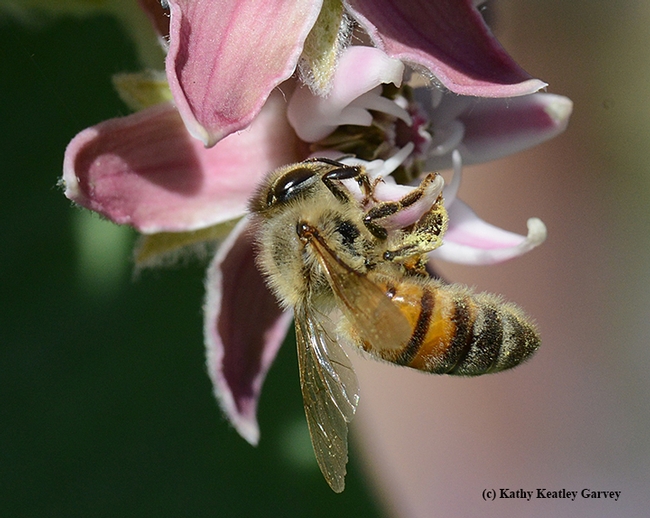 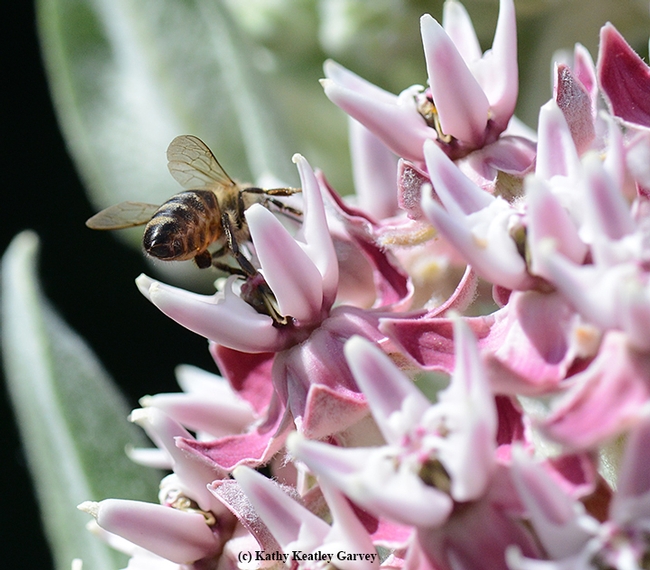 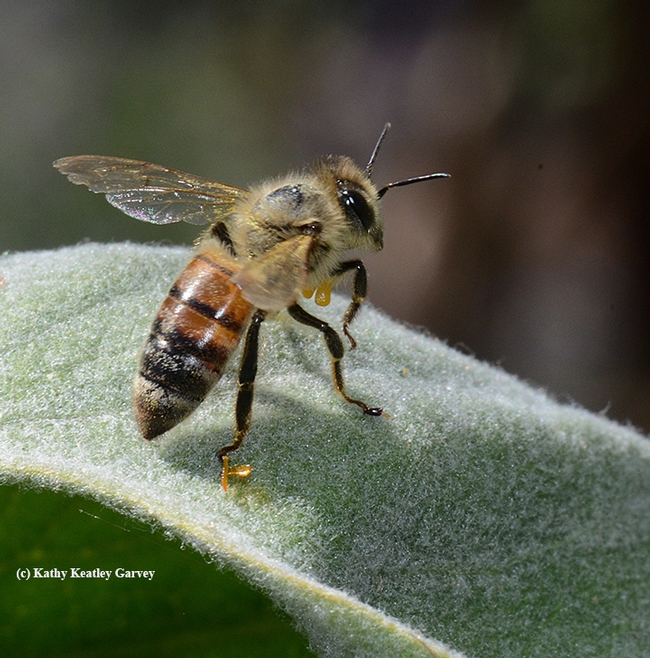 If you grow milkweed in your yard, you probably have some very special tenants, monarch butterflies (Danaus plexippus). As just about every kindergarten student knows, milkweed (Asclepias spp,) is their larval host plant. Without milkweed, no monarchs.

Carl Linnaeus named the genus for the Greek god of healing, Asciepius. The son of Apollo, Asciepius was a hero and god of medicine in ancient Greek religion and mythology, according to Wikipedia.

For the past week, we've been watching a male monarch loop around our pollinator garden in search of females. Yes, it  "floats" just like the late Muhammad Ali said a butterfly does.  Several loops later and it needs more flight fuel. It zip-zags down, sips some nectar from the six-foot-high broadleaf milkweed (Asclepias speciosa), or drops down to the lower elevation of a Jupiter's Beard. Then it's off again.

It's like watching a work of art--an exquisite stained glass window--take flight, touch down, and feed. The adults will feed on many nectar plants but their caterpillars will feed only on milkweed.

Like to help the monarchs and plant milkweed? See the Xerces Society's Project Milkweed. 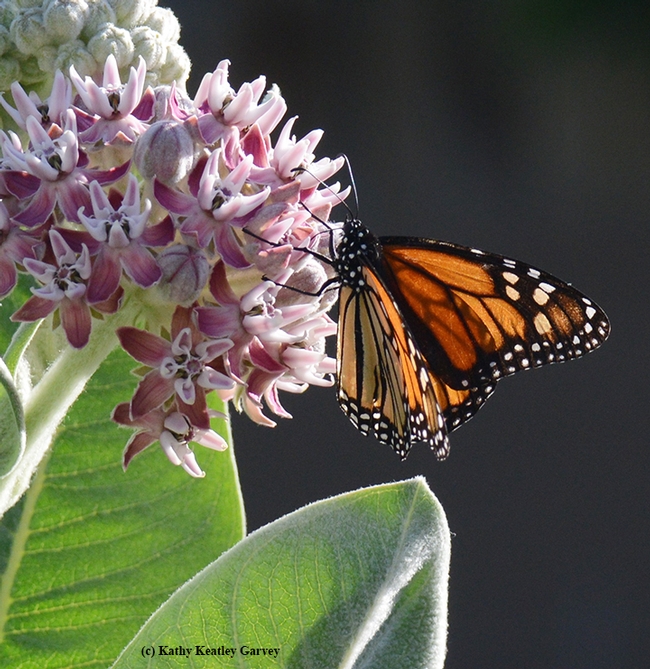 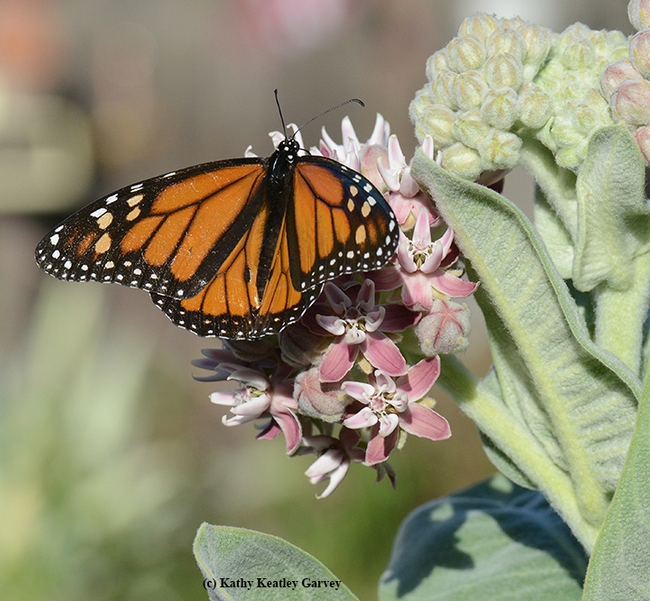 The milkweed is so named for its milky juice, consisting of a latex containing alkaloids and other complex compounds. Carl Linnaeus named the genus for the Greek god of healing, Asciepius. (Photo by Kathy Keatley Garvey) 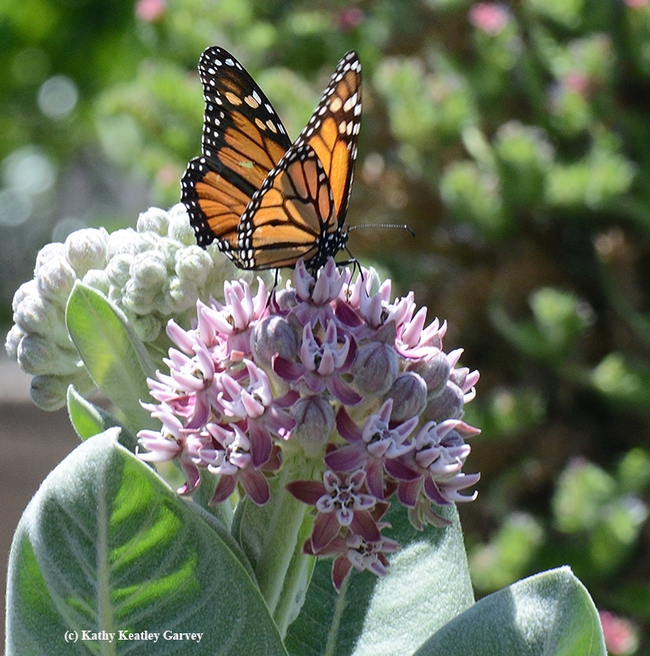