Bruce Hammock, founder and CEO of EicOsis and Cindy McReynolds, senior program manager, with the trophy. (Photo by Kathy Keatley Garvey)
UC Davis distinguished professor Bruce Hammock, who holds a joint appointment with the UC Davis Department of Entomology and Nematology and the UC Davis Comprehensive Cancer Society, is known for his expertise in chemistry, toxicology, biochemistry and entomology. He meshes all four sciences in his 50-year research on how environmental chemicals impact human health.

And now, the company he founded, EicOsis LLC, to develop a non-opiate drug to relieve inflammatory pain in companion animals and target chronic neuropathic pain in humans and horses, can add “Sacramento Region Innovator of the Year” to its list of accomplishments.

The ceremony, honoring the winners of the eight categories, took place Nov. 7 in the Crest Theatre, Sacramento. Judges scored the finalists on novelty, market need, economic or social impact and disruption. (See more information on YouTube (the EicOsis award presentation starts at 1:05.) The plaque says it all. (Photo by Kathy Keatley Garvey)
EicOsis, based in Davis, is developing a new class of oral non-narcotic analgesics based on inhibition of the soluble epoxide hydrolase (sEH) enzyme. The sEH inhibitors have already shown to be effective for inflammatory and neuropathic pain in the rodents, horses, dogs and cats, with no apparent adverse or addictive reactions. 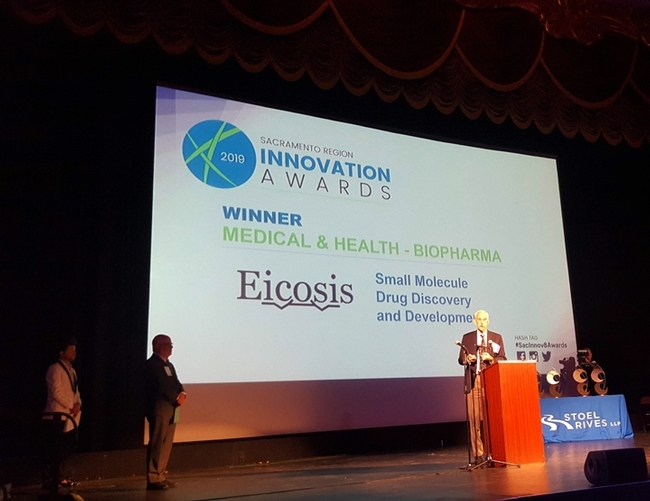 Bruce Hammock, UC Davis distinguished professor of entomology who holds a joint appointment with the UC Davis Comprehensive Cancer Center, is fond of saying that in his many talks.

"Science is full of surprises."

His research clearly shows that basic science can lead to surprising findings.

As an aside, Hammock suggested to communication specialist Karri Stock that the story could include a photo of a caterpillar and a butterfly, and did I have one?

I did, thanks to the Gulf Fritillary (Agraulis vanillae) population explosion on our passionflower vine (Passiflora). A caterpillar was doing what caterpillars do. Then two butterflies came along and started doing what males and females do. The three-in-one photo illustrates the article, along with a photo of Hammock and collaborator John Imig, professor of pharmacology and toxicology at the Medical College of Wisconsin, Milwaukee.

The gist of the news story is that Imig received a $2.3 million grant from the National Institute of Diabetes and Digestive and Kidney Diseases "to investigate the development of a drug to treat type 2 diabetes and metabolic syndrome."

"But what we didn't tell you is that this translational grant is all thanks to some caterpillars in California and decades of research," Stock wrote. "It's a tale of pure curiosity with a great lesson for budding scientists and the public alike: You can't always predict where basic science discoveries will lead."

A native of Little Rock, Ark., Bruce earned a bachelor's degree in entomology from Louisiana State University in 1969 and his doctorate in entomology/toxicology from UC Berkeley in 1973, and then accepted a Rockefeller Postdoctoral Fellowship at Northwestern University. Hammock served as a member of the UC Riverside faculty for six years before joining UC Davis in 1980. In addition to maintaining a vigorous research program, Hammock teaches, mentors students, works with visiting scholars and enjoys rock climbing and kayaking.

And if you get a chance to hear him speak about his research, he's likely to say:  "Science is full of surprises." 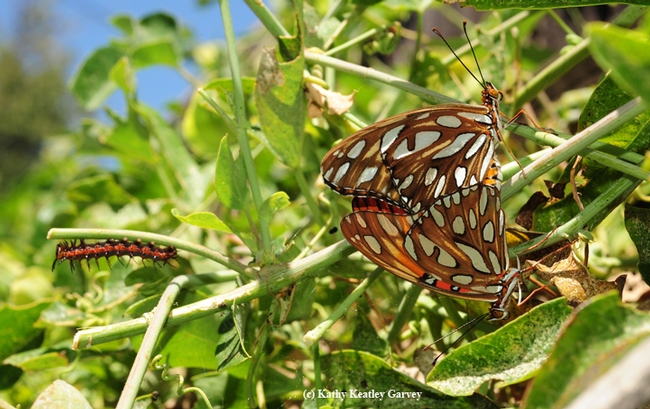