Foxgloves are called "the lurking place of the fairies."

Foxgloves are also known by their genus name, Digitalis--meaning fingerlike. The genus is native to western and southwestern Europe, western and central Asia, Australasia and northwestern Africa.

Question: Have you ever pulled off the flowers and gloved them on your fingers? Probably. Not good for the plant, but what fun!

The common foxglove, Digitalis purpurea thrives in a shady spot in our yard. The honey bees and carpenter bees love it, as does a single earwig, which apparently considers it its "hidey hole."

How did it get its name? Legend has it that a botanist Fuchs first named it and the name corrupted or morphed into foxglove, according to Wikipedia. "It happens, moreover, the name foxglove is a very ancient one and exists in a list of plants as old as the time of Edward III."

Reports Wikpedia: "The 'folks of our ancestors were the fairies and nothing is more likely than that the pretty coloured bells of the plant would be designated 'folksgloves,' afterwards, 'foxglove.' In Wales it is declared to be a favourite lurking-place of the fairies, who are said to occasion a snapping sound when children, holding one end of the digitalis bell, suddenly strike the other on the hand to hear the clap of fairy thunder, with which the indignant fairy makes her escape from her injured retreat. In south of Scotland it is called "bloody fingers" more northward, "deadman's bells" whilst in Wales it is known as "fairy-folks-fingers" or "lambs-tongue-leaves."

No matter the origin, the exotic-looking freckled purple foxgloves will long be a favorite--not just by us, but by all the pollinators.

And a few earwigs. 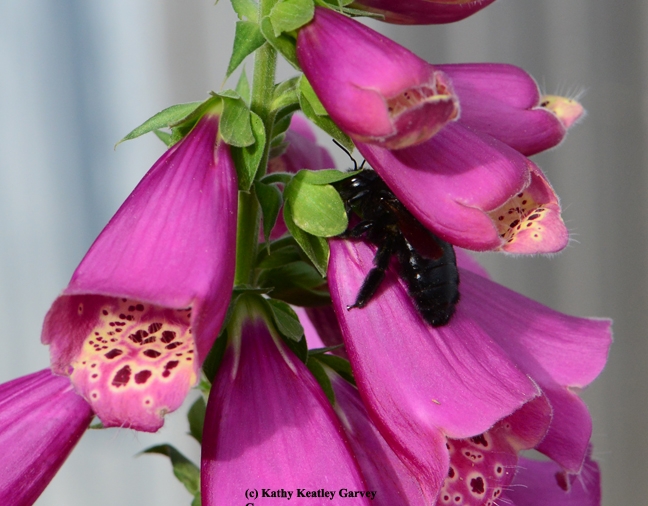 A Valley carpenter bee appears to be "nectar-robbing," drilling a hole through the flower instead of going into the entrance. (Photo by Kathy Keatley Garvey) 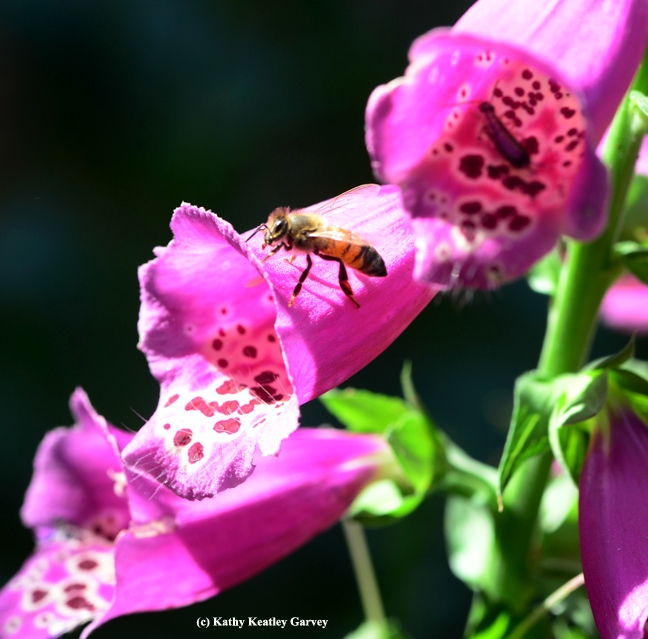 A honey bee seeks an entrance into the foxglove. (Photo by Kathy Keatley Garvey) 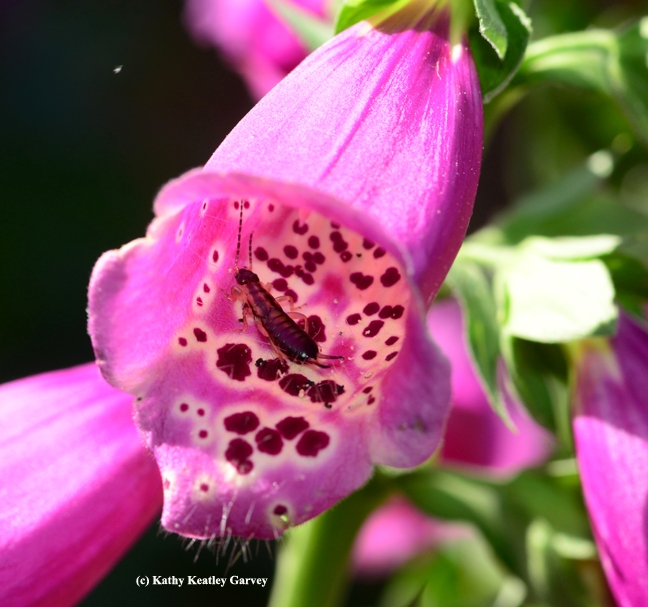