William Meikle's research involves solar panels and bee colonies in an almond orchard.
It promises to be a fascinating talk.

His seminar, open to all interested persons, will take place from 4:10 to 5 p.m. in 122 Briggs Hall, Kleiber Hall Drive.

Meikle, who joined the Carl Hayden Bee Research Center in 2012, conducts research on continuous monitoring of weight, temperature, humidity, CO2 concentration, and other parameters in honey bee colonies, linking those data with bee colony growth and activity. "I am currently involved in investigating how various stressors, including disease incidence, nutritional stress and agrochemical exposure manifest themselves at the colony level," he says.

"Individuals are the fundamental units of the social insect colony and are thus logical subjects for the study of those colonies," Meikle explains in his abstract. "However, such colonies also exhibit emergent properties or behaviors, such as forager traffic and brood nest temperature control in this case honey bee colonies, that can only be measured using colonies or groups of bees."

"Honey bee colonies offer singular opportunities for study because they can be taken apart with little or no adverse effects, and because they are typically stationary and so can easily be fitted with sensors or placed permanently on electronic scales. The resulting continuous sensor data, such as the weight and temperature data we have focused on, provides information on colony behavior and on how colonies respond to changes in the environment. The idea is that once we know how to interpret continuous data, we can then collect continuous data as response variables in manipulative experiments."

Meikle received his bachelor's degree in biology from Pomona College, Claremont, in 1982, and his doctorate in entomology from UC Berkeley in 1992. His career took him from UC Berkeley to the West African country of Benin, then to France, then back to the United States--Texas and Arizona.

After earning his doctorate at UC Berkeley, Meikle served as a scientist and postdoctoral fellow from 1992 to 2001 at the International Institute of Tropical Agriculture (IITA), Calavi, Benin, where he developed an ecological and economic framework of stored product systems in West Africa, including population models of important pests (larger grain beetle and maize weevil), natural enemies (including insects and insect pathogens), sequential sampling plans and scouting programs for farmers, and links of pest population dynamics to weather and to local commodity prices.

Meikle's seminar, hosted by the UC Davis Department of Entomoogy and Nematology, is the last seminar of the winter quarter. Agricultural entomologist Christian Nansen (chrnansen@ucdavis.edu), assistant professor in the department, coordinates the seminars. They are recorded for later viewing on UCTV. 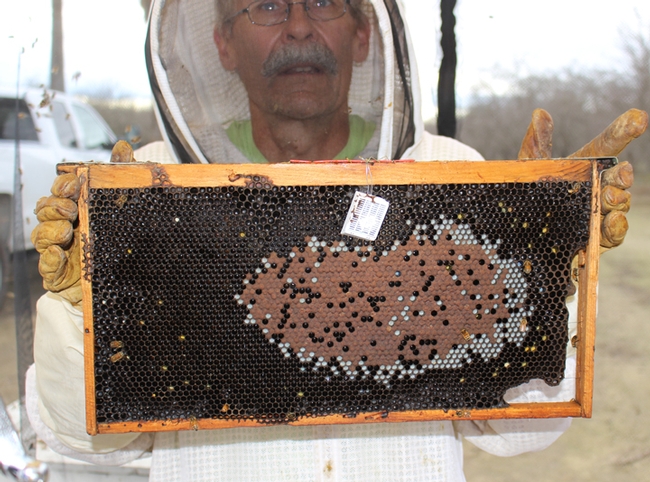 Research entomologist William Meikle of the Carl Hayden Bee Research Center, USDA-ARS, holding a frame which has a temperature sensor. 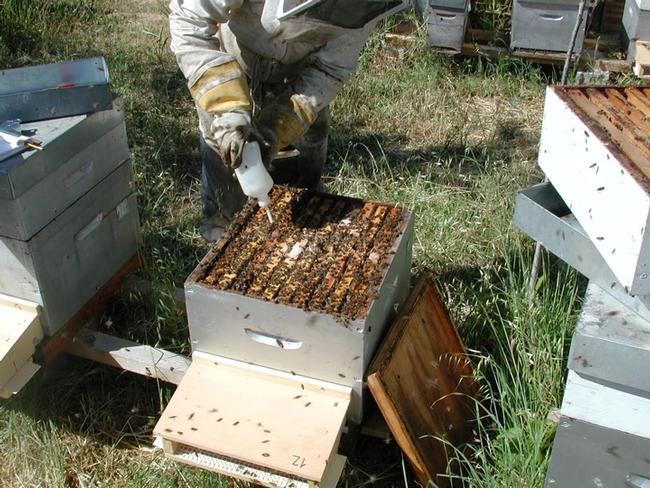 "R" is for research at the Harry H. Laidlaw Jr. Honey Bee Research Faciity at the University of California, Davis.

The Laidlaw facility is a nexus for diverse bee research and scientists from throughout the world.

A poster hanging in the Laidlaw facility explains: "We provide cutting-edge research on basic bee biology, genetics, pollination and conservation. We address international concerns about bee health and meet the needs of California's multibillion dollar agriculture industry. Our program combines research on honey bees and native species to promote sustainabiity of pollinators and pollination."

Native pollinator specialists: Robbin Thorp, emeritus professor; and Neal Williams, assistant professor. Thorp "officially" retired in 1994 but continues to conduct research on bees (Apoidea) with a focus on native bees, their ecology, systematics, biodiversity, conservation and pollination relationships. Williams says his lab "explores fundamental questions about the evolution and ecology of bees and pollination as well as applied research on crop pollination and native bee conservation within the context of global change and agricultural sustainability."

Visiting scientists:
Claire Kremen, a conservation biologist at UC Berkeley, is closely associated with UC Davis.  Her Berkeley lab explores "the conservation and sustainable management of ecosystem services such as pollination and pest control in agricultural settings."  Her group is involved with several research projects through the Laidlaw facility.

Other visiting scientists include Stephen Hendrix of the University of Iowa; Susan Monheit, UC Davis; Lora Morandin, UC Berkeley; and Alexandra Klein and Claire Brittain, both with the University of Goettingen, Gemany.

Another exciting research program at UC Davis involves the aging and lifespan of the honey bee. Robert Page, former professor and chair of the UC Davis Department of Entomology and now founding director of the School of Life Sciences at Arizona State University, is a co-principal investigator on this research. It's part of the federally funded Biodemographic Determinants of Lifespan, directed by UC Davis entomology professor James R. Carey.

Another highlight at the Laidlaw facility is the newly planted Häagen-Dazs Honey Bee Haven, a half-acre bee friendly garden designed to be a year-around food source for bees and an educational experience for visitors. Also new is the Campus Buzzway, a quarter-acre wildflower garden to be planted this fall. 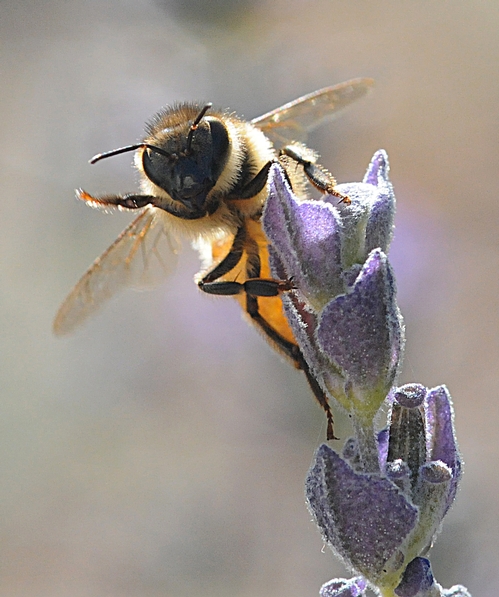 “We’re hoping that Michelle Flenniken’s expertise in molecular virology will lead to understanding one of the factors contributing to colony collapse disorder and lead to strategies that increase honeybee survival,” said Lynn Kimsey, chair of the UC Davis Department of Entomology and director of the Bohart Museum of Entomology.

Flenniken, who received her doctorate in microbiology in 2006 from Montana State University, will continue working in the Andino lab and also with researchers at the Harry H. Laidlaw Jr. Honey Bee Research Facility at UC Davis.

Skilled in multidisciplinary research (molecular biology, microbiology, chemistry and cell biology), Flenniken is focusing on the biology of honeybee viruses, specifically the role of RNA interference (RNAi) in the honeybee antiviral immune responses. RNAi is a mechanism that inhibits gene expression.

Lately she's has been identifying the viruses present in the hives of San Francisco Hobby Beekeepers and research collaborators.

Viruses are not difficult to find. “Most bees have viruses, particularly common is Kashmir bee virus,” said UC Davis apiculturist Eric Mussen. “In fact, we’d be surprised to find a bee not carrying some type of virus.”

We thank Häagen-Dazs for their concern. Like all of us, Häagen-Dazs loves honey bees. The company, which depends on bees to pollinate the fruits, nuts and berries used in its ice cream, announced in February it would donate a total of $250,000 to UC Davis and Penn State to address the bee population decline. Very welcome, indeed!

Häagen-Dazs’s Web site, www.helpthehoneybees.com/, offers an insight into how much we need the bees and what we can do to help. It links to a UC Davis Web site where folks can donate online to save the bees. (See "Save the Honey Bees" under "Quick Links" at http://entomology.ucdavis.edu/home.cfm)

Three of our UC Davis scientists--Mussen, bee breeder-geneticist Susan Cobey, and entomologist Michael Parrella, associate dean of the College of Agricultural and Environmental Sciences--serve on the company's advisory board.

Did you catch the full-page Häagen-Dazs ad in the June 9th edition of Newsweek? The headline says it all: “Honey, please don’t go!” 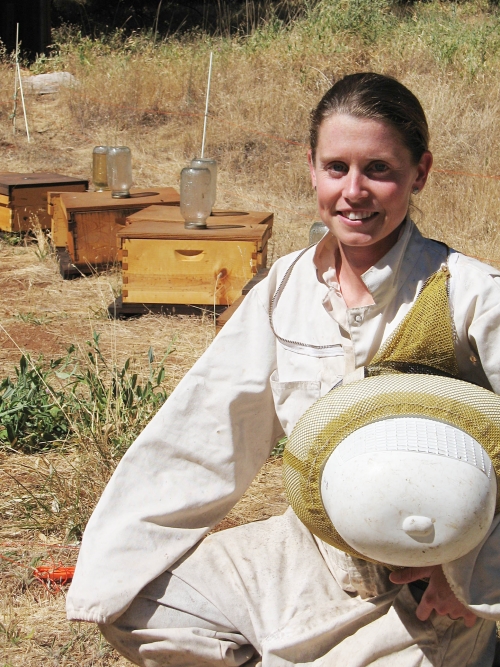 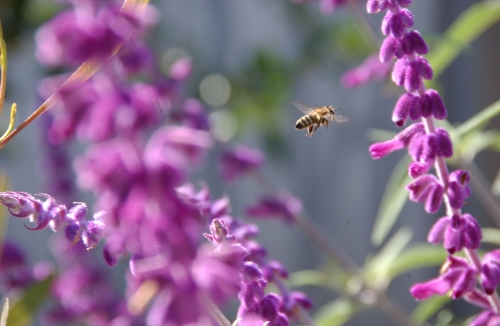