If you vacationed at Doran Regional Beach, Bodega Bay, on a Wednesday last year (pre-COVID-19 pandemic), chances are you saw scores of dedicated volunteers pulling out the invasive ice plant, Carpobrotus edulis, along 201 Doran Beach Road.  It's hard work but it's rewarding.

C. edulis, a succulent native to South Africa, is unwanted in Bodega Bay's wetlands because it chokes out native, endangered plants and alters the soil composition. When it's removed, native plant species return as do a diversity of wanted wildlife.

Yes, nurseries sell ice plant as a ground cover because it's hardy, easy to grow, and spreads quickly. The neon pink blossoms, in particular, are spectacular. (See photo)

C. edulis, though, is as pervasive as it is pretty. It's the flora equivalent of Public Enemy No. 1.

Nevertheless, you'll see "wanted" insects foraging on the "unwanted" plants along the Doran Beach trails. We've seen honey bee and butterflies foraging on the blossoms--including a pollen-packing bee seeking nectar--a short distance from the ice plant removal site.  And once we saw a Great Blue Heron snatch a vole from the ice plant growing along the Jetty Campground, Doran Beach.

Beauty and beasts are where you find them, whether they're flora or fauna or wanted or unwanted. Take a hike. Take a camera. Or, better yet, volunteer for an Invasive Plant Removal Day. The California Native Plant Society will thank you. 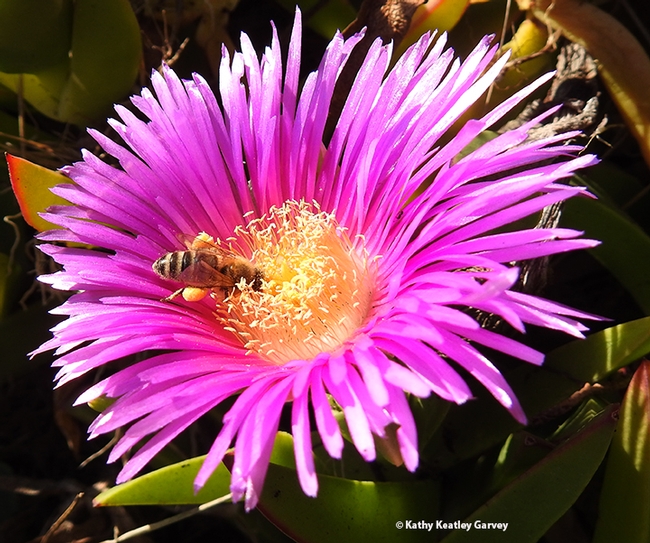 A honey bee foraging on ice plant along Doran Beach, Bodega Bay. Both the bee and the plant are non-native. (Photo by Kathy Keatley Garvey) 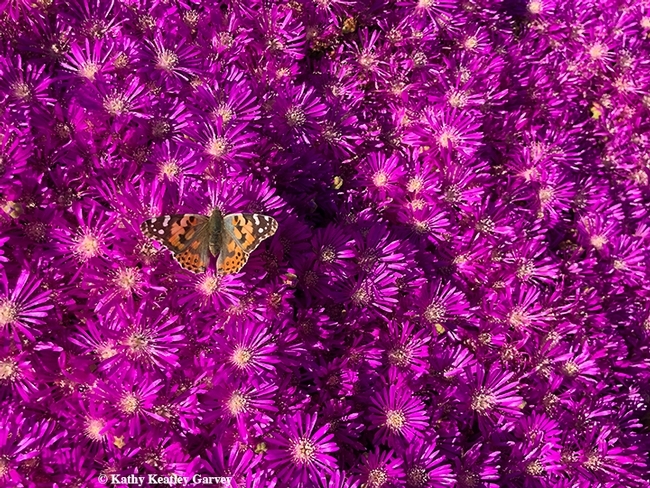 A painted lady butterfly, Vanessa cardui, takes a liking to this ground cover of ice plant, sold at many nurseries. This image was taken in West Vacaville. (Photo by Kathy Keatley Garvey) 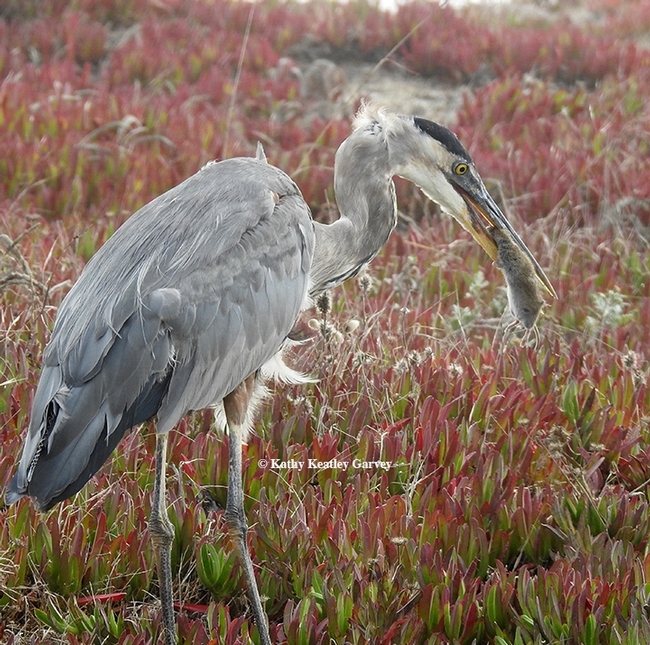 Close-up of a Painted Lady butterfly (Vanessa cardui) on an ice plant. (Photo by Kathy Keatley Garvey)
When you're sheltering in, you can still take the dog for a walk--and look for insects.

We spotted this Painted Lady butterfly (Vanessa cardui) sunning itself on a carpet of red-purple ice plant (Delosperma cooperi) in west Vacaville on March 20,  "the day after the first day of spring."

Each competed for photographic attention: the soothing autumn colors of the butterfly and the brilliance of the spring ice plant.

V. cardui is a migratory butterfly that travels across the deserts of Southern California, up into our area, and then to the Pacific Northwest. Last year, 2019, was a great migratory year for the Painted Ladies, as was 2005.

Butterfly guru Art Shapiro, UC Davis distinguished professor of evolution and ecology who has studied the Central California population of butterflies since 1972, writes on his butterfly website:

"This mass-migrant occurs in much of the Northern Hemisphere. Apparently the entire North American population winters near the US-Mexico border, breeding in the desert after the winter rains generate a crop of annual Malvaceous, Boraginaceous and Asteraceous hosts. The resulting butterflies migrate north. In good years (lots of desert rain) they may do so by billions, interfering with traffic and attracting the attention of the media. 2005 was one of the biggest Painted Lady years in history--perhaps the biggest, but how can we know?

"At Sacramento at the height of the migration butterflies were passing in one's field of vision at the rate of about 3 per second! 2006, by contrast, was a La Nina year with very little rain in the desert. The butterflies apparently gave up trying to breed there and flew north in February. They tried to breed but mostly were unsuccessful due to bad weather, resulting in only very sporadic individual sightings of their progeny in May. Northward-migrating Painted Ladies are provisioned with yellow fat and are reproductively immature. They do not stop to feed or have sex until they have burned up their reserves, carried over from the caterpillar stage. They fly in a straight line from SE to NW, like "bats out of Hell," and go over obstacles rather than trying to go around them. (On certain days there may be concerted local movements in the wrong direction. We do not understand these.) Painted Ladies tend to fly parallel to the Sierra Nevada, not across it. They enter the Central Valley through the Inyo-Kern lowland or by crossing the Transverse Ranges. They can apparently make it from Bishop to Davis in three days. In some years the migration is heavier in the Great Basin and on the East slope of the Sierra than farther west."

And as Shapiro will tell you, the Painted Lady is commonly mistaken for the iconic monarch (Danaus plexippus). Last year social media enthusiasts mistakenly acclaimed they'd seen "hundreds and hundreds" of monarchs passing by them.

BugGuide.net says V. cardui, which inhabits every continent except Antarctica and South America, is "commonly and easily raised especially in elementary school classrooms."

But life as we know it, has changed. California closed its classrooms in the throes of the coronavirus pandemic. "Social distancing" and "self-quarantining" are holding our vocabulary hostage.  Social butterflies? Not in this environment.  But sometimes, you happen upon a serene social scene--an autumn-colored butterfly tucked in a bed of spring ice plant--that takes your breath away. 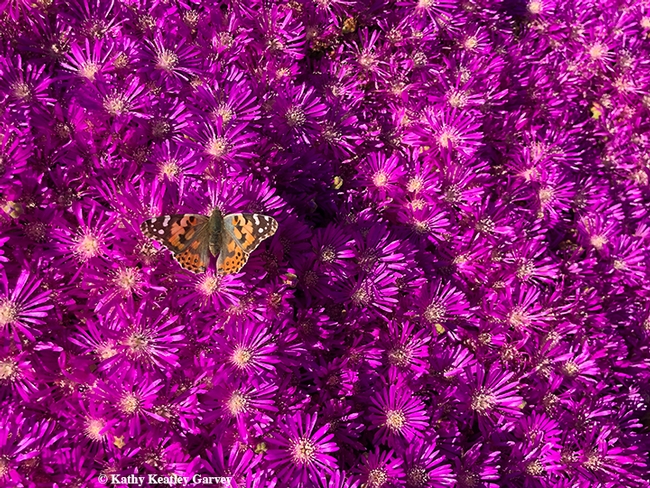