Although Extension apicuturist emeritus Eric Mussen of the UC Davis Department of Entomology and Nematology, retired in 2014 after 38 years of service, he continues his Extension work.

When a backyard beekeeper's hive in Concord turned aggressive (a swarm killed two dogs, attacked a mail carrier, and stung passsersby), journalists began singling out honey bee guru Eric Mussen and other UC Davis experts for interviews. Apparently, when a beekeeper moved his hive on Friday to make way for landscaping, the bees went on the defensive Friday and Saturday. Most of the bees have since been destroyed.

First of all, are they Africanized bees? DNA testing awaits.

“Their BEHAVIOR is very SUGGESTIVE that they could be Africanized,” Mussen told Bug Squad today.

“Until someone runs a definitive test on the on the bees actually involved in the Concord stinging incident, we may never know exactly what genotype the bees were,” Mussen points out, adding that "we have three ways to try to differentiate between Africanized honey bees (AHBs) and European honey bees (EHBs)."

“Yes, EHB colonies can behave in that nasty manner, but I think it is more likely that AHBs are involved,” Mussen says.  He recalled that twice in the 1980s, swarms of bees from South America accompanied shipments of raw sugar cane into the C&H sugar refinery in Crockett (Contra Costa County).

“We know the first one got away.  They think they got the second one, but could not find the queen in either case.    Since that time, there have been increasing complaints of "hot" bees from that area, south to Castro Valley (Alameda County).”

Mussen related  that “you don't have to have bees that test positive for AHB mitochondria to get extremely defensive behavior.  Studies conducted by Dr. Robert Page's lab workers in Mexico (see photo of an Africanized bee below that Page collected) demonstrated the gradual changes in behavior that accompanied increased proportions of AHB semen in A.I. EHB queens":

“So, if feral AHB colonies exist in the environment, we can have various amounts of ‘mismating' going on and its consequences around the area," Mussen points out,

“Another consideration is that mini-swarms of AHBs sometimes will alight on the outside of an EHB hive and park there for days.  The AHB workers slowly integrate themselves into the colony population.  Then, when conditions are right, the AHBs kill the EHB queen, the AHB workers and queen march in and take over (usurp the colony).”

“A third possibility is that some novice beekeeper was swayed by advertising for packaged bees from Texas.  Advertised as the most gentle stocks, there is no place where mating can be isolated enough to avoid AHB drones.”

Africanized bees are hybrids of a subspecies of bee from southern Africa that was exported to Brazil to improve breeding stock and honey production. Scientists say it escaped and spread throughout South America and into Central America.  It expanded into Mexico in 1985, in Texas in 1990, in Arizona in 1993, and in southern California in 1994. 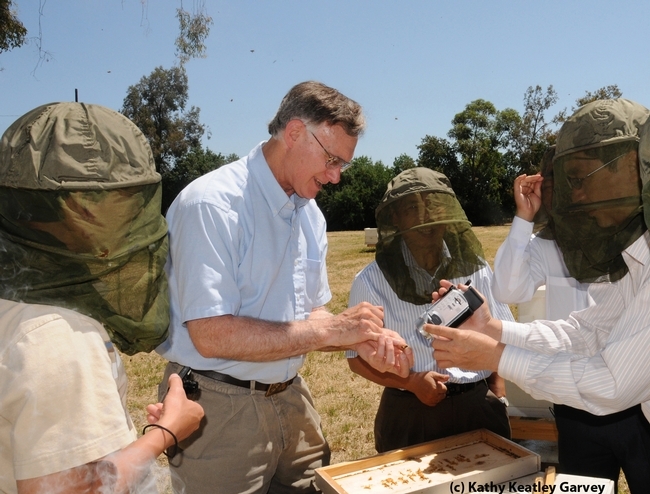 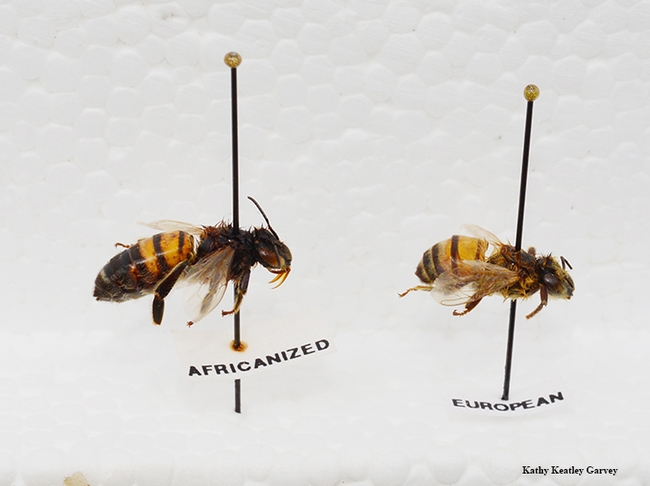