A backlit alfalfa butterfly. (Photo by Kathy Keatley Garvey)
If you've been driving near alfalfa fields in Yolo County and other Central California counties lately, you've probably noticed them.

Art Shapiro, UC Davis distinguished professor of evolution and ecology who has monitored butterflies in Central California for more than 40 years and posts information on his website, says he's been receiving lots of inquiries about the sulphur butterfly outbreak. Their caterpillars are major pests of alfalfa. The 'cats can consume an entire alfalfa leaf, including the midrib.

"Outbreaks like this used to be commonplace in late summer and fall in the Valley," Shapiro says, "but they disappeared during the drought: from 2012 through 2015 there were hardly any Colias, and I even contacted ranchers and farm advisers to find out if they were using any new pesticides or had altered alfalfa culture in some way that might account for the situation." The answer: No.

"The last big outbreak around here (Davis) was in October 2012," the professor noted. "Long-time residents can recall killing multitudes of them when driving near alfalfa fields in the Valley back in the 'old days.' Now it's happening again! Mass dispersal, like we're seeing now--when they blanket urban flower gardens and mowed lawns--typically occurs when the alfalfa is cut. Females are laying eggs on clover in lawns. One is, of course, tempted to say it must somehow be related to the weather--but we really don't know."

Encounters with cars and people and--yes, predators--continue. We just noticed an alfalfa butterfly trapped in a spider web in our yard.

There will be more. 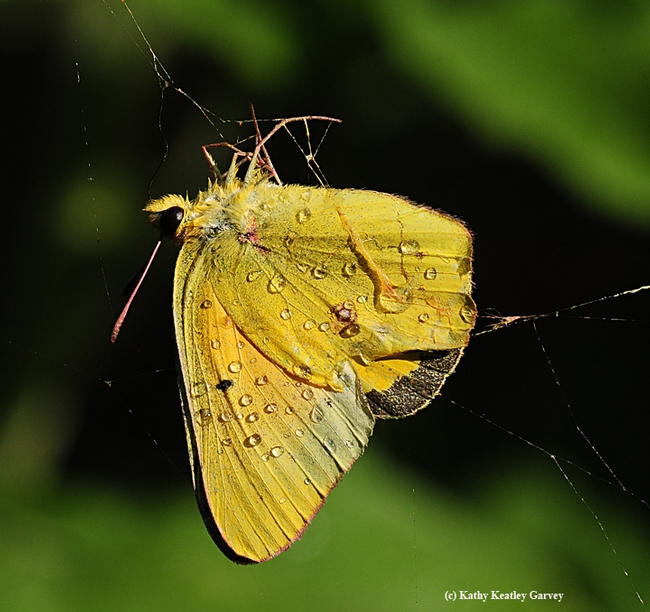 Alfalfa butterfly trapped in a spider web and doused by a sprinkler. (Photo by Kathy Keatley Garvey) 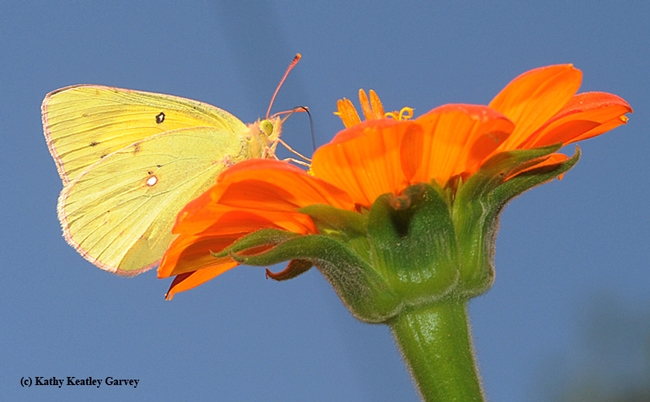