Entomologist Andrew Young, who researches syrphid flies, recently presented a seminar to the UC Davis Department of Entomology and Nematology. The seminar is online.
The wonderful world of insects...

Have you ever seen a syrphid, aka hover fly or flower fly, that resembles a bumble bee?

Volucella bombylans is a fascinating fly that engages in identify theft.  Of a bumble bee. It's a "wanna bee."

At first glance, it looks very much like a bumble bee, the Bombus melanopygus edwardsii, according to the late Robbin Thorp (1933-2019), distinguished emeritus professor of entomology at the University of California. Unlike a bumble bee, however, the fly has short stubby antennae and two wings instead of four. And, of course, it cannot sting.

Most of the species in the genus are inquilines, that is, they lay their eggs in bumble bee and wasp nests, and the larvae consume the host larvae.

We were fortunate to see a Volucella species recently in Vacaville. There's only one valid species of Volucella in North America, Volucella bombylans, according to Andrew Young, a postdoctoral fellow at the California Department of Food and Agriculture who addressed the UC Davis Department of Entomology and Nematology at a Feb. 5 seminar (pre coronavirus pandemic). "However, DNA evidence points to this being a species complex. So, I think it would be most accurate to call it Volucella bombylans complex right now."

If you have a chance, listen to Young's fascinating seminar, "The Natural History of Syrphidae: From Pollinators To Parasitoids." You watch it free here. Lynn Kimsey, director of the Bohart Museum of Entomology and UC Davis professor of entomology introduced him.

His abstract: "Syrphidae (Dlptera) is a species-rich family of true fly, with over 6200 described species worldwide," he says in his abstract. "Often known as flower flies or hover flies, syrphlds are likely the most significant group of pollinators outside of the bees--especially in Arctic climates. While research into their pollination-related behavior is still nascent, other aspects of flower fly biology have been relatively well-studied."

"Adults of many species are well-known for their impressive mimicry of stinging Hymenoptera, and known larvae display a degree of habitat diversity that is unusually broad for a single family of Diptera. Many larvae are predators on soft-bodied insects such as aphids, and therefore, show potential for crop-pest management, while others are aquatic filter-feeders that may have value in waste-management applications."

Young studied Syrphidae in the lab of Stephen Marshall, professor of entomology at the University of Guelph, Ontario, Canada. Marshall and Young are among the six co-authors of Field Guide to the Flower Flies of Northeastern North America" (Princeton University Press, 2019), a book described as "a groundbreaking guide to flower flies in North America." 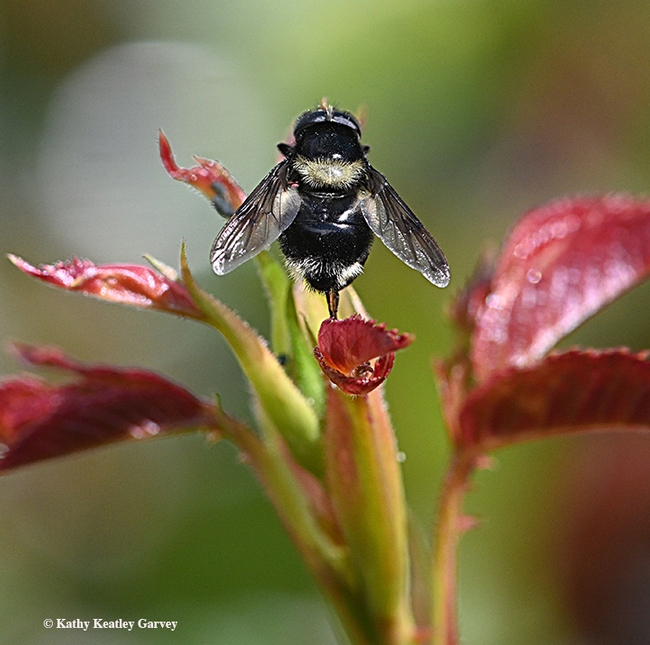 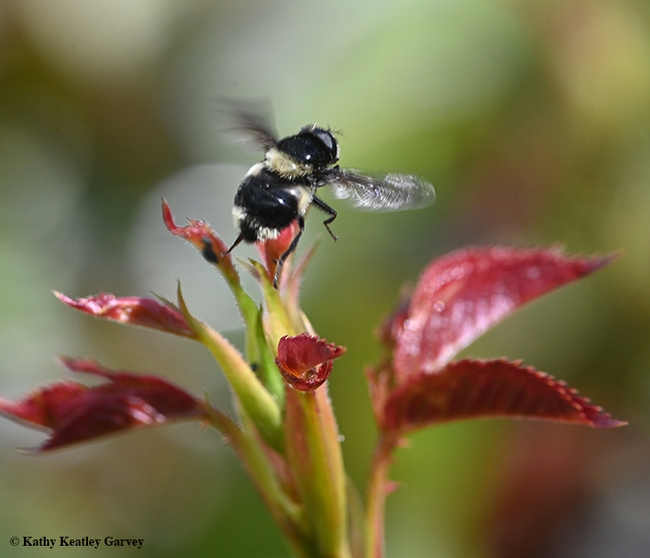 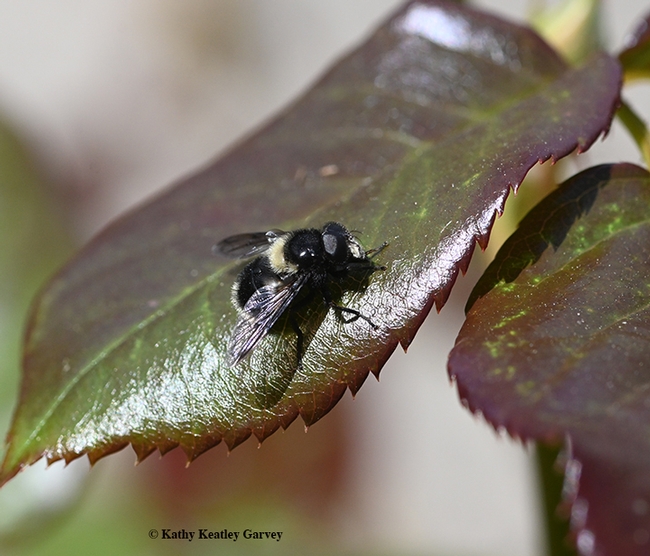 It's a fly; not a bee! Side view of the syrphid fly bumble bee mimic, Volucella bombylans complex. (Photo by Kathy Keatley Garvey) 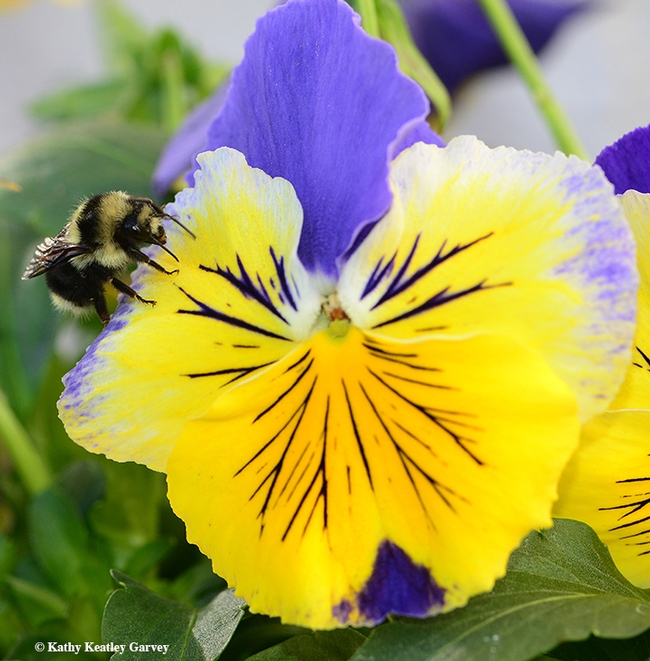 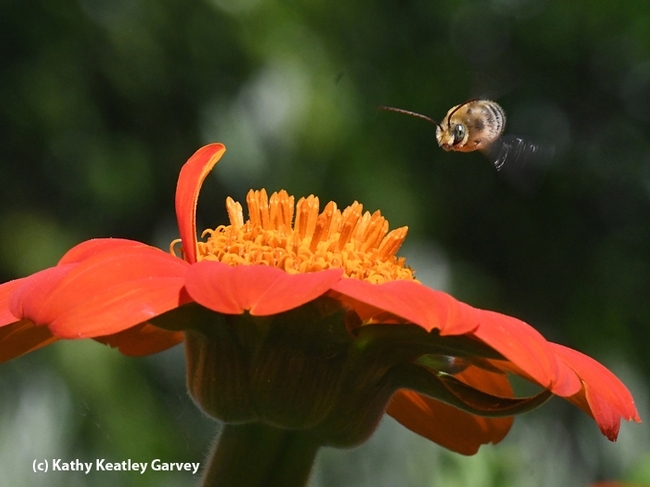 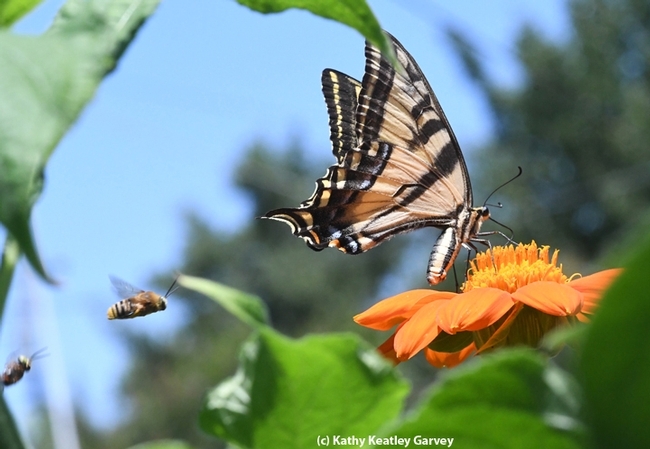 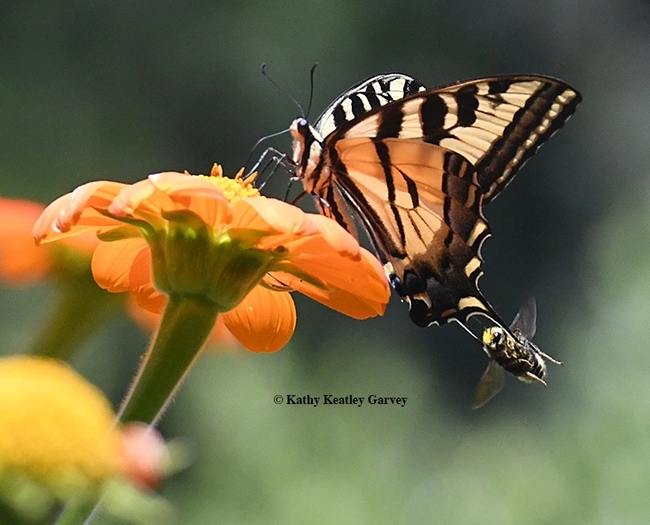 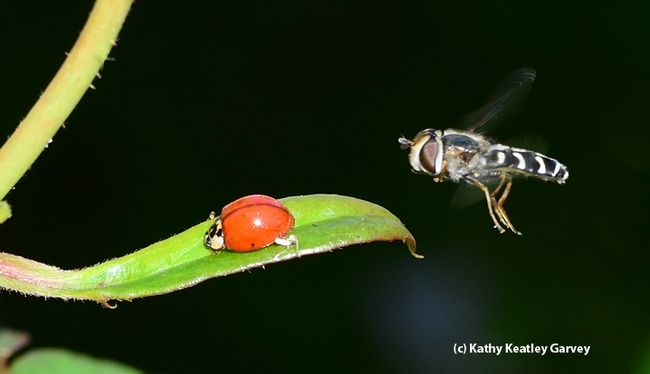 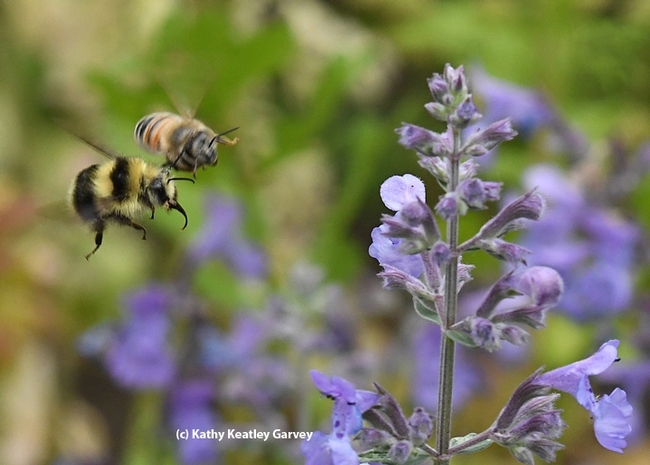 It's cool how honey bees and syrphid flies gravitate toward the Iceland Poppy.

It's a winter plant, and frankly, there isn't much to eat out there.

The name is a misnomer. It's not native to Iceland. It's from the cooler regions of Europe, Asia and North America, and the mountains of Central Asia. Botanists first described it in 1759.

Like all poppies, they're poisonous. In fact, scientists tell us that all parts of poppies are poisonous. That's because they contain toxic alkaloids. This one, P. nudicaule, contains a benzophenanthidine alkaloid, chelidonine.

Nevertheless, it's a unique, delightful plant. Each flower bursts forth from a hairy, leafless stem that curves like a question mark.  When a strong gust of wind further punctuates the plant, the petals drop to the ground. Spent. How fragile are the flowers!

Cultivars can be yellow, salmon, pink, orange, rose, cream and white, as well as tri-colored. The ones in our bee garden are Champagne Bubbles, 15-inch plants in yellow, orange, pink, scarlet, apricot and cream.

Today the honey bees and syrphid flies (aka hover flies or flower flies) jockeyed for position, almost engaging in critter combat in a swirl of autumn color, a veritable kaleidoscope of activity.

Matadors in the Champagne Bubbles... 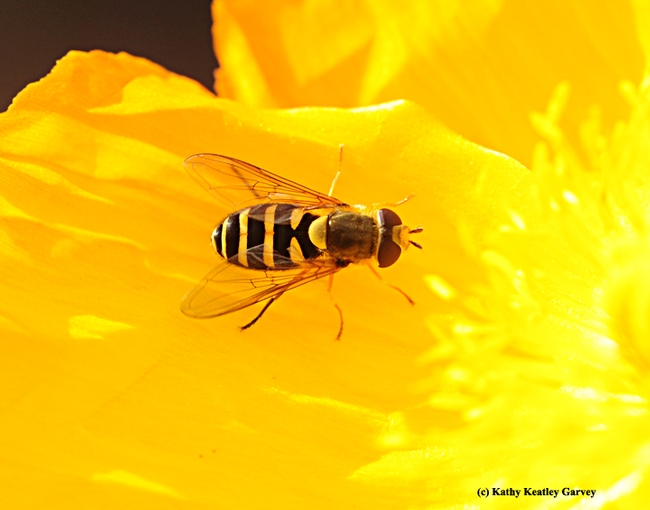 A syrphid fly, aka hover fly or flower fly, on an Iceland Poppy. (Photo by Kathy Keatley Garvey) 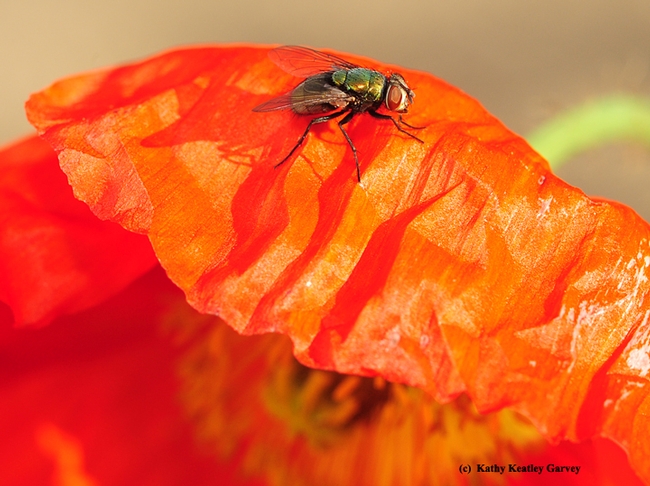 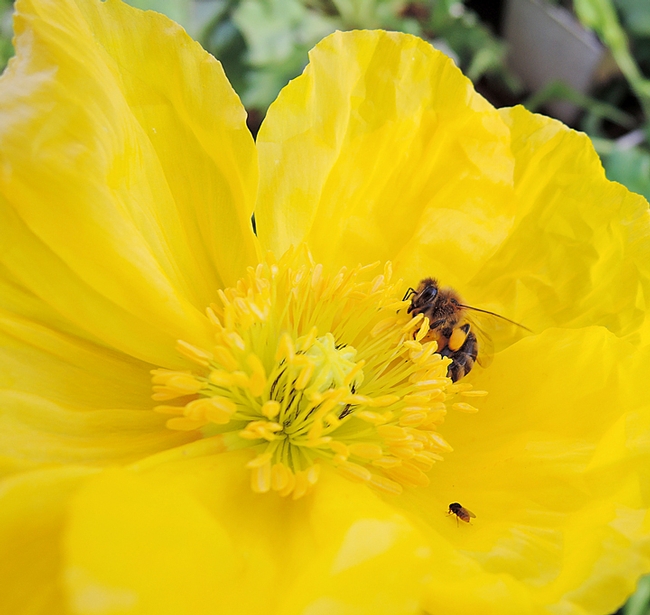 A honey bee gathering pollen. In the foreground: a freeloader fly. (Photo by Kathy Keatley Garvey) 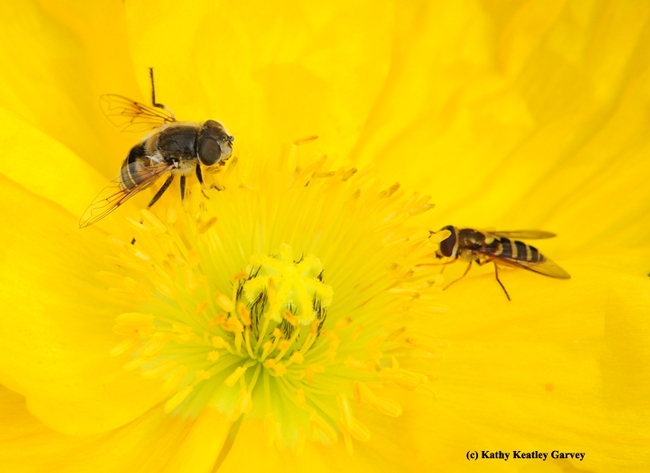