James R. Carey
From a trickle to a flood. But why?

Professor James R. Carey of the UC Davis Department of Entomology will tell you why.

He will discuss the invasion of tropical fruit flies in California at his seminar from 12:05 to 1 p.m., Wednesday, April 3 in Room 1022 of the Life Sciences Addition, corner of Hutchison and Kleiber Hall drives.

Carey's seminar, titled "From Trickle to Flood: The Large-Scale, Cryptic Invasion of California by Tropical Fruit Flies," is the first in the department's spring-quarter seminar series. It's open to all interested persons, and it will be recorded and available for later viewing on UCTV.

"Despite aggressive and costly efforts by government agencies to prevent their introduction, establishment and spread, California has experienced an inexorable march of tropical fruit flies (Tephritidae) into the state with three-fold more species detected and thousands more flies captured than in all other mainland U.S. states combined," Carey says.

"Since 1954 when the first fly was detected a total of 17 species in 4 genera and 11,386 individuals (adults/larvae) have been detected at over 3,348 locations in 330 cities. My colleagues and I conclude from spatial mapping analyses of historical capture patterns and modeling that, despite the approximately 250 emergency eradication projects that have been directed against these pests by state and federal agencies, a minimum of 5 and as many as 9 or more tephritids are established and widespread. This list includes three of the most economically-important species in the world—the Mediterranean, Mexican and oriental fruit flies."

In his seminar, Carey will "outline and discuss the evidence for our conclusions with particular attention to the incremental, chronic, and insidious nature of the invasion involving ultra-small, barely-detectable populations. I will consider the more general implications of our results in scientific, economic, and operational contexts of invasion biology, as well as ethical issues concerned with the purposeful obfuscation of historical fruit fly detection data at individual, administrative and institutional levels."

Carey, former vice chair of the Department of Entomology, focuses his research on insect demography, mortality dynamics, and insect invasion biology. He received his bachelor and master of science degrees from Iowa State University (1973; 1975) and his doctorate in entomology from UC Berkeley (1980).

Carey is a noted authority on the invasion of the tropical fruit flies. He served on the California Department of Food and Agriculture's Medfly Scientific Advisory Panel from 1987-1994, testified to the California Legislature "Committee of the Whole" in 1990 on the Medfly Crisis in California, and authored the paper "Establishment of the Mediterranean Fruit Fly in California" (1992, Science 258, 457). 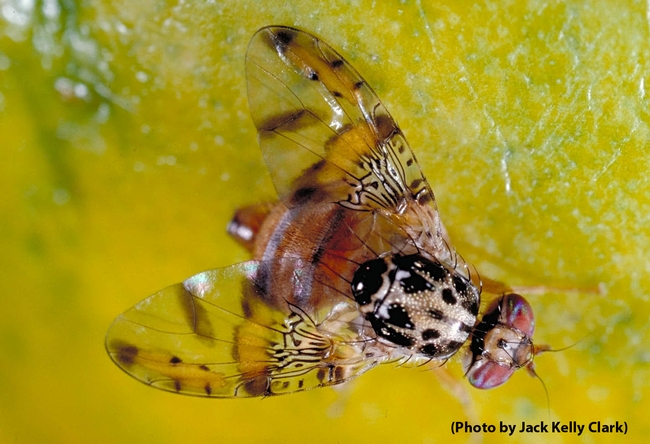