A male monarch nectaring in Vacaville, Calif. Citizen scientists are asked to report all sightings of Western monarchs from Feb. 14 to April 22 to the Western Monarch Mystery Challenge. (Photo by Kathy Keatley Garvey)
"Why Are the Monarch Butterflies Declining in the West?"

Professor Elizabeth Crone of Tufts University who researches monarchs (as well as bumble bees), drew a standing-room only crowd when she presented a UC Davis Department of Entomology and Nematology seminar on the decline of Western monarchs.

UC Davis professor Neal Williams, a pollination ecologist who researches native bees, praised her "fearless perspective in the use of statistics; I value her insights." Williams has collaborated with her "off and on" for 20 years.

Crone, who just finished a six-month research sabbatical at UC Davis, says her work centers on population ecology, especially of plants and insects, and plant-animal interactions. "Specifically, I am interested in how environmental changes translate to changes in population dynamics: For example, is there a simple, linear matching of changes in resources to abundance of consumers, or do interactions among individuals and species moderate these responses? Much of my research also involves developing novel quantitative approaches to predict long-term dynamics from small scale observations and experiments. Current projects include studies of butterflies, bees, perennial wildflowers, sugar maples, and acorn-granivore interactions."

In her UC Davis seminar, Crone pointed out that the population of Western monarchs, which overwinter along the California coast, dropped from an estimated 4.5 million in the 1980s to less than 30,000 in the winter of 2019.

After the monarchs leave their overwintering sites in February and head inland, "we  don't really know where they are in spring," Crone lamented. "There's not a lot of records of where monarchs are in spring. That's why we're trying to draw on citizen scientists to help us find monarch butterflies in the spring."

Crone is a member of a team of researchers, led by Cheryl Schultz, biology professor at Washington State University, who are recruiting the public, aka citizen scientists, to report sightings of monarchs from Feb. 14 through April 22, Earth Day. The project is called the Western Monarch Mystery Challenge.

To participate in the Western Monarch Mystery Challenge:

Crone told the UC Davis crowd that "we need to understand the basic biology throughout the life cycle....So from a conservation perspective, we know that we need to protect and restore overwintering sites on the coast of California...It also helps to improve summer habitat both for its own sake and maybe to mitigate losses. It other places, this includes planting your own pollinator gardens. It includes minimizing ;pesticide use society-wide."

It's not just agriculturists who use pesticides, said Crone, noting that "California tracks pesticide use." She showed a database that indicated 25 percent of the state's total pesticide use is for non-agricultural uses. This includes pesticide applications in parks, roadsides and golf courses, she said. "That doesn't include people who go to Lowe's or Home Depot and pick up a can of insecticide to prevent the aphids from eating their roses. And read the label and it says, 'Why don't you just spray every week so you never see aphids at all?' So we should be very aware that pesticides are everywhere in our landscape, and a lot of us are using them without thinking about them. And anything we can do to minimize pesticides has got to  be good for nearly all insects."

From an applied ecology perspective, Crone considers her biggest accomplishment "helping the Fender's blue butterfly move from being listed as endangered to nearly ready for down-listing. From a basic ecology perspective, I figured out the ecological interpretation of variance terms in mixed models as estimates of spatial heterogeneity and environmental stochasticity, and worked out one of the best examples of how mast-seeding species are synchronized by their pollinators."

"It's an exciting time to be an ecologist," Crone said. "Because the puzzle of linking natural history and theoretical ecology to guide conservation is really intellectually interesting, even from an academic perspective. And it also makes me optimistic."

"We did it with Fender's blue butterfly," she told the crowd. "Maybe we can help prevent other insect populations from being at risk of extinction." 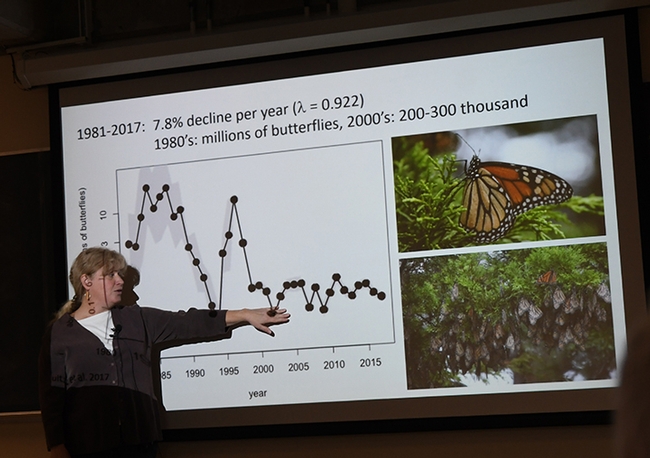 Professor Elizabeth Crone delivering a seminar on Western monarchs to the UC Davis Department of Entomology and Nematology. (Photo by Kathy Keatley Garvey) 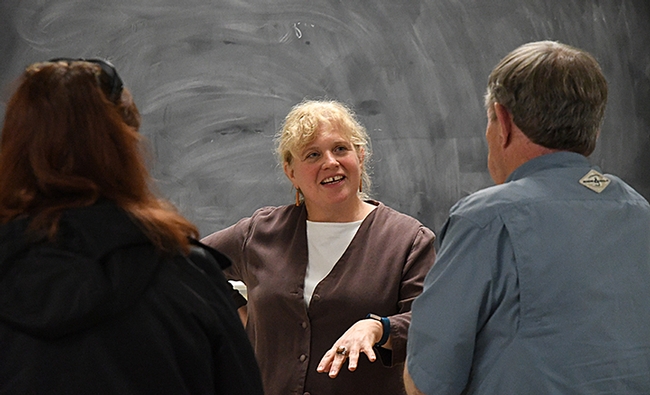 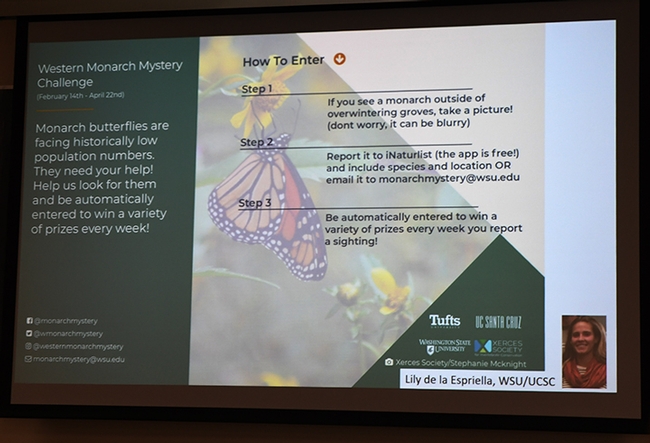