They're up and at it long before the honey bees.

Before dawn breaks, you'll see the tiny bees gathering nectar and pollen in squash, pumpkins and other cucurbits.

They're squash bees (Peponapis pruinosa), sometimes called the plush bee. Unlike honey bees (which European colonists brought here in the 1600s), these are native pollinators.  And unlike honey bees, these are solitary bees that nest underground. You'll find them from Quebec southward into Mexico.

Entomologists say they do a better job pollinating squash than the honey bees.

We'll take their word for it. Dozens of blossoms grace our sole squash plant, a yellow straightneck summer squash.

We bought the plant for a dollar, planted it in April, and already it has produced a dozen squash, thanks primarily to the little squash bees.  Later in the morning, honey bees and carpenter bees gather where the squash bees have been.

It's our "yellow blossom special." 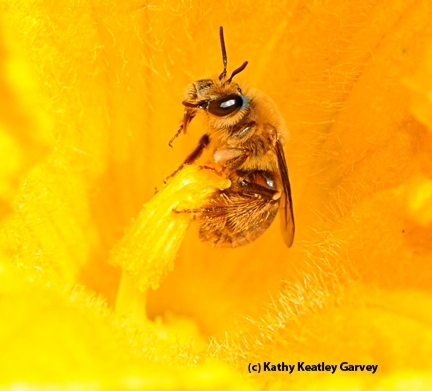