Harvesting Castings from your Worm Bin

After about three to six months of being fed, compost worms will have created enough compost to harvest. In this two bin system, when your bin is getting full you are ready to add the next layer of bin, nesting it on top.   This works because you will stop feeding in the lower bin, and add food to the top bin.   As a result, many worms migrate to the top bin through the air holes in the bottom of that bin.

To Start The Second Bin:

Now that you have harvested the castings you have a nutrient rich soil amendment to feed to your plants. By adding this compost to your garden or to house plants you will help your plants thrive. These castings will help condition your soil and also add nutrients and beneficial microorganisms.  When first harvested, the compost is damp, lumpy and clay like. This can be added to the garden right away or you can let it dry out to store. When dry it becomes a fine grained product that you can sprinkle at the base of plants. Here are some guidelines to keep in mind:

I hope you enjoy the process of creating this healthy, rich soil amendment from scraps.      Using compost worms is very easy, the process a wonderful way to dispose of garbage, and a great way to create compost, it is a beautiful dark soil conditioner that will help feed and nurture your plants. Bin set up.
To house compost worms, a container holding approximately 10 gallons works well. The photo shows one of my set ups for worms, directions for this two bin system is from
Washington State University Whatcom County Extension ”Cheap and Easy Worm Bin.” See references for the website. I spent sixteen dollars on these two bins. They are super easy to create by drilling holes for air in the two bins and one of the lids. Many other containers will work, just keep in mind that the worms need air, and darkness; don't pick clear containers.

Compost worms live in leaf litter, as opposed to earthworms that burrow in the soil.  There are many suppliers of compost worms (see references) and to start, about 1000 worms, roughly a pound will work fine in this size bin. The worms will reproduce to the capacity of the bin. If you've tried the bait shops, likely you found only night crawlers for sale. Night crawlers cannot survive on vegetable waste and will not thrive in your bin. To create good conditions for the worms, shredded newspaper, or other paper will work as the bedding for compost worms. Follow these steps to set up your bin:

 Rinse bin, to ensure the bin is clean.
 Tear newspaper into strips about 1” wide. Avoid colored print, which may have ink that is toxic to the worms.
 Dampen newspaper strips by placing in a large plastic bag and adding water until the bedding feels like a wrung out damp sponge. If the strips get too wet, add more paper.
 Add the paper strips to the bin and fluff up. Do not pack down; you want to provide air for the worms to live in the bedding. Add enough fluffed up paper to fill the bin up to 3/4 full.
 Sprinkle about 2 cups of soil into the bin. Worms use the soil grit to grind up their food, and the soil adds useful micro organisms.
 Add compost worms: put in under the paper shreds.
 Bury food scraps under the bedding. See food list. Smaller pieces are more readily eaten by the worms.
 Start slow, generally worms can consume about 3 times their weight, per week. If you start with a pound of worms, then you can feed about 3 pounds of food scraps per week.
 Cover the bin with the lid that has air holes.
 The other lid can be used under the bin to catch any drips.
 Place bin away from windows and heaters. Temperatures around 55 to 70 degrees work well. If the temperature is ok for you, it's ok for the compost worms. If outside, secure from animals digging in the bin.

 Be careful of too much citrus, no more than 1/5 th of feed.
 Onions, garlic, both considered too pungent for compost worms.
 Meats, fish.
 Dairy foods.

Compost worms also consume the paper bedding. After the initial set up, keep a 1” layer of bedding on top, adding more as needed.

If the contents seem too wet, add more dry paper.

If the contents seem too dry, mist with water.

If the bin begins to have a bad odor, you may be adding too much food. Fluff up again, and stop feeding for a while to let the worms catch up on their eating.

Check each week to see how well the worms are going through the amount of food you are giving and adjust accordingly.

Worm composting is a wonderful environmentally friendly way to dispose of garbage; it is especially suited to processing kitchen scraps. Worm compost is rich in nutrients and is an excellent soil conditioner. Offices and schools may also use worm bins to reduce paper waste and turn garbage into garden gold.

For further information, check the next article on Harvesting Worm Compost.

To get an idea of worm suppliers check: 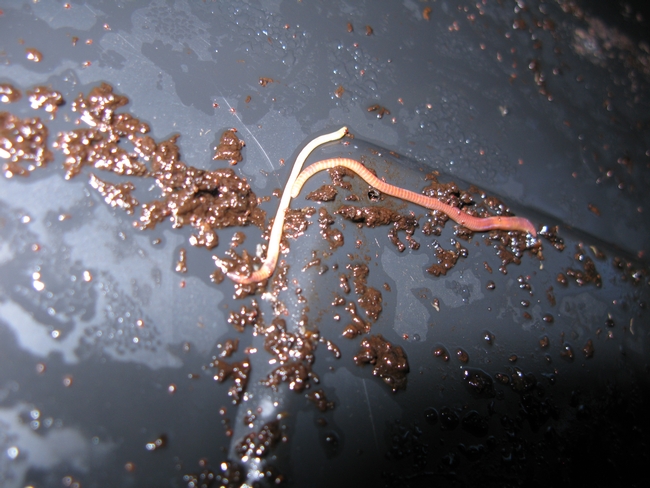 My yard is covered in snow, but I am still composting here in Mammoth Lakes. I am composting my kitchen scraps indoors - with the help of compost worms. Coffee grounds, tea leaves, veggie scraps all go in the compost bins. Vermicompost is the official term for composting with worms. Vermicomposting is sometimes confused with vermiculture which is the process of raising worms.

The most commonly used worms for composting are Eisenia fetida, known as "Red Wigglers" or "Red Worms" that you can find in sporting goods stores to be used as fishing bait. You can buy worms at sporting goods stores, online, or get some from a friend who has a vermicompost setup already. It's not the most lovely of names for such a helpful creature, but do not fear, these are very skinny little worms! I once saw an adult relative run away from an earthworm on the pavement; that really made me laugh but it also pointed out to me that some people think worms are yucky, or even scary. Compost worms, however, are really useful.  Communities have reduced waste going to their landfills through composting efforts incorporating vermicomposting. In addition to reducing waste, the product of worm composting, called castings, is a nutrient rich fertilizer and a great soil conditioner.   You can add it to your outdoor plantings and to houseplants. It is also easy to create “worm tea” as a liquid fertilizer. Even if you use an outdoor compost pile, vermicomposting is a great option for processing kitchen scraps.

Housing for worms is surprisingly easy to make and also to maintain. My smallest worm bin was a gift over 25 years ago; it takes up about a square foot of space.   I have two other bins, the Taj Mahal of worm bins with multiple trays that I won as a door prize (thank you Master Gardeners), and another I put together as a demonstration project.   The demonstration bins I made and still use are from plans for a “Cheap and Easy Worm Bin” available on the Whatcom County Washington State University Extension website http://whatcom.wsu.edu/ag/compost/Easywormbin.htm. This is a very simple homemade worm bin using plastic totes. Be sure to get opaque totes as compost worms are sensitive to light. The Whatcom County Extension website also has simple instructions on starting your worm bin and harvesting castings.

Any search on the internet will bring up many enthusiastic articles related to vermicompost, but please don't get the idea it is complicated or difficult.  You can even leave the bin and go off on a three week trip without your worms missing you. They just continue to work over what material is in the bin.

The whole process is surprisingly easy and free. Should I have mentioned free earlier?  It's really hard to beat free! Once you have purchased your bin and starter worms, the rest is free and the resulting product is a high quality soil amendment that also reduces waste to our local landfill, your plants will love you for it.

In my next articles on vermicompost, I will cover the particulars of maintaining a compost worm bin, using castings and creating worm tea.

Further information including a list of suppliers can be found at www.calrecycle.ca.gov/Organics/worms/WormFact.htm

Another good resource is: http://www.bae.ncsu.edu/topic/vermicomposting/

For information on our local soils go to the section entitled “Eastern Sierra Gardening Info” in the UCCE Master Gardeners of Inyo and Mono counties' homepage at http://ucanr.edu/sites/mginyomono.