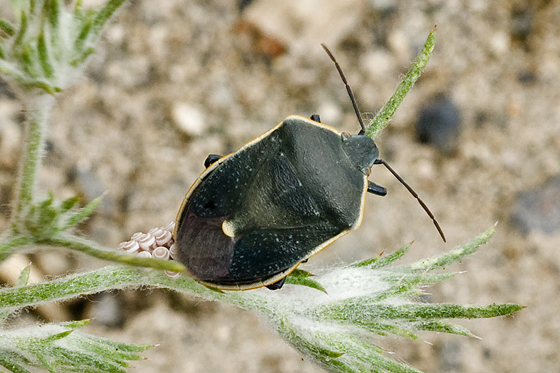 I know you'll be glad to hear that there is a new garden pest in the Eastern Sierra. Well, it's native and so not technically new, but as far as I know, gardeners haven't had to deal with it in recent memory.

This insect is a stink bug with the gnarly name of Chlorochroa kanei. Don't try to say it quickly! As far as I know there is no common name for it. Characteristically it has a single dot on its back and a light border around its body. The color, at least this year, has been black, but dark green and brown variants are known to exist.

It normally feeds on the Great Basin plants in the desert, but this year it has shown up in gardens. We have seen it so far on English peas, artichokes and possibly potatoes. I tried to find a preferred host list for this pest and there wasn't really information. Other species of Chlorochroa do have preferred hosts figured out, but not this one.

If you encounter this pest, please let us know in the comments, and tell us which plants you found it on so we can better know what to look for.

Probably the best control in the garden will be to physically remove them and their eggs. UC IPM has some general information about stink bugs online here, but nothing on this particular pest. Information for those other species will apply here as well.

Chances are we may not see it again in the garden, but you never know!