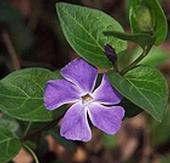 VincaT
Periwinkle or Vinca major is a ground cover that has been popularly planted in many areas of California.  It has also become a major pest in many coastal and valley riparian areas where it has naturalized and now out competes many of the native flora.  It is also a major pest in my garden and I am looking for great alternatives to take its place.  The good news is that there is a web link on the California Gardening website to a group called PlantRight.  (http://plantright.org)  They have extensive lists of non-invasive ornamental plant alternatives for every climate zone in California.


For example, some of the suggested plants that could be used to replace Vinca include:...

I live along an historic boulevard of beautiful Canary Island Date Palms,  Phoenix canarensis.  They are really majestic but they do drop a lot of fronds during much of the year.  Anytime there is a breeze, one can expect to see the large fronds or flower clusters littering the ground around the base of the trees and  the street.  The dropping fronds are not really a huge issue in our area because the road is quite rural, and infrequently traveled.   However, there are many plantings that are considered quite hazardous because there are a lot of cars and pedestrians under the trees.  To reduce the possibility of injury, there are those who will drastically prune palms just to prevent the fronds from dropping later.  I...

Eutypa1
Apricots and cherries can have a fairly short lifespan in many climate zones in California due to a disease called Eutypa.  This disease is able to invade through pruning wounds especially during the wet winter months.  This disease causes limbs or twigs to wilt and die suddenly in late spring or summer with the leaves still attached.
The bark may appear dark with an amber colored gumming on the branches.

To combate that the disease and reduce the potential for Eutypa to infect trees, you should begin pruning your apricot and cherry trees during the later part of summer and early fall at least 4-6 weeks prior to rainfall.  However, realize that you may be opening your trees to sunburn with summer pruning so be...
Read More

spotted Spurge
Spotted spurge is one of those weeds that seem to defy our best efforts to control it.  It is a low growing plant that develops into a dense mat that can overgrow turf and compete with ornamental ground covers and annuals.  It can be characterized by its dark green tiny leaves, which often have a red spot about mid way down the center leaf vein.  The stem, when broken, exudes a milky latex juice. The plant has a central taproot system that is capable of extending more than 2 feet into the soil. The tiny pinkish flowers abundantly produce a three-celled seed capsule that is 1/16-inch long or less very early in its lifecycle.  Spurge can be very difficult to control once it becomes established so prevention is key.  However, once it invades...
Read More