For over a week, we've witnessed the pain, helplessness, grief, and anger that comes from the ongoing discrimination, bigotry and violence of systemic racism and environmental injustice. From the disproportionate impact of COVID-19, to the racist behavior against a black birder in Central Park, to the killing of George Floyd, these are just recent manifestations of the ongoing trauma that is a reality for people of color. While it is not within the power of a single organization to eliminate racism, it is the moral obligation of every organization to recognize and acknowledge it: Black Lives Matter.

The mission of the California Naturalist Program is to foster a diverse community of naturalists and promote stewardship of California's natural resources through education and service. Fulfilling that mission involves eliminating barriers to participation, expanding the relevance of our program content to address environmental justice, building strategic community partnerships, making the healing powers of nature safe and welcoming for everyone, and even acknowledging the colonial roots of the field of natural history itself. But, we know even that is not enough. To be completely true to our mission, our principles of community, and our anti-discrimination policy, we must also show solidarity when the situation demands it. Solidarity eliminates the ambiguity of silence and amplifies the voices of those straining to say: “I can't breathe.”

Together with our naturalists, our community partners around the state, the leadership of UC ANR, the entire UC system, we stand with those communities seeking peaceful change, the fair administration of justice, and a safe and inclusive environment. As UC ANR Vice President, Glenda Humiston clearly stated: “To those within our community who have suffered from such bigotry, we stand with you and with everyone who stands against racism, racial profiling, police brutality and injustice.” 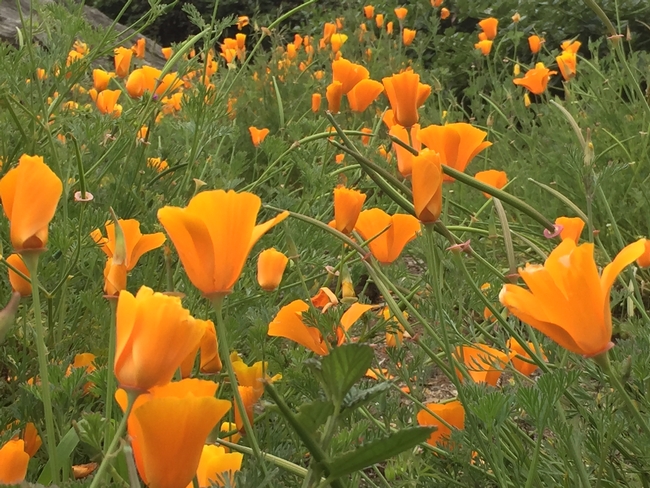 Unprecedented is an increasingly common adjective these days. It should be no surprise that unprecedented times often inspire unprecedented responses. Volunteer service by California Naturalists is no exception. For example, the most recently certified class of 12 California Naturalists at Sonoma Ecology Center completed capstone service learning projects ranging from creating wildflower guides and making native plant nursery labels, to facilitating new nature-themed webinars and participating in on-line community and citizen science projects. All this, accomplished with stringent SIP orders and a complete shutdown of local parks and open spaces.

Traditionally, California Naturalist volunteer service falls into four categories:interpretation/education; conservation/restoration, community and citizen science, and program support. With the rollout of the UC Climate Stewards course this fall, we have added two new categories of service to the Volunteer Management System: 1) Climate and Environmental Justice, and 2) Community Resilience and Adaptation. These categories are available for use by California Naturalists logging volunteer hours now and to Climate Stewards in the future.

To support the efforts of our partners and California Naturalists, we encourage naturalists with the capacity to continue volunteering to explore new forms of volunteer service that don't involve direct contact with others. This may include at home, online, or over-the-phone activities. In addition, the program will recognize un-paid service with a wider community lens that exemplifies the new Community Resilience and Adaptation category. Some examples include helping to create online natural history lessons or virtual experiences, donating blood, supporting a community hotline, supporting contact tracing, sewing face masks, or calling to check in on neighbors and helping them run essential errands. While any form of volunteer service involves some level of risk, when a simple conversation becomes a potential public health threat we are in uncharted territory. Organizations that engage California Naturalists as volunteers are following local guidance and making adjustments to ensure volunteer safety. We support those efforts. In the end, each individual California Naturalist must weigh their abilities, personal risks, and the benefits of volunteer service.

The California Naturalist program does not require volunteer service to maintain certification, but it does incentivize service with an annual service pin (Those that logged 40+ hours last year haven't missed out- 2019 Pins haven't gone out yet due to COVID-related delays on the manufacturing end). These new categories of service and the increased flexibility to recognize safer options to contribute to community resilience reflect changing priorities, the needs of California Naturalists, and the challenges facing the communities we live in and serve.

Staying meaningfully and safely engaged can provide benefits beyond the community and the environment. As many of us seek to develop coping mechanisms to reduce stress, anxiety, and build a sense of purpose, volunteering can help buffer these challenges and connect us more deeply.

With gratitude for all you do, be well and do good. California Naturalists have a class at the LA River.

The UC California Naturalist program is expanding! As we continue to grow, we seek meaningful and intentional partnerships with diverse organizations that serve as informal and formal science centers and as gathering spaces for their communities. These organizations not only provide CalNat courses to their communities but a long list of other services. Continue reading to learn about the newest CalNat partners in the Southern California area. Please help us spread the word about these new program partners as we welcome them to the CalNat family!

“Community Nature Connection recognizes that historically undeserved communities face barriers to accessing nature and public lands. For over 25 years our programs have removed these barriers, connecting tens of thousands to their nearby natural surroundings. These programs drive forward our mission to increase access to the outdoors for diverse communities through innovative programming and in partnership with the communities we serve.”

Bolsa Chica Conservancy – The Bolsa Chica Conservancy will be marked as our first program partner in Orange County. This iconic and well known wetland is a magnet for migratory birds and community scientists alike. It is flanked by 2.5 miles of the Pacific Coast Highway and shares PCH as a border with a very popular state beach. Focus: Wetland & marine ecology, migratory birds, invasive organisms.

“Established in 1990 by a coalition of government, community, business and environmental leaders, the Bolsa Chica Conservancy, a private, not-for-profit organization, provides services that inspire and connect all generations through community involvement and leadership in hands-on restoration and education in wetland science, watersheds, coastal ecology and environmental sustainability”

L.A. Arboretum – The Los Angeles County Arboretum and Botanic Garden is a unique 127-acre botanical garden and historical site located in what was the heart of the historic Rancho Santa Anita in the city of Arcadia. This site serves community members and as a popular fieldtrip destination for schools throughout the extended LA area. Focus: Teacher education, urban landscapes and ecology.

“Our mission is to cultivate our natural, horticultural and historic resources for learning, enjoyment and inspiration. We strive to reflect Southern California's distinct climate, community and openness to new ideas.  The Los Angeles County Arboretum and Botanic Garden is a unique 127-acre botanical garden and historical site that includes Native American, Rancho Period, and late 19th century treasures. In addition to concerts and tours, we offer activities and events that cater to every audience.” The UC Climate Stewards course addresses the growing demand for training on the skills needed to effectively communicate and advance community and ecosystem resilience. Instructors combine in-person, online, and field experiences to achieve this goal. The course's five units are designed to help participants connect with each other through their personal experiences with climate change; communicate with a wide range of audiences and leverage their community connections; understand the science behind climate and earth systems along with observed and expected climate changes; develop the skills to engage in community and ecosystem resilience efforts; and demonstrate their own ability through a service oriented capstone project. A focus on the importance of social and emotional support for climate educators and learners, using systems thinking to address root causes, emphasizing community-level solutions, and the role of community and citizen science help set the course apart from other climate change education efforts.

Building on the success of the UC California Naturalist network, UC Climate Stewards will establish and support inclusive communities of practice that develop and share knowledge, as well as build statewide support and capacity to advance local and state climate goals. Our vision is for a California with engaged communities and functioning ecosystems that are resilient in a changing climate. With how much we all have lost in the past few months, we really needed a win. And the win came from a somewhat unexpected place: nature. Our naturalists have long had a strong connection to their local flora and fauna, but recently more people have sought solace in the outdoors. These certified naturalists teamed up with fellow nature enthusiasts in their neighborhoods this year in the annual City Nature Challenge. With access to open space more limited in cities across the globe, the 5th event became a City Nature Celebration this year. Instead of a friendly competition, the event turned into a collaborative effort to collect observations of nature through photos and sound to upload to the iNaturalist app. Despite a global pandemic, thousands more people participated compared to last year, and more species were documented: a huge win for science, nature, and people.

The City Nature Challenge encourages people to explore their urban nature, connect with local advocacy organizations and other iNaturalist users, and learn how to participate in community biodiversity science. From its first competition between the San Francisco Bay Area and Los Angeles County, it quickly has grown to include about 250 cities around the world. The search for nature over a period of 4 days each April inspires over 40,000 people to tromp through snow, find wildflowers, chase butterflies of all sizes, and tune in to the nature in their backyards thousands of miles apart.

The impact of our naturalists is even greater than just the few who are in the top 20 observers for their city. Even for naturalists who contributed one observation or identification this year, every documentation of our state's unique biodiversity is important. Thank you for each one of you who took a moment to contribute this year, especially given the difficulties we each face. We can't wait to be all together for next year!