EicOsis LLC, a company founded by UC Davis distinguished professor Bruce Hammock to develop a non-opiate drug to relieve inflammatory pain in companion animals and target chronic neuropathic pain in humans and horses, can now add “Sacramento Region Innovator of the Year” to its list of accomplishments.

The ceremony, honoring the winners of the eight categories, took place Nov. 7 in the Crest Theatre, Sacramento. Judges scored the finalists on novelty, market need, economic or social impact and disruption. Bruce Hammock, founder and CEO of EicOsis and Cindy McReynolds, senior program manager, with the trophy. (Photo by Kathy Keatley Garvey)
EicOsis, based in Davis, is developing a new class of oral non-narcotic analgesics based on inhibition of the soluble epoxide hydrolase (sEH) enzyme. The sEH inhibitors have already shown to be effective for inflammatory and neuropathic pain in the rodents, horses, dogs and cats, with no apparent adverse or addictive reactions. 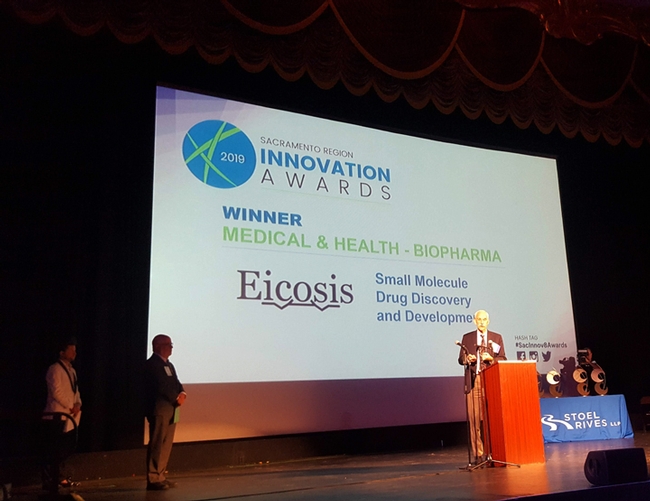