Niño served as a research technician in the Penn State lab of Christina Grozinger from 2009 to 2014.

Wrote Cherie Winner, associate director of research communications at Penn State and the coordinator of the contest:

"We have a winner!

"The winner of our first At Large photo contest is Bernardo Niño, whose close-up shot of honey bees at their hive is so vivid that it makes us hear the buzzing and taste the honey.  Bernardo's photo appears in the spring issue of Research|Penn State, which will arrive on campus in mid-April. In addition to publication of his photo in Research|Penn State, Bernardo will receive a high-quality print of the At Large spread, suitable for framing."

The magazine explored the "the challenges facing bees today, including deadly mite infestations and viral infections and loss of natural food sources due to habitat loss. Grozinger's lab is investigating these threats and how we can bolster bees' natural defense systems to keep them happy, healthy, and on the job as pollinators of some of our most valuable crops."

Bernardo is married to Extension apiculturist Elina Niño, formerly of the Grozinger lab and now with the UC Davis Department of Entomology and Nematology. See Facebook page for the E. L. Niño lab. 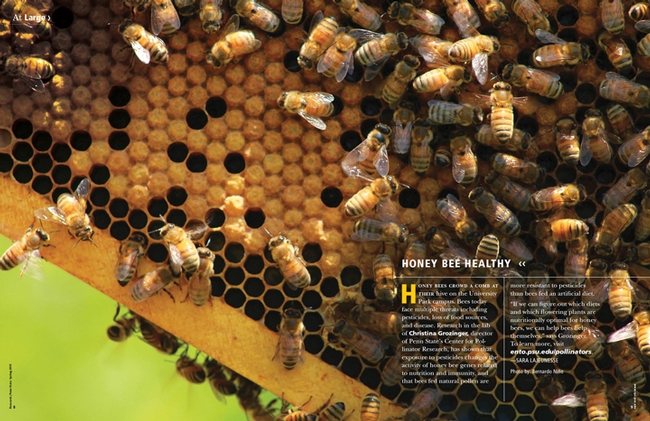