Ecologist Louie Yang, associate professor of entomology, UC Davis Department of Entomology and Nematology, is the recipient of a major academic advising award.

NACADA, also known as the Global Community for Academic Advising, singled him out as the winner of the Faculty Advisor Award of Excellence in Pacific Region 9, comprised of California, Nevada and Hawaii.

Yang will be honored at the Pacific Region 9 meeting set for March 21-23 in Santa Rosa.  NCADA promotes students' success by advancing the field of academic advising globally.

"Dr. Yang excels in fostering creative and critical thinking, challenging his students to succeed by linking their academic studies to research and other career goals," said Steve Nadler, professor and chair of the UC Davis Department of Entomolgy and Nematology. "His mentees not only include undergraduate and graduate students, but high school students and postdoctoral scholars and beyond. He attends to the unique needs and interests of each student, respecting their perspectives and ideas. Mentorship, he finds, is really about helping students identify the questions that they want to ask. His success is their success."

In addition to RSPIB mentoring,  Yang mentors many undergraduates in his lab. He has welcomed and mentored students from UC Davis and from around the country with the National Science Foundation Research Experiences for Undergraduates Program (Natalie Gonzalez and Jacob Penner) and the UC Davis-Howard University Historically Black Colleges and Universities (HBCU) Ecology & Evolution Graduate Admissions Pathways (EEGAP) program (Kabian Ritter).

In the past year, Yang mentored 15 undergrads in his lab in studies that included: the nonconsumptive effects on monarch development to see if parasitoid avoidance behaviors in early development have a long-term cost for monarch development; the factors that contribute to herbivory by generalist herbivores on milkweed;the effects of a recently observed plant foliar fungal pathogen on milkweed on monarch growth and development; the costs of switching milkweed species for monarch larvae; and the density dependence in larval and adult blue milkweed beetles

Yang, who joined the UC Davis faculty in 2009, teaches Insect Ecology and Field Ecology. He holds a bachelor's degree (ecology and evolution) from Cornell University, 1999 and received his doctorate from UC Davis in 2006. His goals as an advisor are three-fold:

Yang strongly supports student diversity, under-represented groups, and graduate education. Two of his undergrads, including one Latina, were supported by a supplemental Research Experiences for Undergraduates (REU). He has mentored graduate students from the Entomology Graduate Group, the Graduate Group in Ecology and the Population Biology Graduate   Group. He serves on many guidance, exam and advising committees. He also has participated in mentoring workshops at the Center for Population Biology.

Yang earlier was selected faculty recipient of the 2017 Eleanor and Harry Walker Academic Advising Award from the College of Agricultural and Environmental Sciences (CA&ES).

Sue Ebeler, associate dean of Undergraduate Academic Programs, College of Agricultural and Environmental Sciences,   praised Yang's focus on student diversity, his efforts in helping students link their academic studies to research and other career goals, and his innovative programs working with high school students and connecting these students with undergraduate and graduate student mentors.

The Associated Students of UC Davis nominated him for an Excellence in Education Award in 2012. He received a prestigious National Science Foundation Faculty Early Career Development Award of $600,000 in 2013. 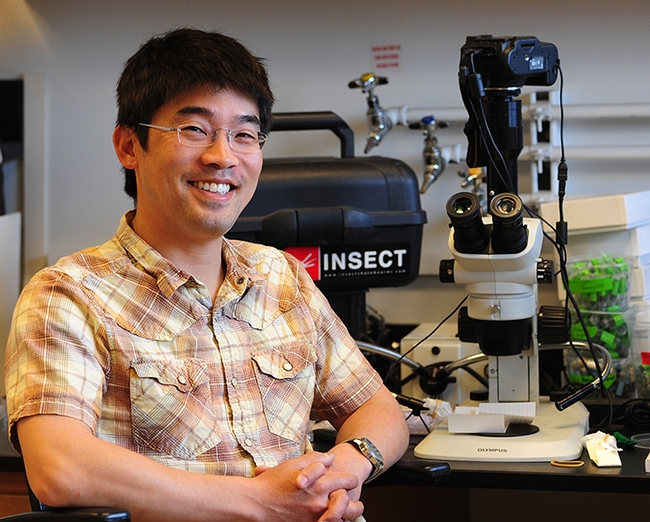