Hamilton, an assistant professor in the Department of Entomology, Plant Pathology and Nematology, will speak on "Understanding Aphonopelma Diversity across the Madrean Pine-Oak Woodlands Hotspot by Integrating Western Science and Traditional Ecological Knowledge (TEK)" at 4:10 p.m., Wednesday, April 21. Click on this link to access the seminar.

Jason Bond, the Evert and Marion Schlinger Endowed Chair in Insect Systematics, UC Davis Department of Entomology and Nematology, and Hamilton's major professor at Auburn University, is hosting the seminar.

Hamilton's naming of a newly discovered tarantula species drew widespread interest in 2016. A team of researchers, led by Hamilton "has discovered a previously unknown species of tarantula and name it after legendary singer-songwriter, Johnny Cash," according to an Auburn University news release.

"The species, Aphonopelma johnnycashi, was found in California near the site of Folsom State Prison, which Cash made famous in his song Folsom Prison Blues," wrote Lindsay Miles of Auburn University's Office of Communications and Marketing. "The mature male Aphonopelma johnnycashi measures up to 6 inches across and is generally solid black in color, much like Cash's distinctive style of dress from which his nickname, 'The Man in Black,' was coined."

"Along with the Aphonopelma johnnycashi, Hamilton's study determined there are only 29 species of tarantula in the United States, 14 of which are new to science. Researchers had previously identified 55 species. The new descriptions nearly double the number of species known from the American Southwest, a region described as a biodiversity hotspot featuring frigid mountains and scorching deserts."

Hamilton received his doctorate in evolutionary biology from Auburn University in 2015, and his master's degree in biology from the University of Texas at Arlington in 2009. 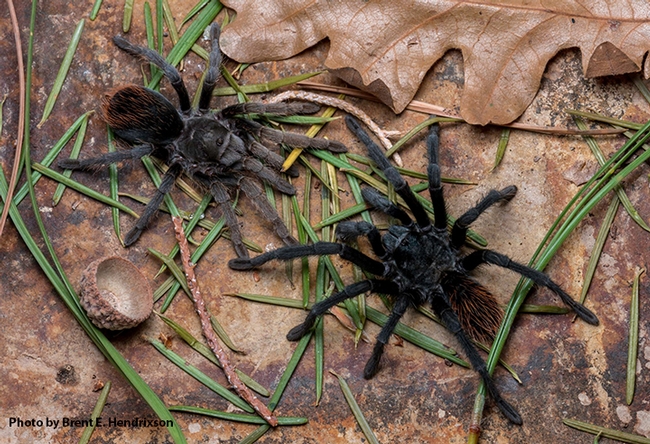 Shirley Luckhart, ESA Founders' Memorial Award recipient
Molecular biologist Shirley Luckhart, a former UC Davis professor who joined the University of Idaho faculty and administration in 2017,  has been selected to deliver the Founders' Memorial Award Lecture at Entomology 2018, the joint annual meeting of the Entomological Societies of America, Canada, and British Columbia, to take place Nov. 11-14, in Vancouver, BC, Canada.

Her subject is Walter Reed (1851-1902), the U.S. Army physician who in 1901 led a team of researchers that linked the spread of yellow fever to mosquitoes. Luckhart will speak on "He Gave to Man Control Over That Dreadful Scourge, Yellow Fever” at the awards breakfast on Tuesday, Nov. 13.

The Entomological Society of America (ESA) established the award in 1958 to honor the memory of scientists who've made outstanding contributions to entomology.

Quite familiar with Reed's work, Luckhart served as a National Research Council postdoctoral scientist at the Walter Reed Army Institute of Research, Silver Spring, Md., after completing her Ph.D. at Rutgers University, New Jersey, in 1995. She went on to accept research and teaching roles at the Uniformed Service University of the Health Sciences, Bethesda, Md. (1996-1998); Virginia Polytechnic Institute and State University, Blacksburg, Va. (1998-2004); and at UC Davis (2004-2016). Walter Reed (Courtesy of Wikipedia)
Reed, although trained as a medical doctor and not as an entomologist, made a “profound impact" and “contributed significantly to the field of vector biology,” ESA wrote in a news release. “Benefits of his work were realized almost immediately: Yellow fever outbreaks in the United States were contained by 1905, and construction of the Panama Canal—which had previously failed in large part due to workers falling victim to yellow fever and malaria—proceeded successfully under new efforts to minimize exposure to mosquitoes and the pathogens they carried.”

"Shirley sees her work as being part of not only her department, school, and university but of the universe of science,” said Ronald Rosenberg, associate director for science at the U.S. Centers for Disease Control's Division of Vector-Borne Diseases, who directed the entomology division at the Walter Reed Army Institute of Research when Luckhart held her postdoctoral position. “She is always interested in what other people do and seems to have innumerable collaborators. "We often spoke of what an extraordinary and brave scientist Reed was. I think Shirley Luckhart is a superb choice to honor his legacy while looking into the future."

Luckhart got her start in entomology more than 30 years ago, "and in that time her research on the biochemistry and molecular cell biology of Anopheles mosquitoes has continued the scientific progress sparked by Reed more than a century ago," related ESA in the news release. "Her work has been continuously funded by the U.S. National Institutes of Health since 1997, focused broadly on understanding the transmission of the causative agent of malaria by Anopheles mosquitoes. Many of her findings have led to interventions that block both infection and transmission, and, as a result, she has several patents in process." (See ESA news release and a list of past Founders' Memorial Award recipients and honorees.)

Luckhart was named a 2014 Fellow of the American Society for Tropical Medicine and Hygiene. In 2017, she received the Medical, Urban and Veterinary Award from ESA's Pacific Branch.

Entomology 2018, themed "Crossing Borders: Entomology in a Changing World" highlights the value of collaboration and cooperation across both geographic and interdisciplinary boundaries.

This year's ESA president is Michael Parrella, dean of the College of Agricultural and Life Science at the University of Idaho, and former professor and chair, UC Davis Department of Entomology and Nematology. Sanford Eigenbrode
DAVIS--Sanford Eigenbrode, professor and chair of the Division of Entomology at the University of Idaho, will speak on “Chemical Ecology in Aphid-Plant-Virus Pathosystems” at the next UC Davis Department of Entomology seminar, set for 12:15 to 1 p.m., Wednesday, May 22 in Room 1022 of the Life Sciences Addition, corner of Hutchison and Kleiber Hall drives.

Host is Michael Parrella, professor and chair of the UC Davis Department of Entomology. The seminar will be videotaped for later viewing on UCTV Seminars.

Of his talk on chemical ecology in aphid-plant-virus pathosystems, Eigenbrode says: “Most plant viruses depend upon vectors for their transmission, thereby coupling their epidemiology, and their ecological and evolutionary success, to the behavior and performance of their vector species. Evidence is accumulating that plant viruses influence the biology and behavior of their vectors such their transmission is enhanced.”

“Our work with luteoviruses is a part of this evidence. Specifically, volatile emissions from virus-infected plants are attractant or arrestant to aphid vectors in 6 pathosystems involving luteoviruses. Furthermore, dynamics of some of these responses with disease progression, age of inoculation and infectious status of the vector also potentially contribute to increased virus transmission. A literature review suggests that plant virus effects on vector biology and behavior differs with mode of virus transmission (nonpersistent, persistent but non replicating, persistent and replicating within the vector). Implications for further study and for application will be presented.”

Eigenbrode focuses his  research on chemical ecology of insect-plant and multi-trophic interactions. This has included an emphasis on the chemical ecology, landscape ecology and management of insect-vectored viruses of wheat, potatoes and legumes in the Pacific Northwest. The regional scope of this work has led to substantial interdisciplinary effort addressing the sustainability of agricultural systems. He is project director for a $20 million USDA National Institute for Food and Agriculture (IFA) Coordinated Agricultural Project on Regional Approaches to Climate Change in Pacific Northwest Agriculture. He has been a co-principal investigator on two National Science Foundation Integrative Graduate Education and Research Traineeship Program (NSF-IGERT) projects, one ongoing, studying resilience of ecological and social systems in changing landscapes, which includes extensive collaboration with the Tropical Agricultural Research and Higher Education Center in Costa Rica.

Eigenbrode is engaged in research in collaboration with philosophers and sociologists focused on improving the process of collaborative science. In 2013, he was named University Distinguished Professor at the University of Idaho.