UC Davis entomology professor Diane Ullman is off to France in November but it's not a dream vacation. It's a dream opportunity: a Fulbright-funded scholarship to research plant virus-insect interactions. She will be studying plant viruses and the insects that transmit them.

Her sabbatical will take her to Montpellier, France, to work with renowned vector biologists Stéphane Blanc and Marilyne Uzest at the National Institute of Agronomic Research (INRA) on the Campus International de Baillarguet near Montpellier. The Biologie et Génetique des Interactions Plante-Parasite (UMR-BGPI, CIRAD-INRA-SupAgro) focuses on plant pathogens and their interactions with arthropod vector in agroecosystems. She will be studying plant viruses in the genus Orthotospovirus (family Tospoviridae). This family holds the only plant infecting members in the order Bunyaviriales. The other viruses in this order infect animals and humans and are transmitted primarily by mosquitoes and ticks.

"New evidence suggests the bunyavirus, Rift valley fever virus (an animal infecting member of the Bunyavirales), uses a multicomponent system in which individual virions do not co-package all segments and infection requires virion populations, a possibility with profound implications for virus evolution and antiviral target discovery,” said Ullman, an international authority on orthotospoviruses.  “I will test the hypothesis that orthotospoviruses use multicomponent genome organization and segment copy regulation occurs in their hosts.”

“Sustainable management of insect-transmitted pathogens is a key concern for food production in France and the United States,” Ullman wrote in her Fulbright application. “Both countries grow many of the same crops and growers face similar challenges from insect-transmitted plant viruses. Current management strategies rely heavily on pesticides that may cause significant health and environmental concerns, including damage to bees and other pollinators, as shown with neonicotinoid pesticides. Clearly, better knowledge about these insect-transmitted viral systems…has potential to reduce pesticide use by providing novel and innovative technologies to manage tospoviruses and thrips in France and the United States.”

Ullman, former chair of the Department of Entomology and Nematology and a former associate dean with the UC Davis College of Agricultural and Environmental Sciences, expects the project will build strong research relationships between UC Davis and Montpellier that will lead to grant applications for international research and scholarly exchange opportunities for scientists, students and post-doctoral scholars. 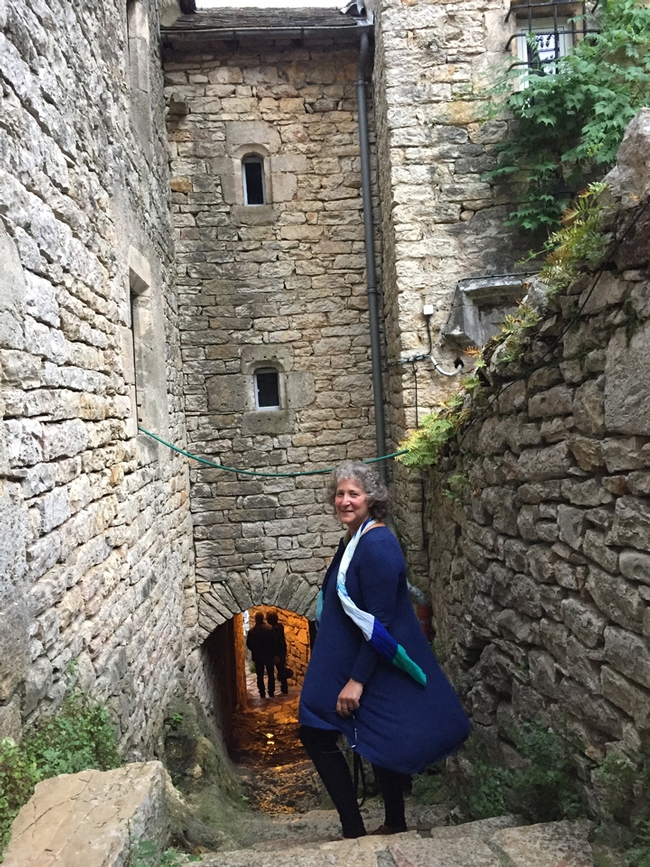 UC Davis professor Diane Ullman has received a Fulbright to France to study plant-insect interactions. This image is of her in Saint-Enimie, which is in the Lozère department in southern France ("Departments" in France are comparable to "counties" in the United States.) This site is a few hours north of Langedoc, where she will be working.
Focus Areas:
Focus Area Tags: Agriculture, Pest Management
Tags: Campus International de Baillarguet (1), Diane Ullman (39), France (1), Fulbright (1), INRA (1), Marilyne Uzest (1), Montpellier (1), National Institute of Agronomic Research (1), plant viruses (1), Stéphane Blanc (1), thrips (6)
Comments: 0
Diane Ullman to Present Seminar on Bridging Art and Science
Published on: April 11, 2018

Professor Diane Ullman of the UC Davis Department of Entomology and Nematology will speak on “Winds of Change: Bridging Art and Science” at a seminar hosted by the UC Davis Wildlife, Fish and Conservation Biology on Wednesday, April 25 in Meyer Hall.

Ullman and Billick created the art/science fusion concept in 1997 with an undergraduate course, “Art, Science and the World of Insects,” that became the centerpiece and inspiration for the UC Davis Art/Science Fusion Program.

Ullman, both a noted entomologist and artist, will relate how the program was developed, why the connections between art and science can be transformational to teaching in both formal and informal settings, and how  community inspirations and educational infrastructure are needed to succeed. “As the winds of change moved across the landscape, bridges between visual and performing arts, design, science and technology were built and programs around this concept have arisen worldwide,” Ullman noted. 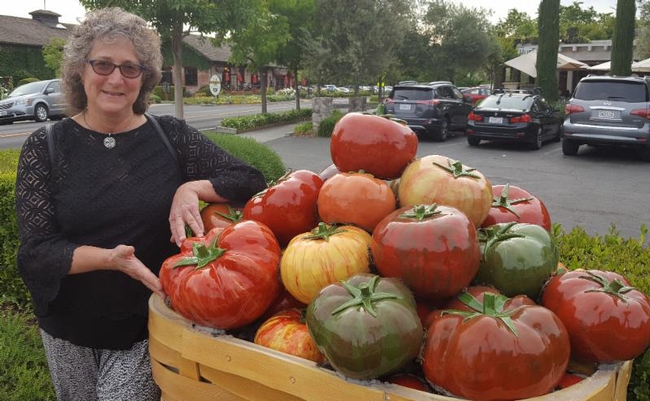 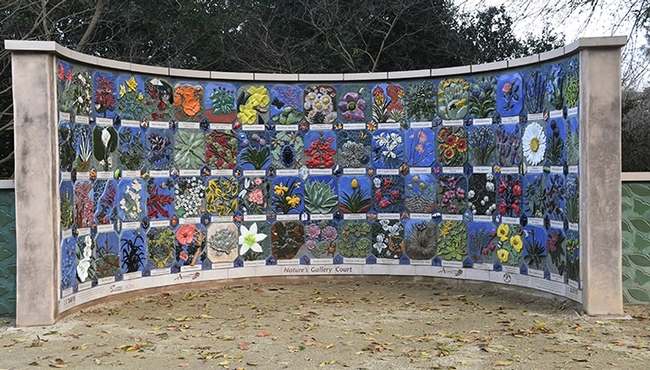 Entomologist-artist Diane Ullman, UC Davis professor of entomology, coordinated the exhibit with Natalie Nelson, director and curator of the Pence Gallery. (Photo by Kathy Keatley Garvey)
A reception heralding the biannual juried show, the Consilience of Art and Science, an exhibit fusing art with science, will be celebrated from 6 to 9 p.m. Friday, Feb. 9 in the Pence Gallery, 212 D St., Davis. The reception is free and open to the public.

Coordinators of the exhibit are Natalie Nelson, director and curator of the Pence Gallery; and UC Davis professor of entomology and artist Diane Ullman,  co-founder and co-director of the UC Davis Art Science/Fusion Program.

The work of 17 artists from a field of 85 worldwide artists are featured in the exhibit, which opened Jan. 26 and continues through March 2.  The jurors--Jiayi Young, UC Davis assistant professor of design and Helen Donis-Keller, professor of biology and art at Olin College of Engineering, Mass.—will present the awards at the Feb. 9th reception at 8 p.m.

English polymath, scientist, Anglican priest, philosopher, theologian, and historian of science William Whewell (1794-1866) coined the term "consilience" in 1840. “Consilience is the linking together of facts and principles from different disciplines to form a broad, comprehensive theory that spans the realms of knowledge,” Whewell said. American biologist, researcher, theorist, naturalist and author E. O. Wilson brought consilience into the modern lexicon with his acclaimed book, “Consilience: The Unity of Knowledge.”

The goals of the exhibition, as announced last December, are three-fold: to show creative work that explores the intersection between art and science; to foster communication between the arts and sciences, and to spark new ways of viewing the world and ourselves, the organizers said.

Art juror Jiayi Young holds a master's degree in fine arts (multimedia and painting) from Washington State University, Pullman, Wash.; a master of science in atomic physics from Kansas State University, Manhattan; and a bachelor's degree in fine arts and physics, Lawrence University, Appleton, Wisc. She works in the field of digital media with an emphasis on the cross-disciplinary areas of design, integrating art and science with cutting edge technology. Young focuses her current creative work  on constructing data-driven interfaces, installations, real-time projection graphics, and performances in public and cultural places.

Donis-Keller, who integrates the fields of art and biology, holds a master of fine arts in Studio Art from the Museum of Fine Arts in Boston and Tufts University, and a doctorate in biochemistry and molecular biology from Harvard University.  She says  an appreciation for the natural world from the molecular level to the biosphere drives her art.

The exhibit is open from 11:30 a.m. to 5 p.m., Tuesday through Sunday through March 2. Further information on the show is available from Nelson at (530) 758-3370 or penceartdirector@sbcglobal.net. 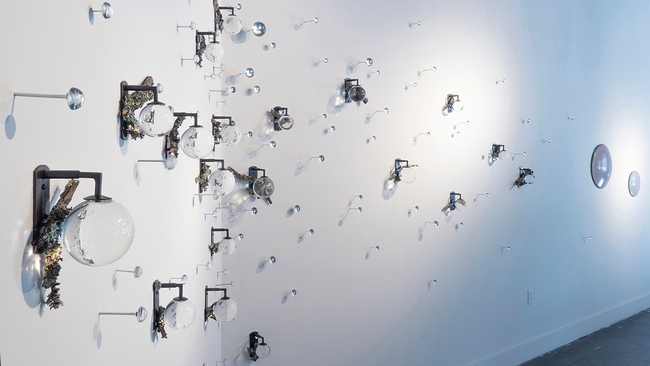 Speakers at the Nov. 16 LASER Event at UC Davis are (from left) Beth Ferguson, UC Davis Department of Design; Petr Janata, Department of Psychology Center for Mind and Brain; and Michael Arcega of the San Francisco State University Department of Art.

From Solar Design to Psychology of Music, to Language and Sociopolitical Dynamics

The event, free and open to the public, begins with networking at 6; and speaker presentations at 6:30. At 7:15, the program includes conversations and rapid fire community sharing. Janata, in his research on how the human brain engages with music, has examined expectation, imagery, sensorimotor coupling, memory, and emotion in relation to tonality, rhythm, and timbre. His work also emphasizes the use of models of musical structure to analyze behavioral and brain data. "I am particularly interested in musical situations that elicit strong emotional experiences, such as music-evoked remembering or being in the groove," he says. Janata, who holds a  doctorate from the University of Oregon, received a Fulbright Fellowship in 2010 to do research in Prague, and in the same year, he received a Guggenheim Fellowship to further his investigations of what music-evoked autobiographical memories can tell us about the functional organization of the human brain.

Arcega is an interdisciplinary artist working primarily in sculpture and installation. His research-based work revolves around language and sociopolitical dynamics. His subject matter, embedded with historic narratives, material significance, and geography, deals with circumstances where power relations are unbalanced. A naturalized American, he says he "investigates cultural markers that are embedded in objects, food, architecture, visual lexicons, and vernacular languages." His work has been exhibited at the Asian Art Museum, Museum of Contemporary Art in San Diego, the de Young Museum in San Francisco, Yerba Buena Center for the Arts, the Orange County Museum of Art, The Contemporary Museum in Honolulu, the Museum of Fine Arts in Houston, Cue Arts Foundation, and the Asia Society in New York, among  others.

Although the LASER event is open to the public, reservations are encouraged at http://ucdlaser04.eventbrite.com. The Facebook page is at https://www.facebook.com/laser.ucd

LASER is sponsored by the Humanities, Art and Cultural Studies, College of Letters and Sciences; the UC Davis College of Agricultural and Environmental Sciences and LASER/ISAST (The International Society for the Arts, Sciences and Technology).   Entomologist/artist Diane Ullman, UC Davis professor of entomology, is a co-founder and co-director of the UC Davis Art/Science Fusion Program, which spearheaded the formation of LASER events at UC Davis.

Diane Ullman's Entomology 1 class has scheduled a Student Art Showcase of ceramics, glass and paintings at a public reception from 6 to 8 p.m., Thursday, June 8 in the UC Davis Environmental Horticulture Courtyard.

The event, celebrating the work of the students, is free and open to the public.

Diane Ullman is a professor of entomology, an artist, and the co-founder and co-director of UC Davis Art/Science Fusion Program. She is the former associate dean for undergraduate academic programs, College of Agricultural and Environmental Sciences. 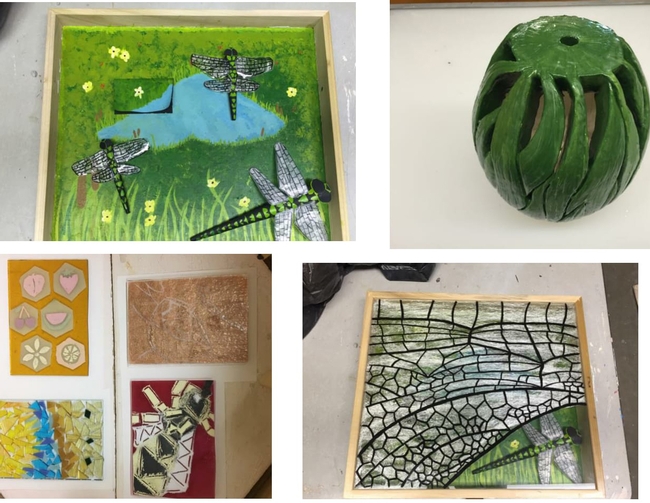