UC Davis forensic entomologist Robert Kimsey on Alcatraz. He was featured in a Kathy Keatley Garvey piece that won the ACE gold award for best news writing. (Photo by Kathy Keatley Garvey)
DAVIS--Two communicators affiliated with the UC Davis College of Agricultural and Environmental Sciences have won a total of five awards from the international Association for Communication Excellence in Agriculture, Natural Resources, and Life and Human Sciences (ACE).

Kathy Keatley Garvey, communications specialist with the UC Davis Department of Entomology and Nematology, won a gold or first-place award in “Writing for Newspapers”; a silver or second-place award for “Writing for the Web” and two bronze or third-place awards for her photographs, one for a feature photo and the other for a service photo.

They will receive the awards at the ACE conference, set for June 8-11 in Charleston, S.C.

Garvey's winning article for best news writing was a light feature on forensic entomologist Robert Kimsey's plans for a field trip to Alcatraz, a day that happened to fall on Super Bowl Sunday. It was titled "Football Game? What Football Game?" The judges gave the story a perfect score, 100 out of 100.

Garvey's silver award for web writing, “What's for Lunch?”,  focused on a lady beetle eating aphids. It appeared on her Bug Squad blog on the UC Agricutural and Natural Resources website. She writes the blog every night, Monday through Friday,  and has never missed a post since launching it on Aug. 6, 2008.

Wrote one judge:
“I admire anyone who can write a blog a day. Congratulations. I love that that the author replies to comments from readers and is active on multiple social networks. And again, kudos on the photography.”

Garvey received a bronze award for a feature photo on her Bug Squad blog. It depicts a praying mantis eating a western tiger swallowtail.

In addition, Garvey received a bronze award for a service photo, of two participants at the 2014 “Bugs and Beer” event sponsored by the Robert Mondavi Institute for Wine and Food Science. It showed a UC Davis student and his friend sharing a bug: one photographing it and one ready to eat it. 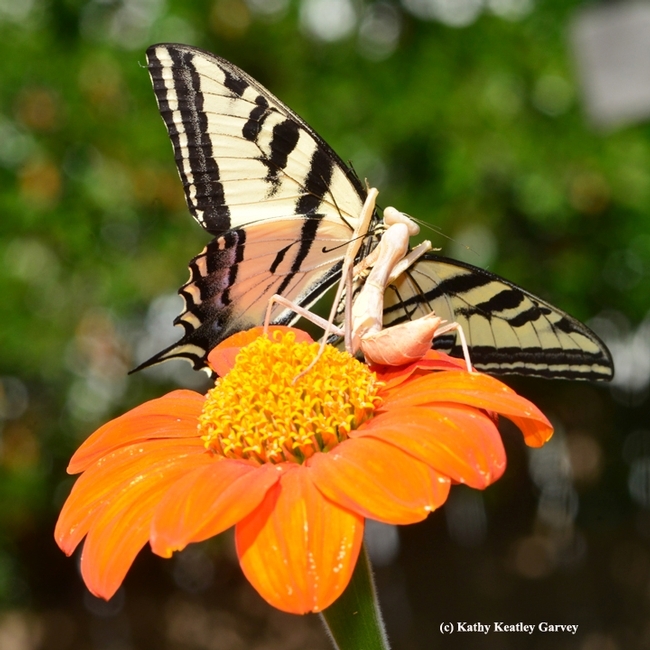 This photo of a praying mantis snagging a Western tiger swallowtail won a bronze award in the ACE competition. (Photo by Kathy Keatley Garvey) 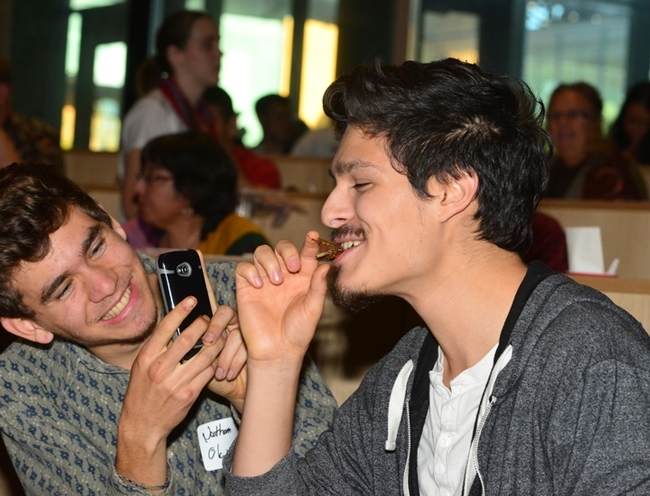 This photo of visiting Polish scientist Jakub Gabka won the gold (first-place) award at the 2014 conference of the international Association for Communication Excellence.
DAVIS--Communications specialist Kathy Keatley Garvey of the UC Davis Department of Entomology and Nematology has received two gold awards and a bronze award for her writing and photography from the international Association for Communication Excellence (ACE), comprised of communicators, educators and information technologists in agriculture, natural resources, and life and human sciences.

Garvey's other gold award was for best "writing on the web" for her "Thankful for Insects"  Bug Squad blog, posted on the UC Agriculture and Natural Resources (UC ANR website).

The bronze award was a third-place award for best series of photos on her Bug Squad blog.

The awards were presented at the organization's annual meeting, held recently in Portland, Ore.

For promotional videos, ACE awarded silver for the UC Cooperative Extension centennial video. The video was produced by the UC Office of the President's multimedia team of Jessica Wheeler, Zach Long and Larissa Branin with direction from Pam Kan-Rice and Cynthia Kintigh of the UC ANR Communication Services and Information Technology (CSIT).