Judges chose his photo as one of the 12 winning images from a field of 560 entries submitted by 133 photographers from multiple continents. Nguyen captured the image at the UC Davis Stebbens Cold Canyon Reserve in April 2017, using his  Canon 7D camera and a MPE 65-mm lens.

Senior insect biosystematist Martin Hauser of the California Department of Food and Agriculture identified the hover fly as a male Platycheirus trichopus (Thomson, 1869).

“I naturally combine my love of insects with my interest in photography to exhibit the beauty and diversity of this often overlooked yet immensely important group of animals,” Nguyen said. “I have been specializing in macro photography ever since I got my hands on my first digital camera over 10 years ago. My body of work consists of mostly insects and related arthropods.”

Nguyen says he does “very simple post processing and extremely minor cropping of the frame, preferring to compose the photo through the lens than to a cheap crop as much as I can.”

Nguyen, who received his bachelor's degree in entomology from UC Davis in 2015, is an alumnus of the 2015 BugShot Macro Workshop, taught by noted insect photographers Alex Wild, John Abbott and Thomas Shahan, in the Hastings Natural History Preserve, a UC Berkeley-operated biological field station in Carmel Valley. “It really was an amazing photographic experience,” said Nguyen, who was awarded a student scholarship to attend the workshop.  Alex Wild, who holds a doctorate in entomology from UC Davis, is curator of entomology at the University of Texas, Austin. Entomologist/photographer Alexander Nguyen photographing an insect. (Photo by Joel Hernandez)
Nguyen serves as an agriculture biologist/weights and measures inspector for the Department of Agriculture, based in Solano County. His duties include surveilling for agriculturally important pests through urban trapping and commodity inspections. He received training as both a student and student employee in various labs in the Department of Entomology and Nematology.

Nguyen often volunteers as a photographer at the Bohart Museum of Entomology outreach events, capturing interactions between staff, fellow volunteers, and the public. “I recently have dabbled in more client-based photography, such as engagement and graduation portraiture, as I have had more time to expand my skill set but arthropod photography still take up the majority of my time.”

He recently launched a website, https://alexandernguyen.smugmug.com/, which serves as a portfolio and storefront for some of his favorite photos.

The hover fly that Nguyen photographed  is “found all the way down the west coast and Rockies into the southern part of Mexico,” Hauser said. For a long time it was regarded as the   western population of widespread P. obscurus (Say, 1824), but since the recent revision of Young (2016), it is considered a valid species. (P. obscurus is found from Newfoundland to the Great Lakes, south to Northern Mississippi and the Carolinas.)

“The larvae of these flies feed on aphids and the adults are pollinators while visiting flowers for nectar and pollen,” said Hauser, pointing out that “The eyes of the males meet on top of the head and the ripples and punctures in the white pollinose pattern on the face are characteristic for the species.”

“For example, images must be sharp, properly exposed, framed well, etc.,” Bradshaw noted. “Additionally, some of the best photos show some action or behavior exhibited by the subject. Unusual and interesting specimens often pique the judges'  interest as well. It is quite an intensive task to judge this many photos and there are often several very good photos that don't make the final cut. However, we encourage photographers to submit again if their photo wasn't selected this year.”

“Members might notice the inclusion of a couple spiders this year,” Bradshaw said. “They are exceptional photos so the committee choose to look past the extra legs.” Insects have six legs; and spiders (arachnids) have eight.

Attendees at the ESA conference, set Nov. 5-8 in Portland, Ore., will receive a free copy of the 2018 calendar, and if they want additional copies, can fill out an order form while there, Rominiecki  said.  Others who wish to purchase the calendar can access www.entsoc.org/bookstore after the conference or call (301) 731-4535 x3017. The cost is $8 for ESA members and $12 for non-members. (Quantity discounts are also available.)

The annual calendar contest is open to members and non-members alike. Macro photographers are also invited to submit  their work to the Insect Salon National Contest, coordinated by the Peoria (Ill.) Camera Club. The winning photos are showcased at the annual ESA conference's Insect Salon.

The 7000-member Entomological Society of America, founded in 1889 and based in Annapolis, Md, is the world's largest organization serving the professional and scientific needs of entomologists and those in related disciplines. 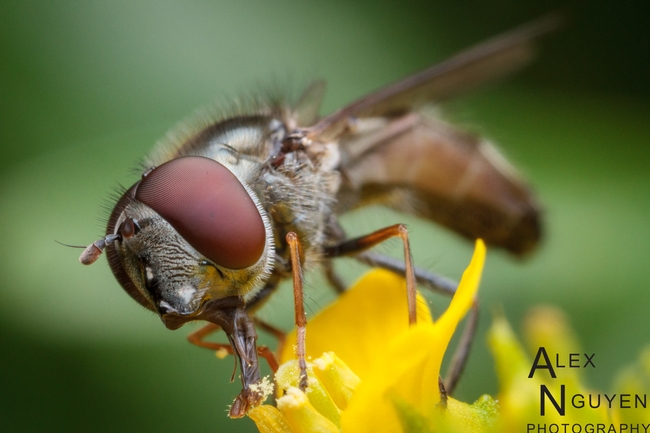 This image of a male hover fly, Platycheirus trichopus, is a winner in the Entomological Society of America's 2018 World of Insects Calender. (Photo by Alexander Nguyen)
Tags: Alexander Nguyen (2), Entomological Society of America (63), entomologist (6), hover fly (1), Joe Rominiecki (1), Martin Hauser (2), UC Davis Department of Entomology and Nematology (370)
Comments: 0
How We Did in the Linnaean Games
Published on: April 7, 2014