Earlier research by the Judah Folkman laboratory of Harvard Medical School showed that cutting off blood vessels that feed a cancerous tumor can stop its growth.

The seven-member research team—five from the Bruce Hammock laboratory of UC Davis—“characterized a novel lipid signaling molecule that can change fundamental biological processes involved in our health and disease,” said lead author and researcher Amy Rand. “We've found that a novel product derived from the metabolism of omega-6 fatty acids stimulates angiogenesis, which may contribute to enhanced tumor growth by providing tumors with oxygen and nutrients.”

“As a highly regulated process, angiogenesis is critical for wound healing and development, but many diseases result in unregulated angiogenesis, including cancer,” explained Rand, a postdoctoral fellow in the lab of Bruce Hammock, a distinguished professor who holds a joint appointment with UC Davis Department of Entomology and Nematology and the UC Davis Comprehensive Cancer Center. “We may be able to control angiogenesis to stimulate wound healing when necessary, but also block tumor growth in patients. Diseases that rely on angiogenesis may be able to be treated in part by changes in dietary lipid exposure or by controlling levels of these metabolites through enzyme inhibitors that block their formation.”

The research, published April 10 in the Proceedings of the Natural Academy of Sciences (PNAS), explains, in part, why inhibiting the soluble epoxide hydrolase (sEH) in some systems is angiogenic whereas combining sEH inhibition with the inhibition of cyclooxygenase (COX) enzymes is dramatically antiangiogenic, which in turn may suppress tumor growth.

“There's uncertainty regarding the link between unsaturated fats and cancer, due to ongoing conflicts between scientific studies and insufficient data,” Rand said. “Because of this, there is a major gap in our understanding of how these essential dietary fats affect our health. We used tools to detect and characterize unknown metabolites from omega-6 unsaturated fats and determined their effect on angiogenesis, to address at least a small part of this uncertainty by focusing on how these fats contribute to cancer tumor growth.”

Hammock, who holds a joint appointment in the UC Davis Department of Entomology and Nematology and the UC Davis Comprehensive Cancer Center, said the research, titled “Cyclooxygenase-Derived Proangiogenic Metabolites of Epoxyeicosatrienoic Acids

Holds long term hope for cancer patients and those afflicted with heart, eye and other diseases. The team also included Christophe Morisseau, Bogdan Barnych, and Kin Sing Stephen Lee all of the UC Davis Department of Entomology and Nematology and UC Davis Comprehensive Cancer Center; Tomas Cajka of the UC Davis Genome Center; and Dipak Panigraphy of Harvard Medical School. Lee is now an assistant professor at Michigan State University.

“Pro and anti-angiogenic therapy can potentially help millions of people worldwide in various diseases such as heart, ulcers, eye and cancer as first demonstrated by Dr. Judah Folkman and his colleagues,” said Panigraphy, formerly of the Hammock lab and now with the Center for Vascular Biology Research, Beth Israel Deaconess Medical Center, Harvard Medical School, and the school's Department of Pathology.

“While the COX and sEH pathways can be targeted with drugs, their interaction is poorly understood,” Panigraphy said. “These studies by Rand et al demonstrate for the first time new specific mechanisms whereby targeting the sEH pathway can be both pro- and anti-angiogenic and has the potential to help patients with devastating diseases such as in the eye and cancer where blocking angiogenesis is desired.”

Rand, who received her doctorate in chemistry from the University of Toronto, Canada, in 2013, the same year she joined Hammock's biological analytical chemistry lab, said she's “always been interested in research that combines chemistry and biology to enhance our understanding of human health.”

Future work? “We aim to understand the direct involvement of these omega-6 fatty acid metabolites with cancer tumor growth and metastasis.”

Rand last year received the $100,000 Judah Folkman Fellowship for Angiogenesis Research from the American Association for Cancer Research. She won the highly competitive international award for her proposal, “Regulation of Cancer Angiogenesis from the Metabolism of Epoxy Omega-6 Fats.”  Rand joined Hammock's biological analytical chemistry lab in 2013 and was a fellow on the Oncogenic Signals and Chromosome Biology T32 Training Grant, UC Davis Department of Microbiology and Molecular Genetics.

The late Judah Folkman (1933-2008), a Harvard Medical School professor considered the father of angiogenesis research, “is best known for pioneering the concept of blocking angiogenesis (the development of blood vessels) to control cancer growth," Hammock said. "This concept has resulted in a number of anti-cancer drugs and has had a major impact on cancer treatment.  Of course, blood vessel development is also critical for survival."

Folkman discovered that cutting off the blood vessels that feed the tumor can stop cancer tumor growth. His revolutionary work has led to the discovery of a number of therapies based on inhibiting or stimulating neovascularization. Inhibitors of the sEH pathway are moving toward human trials to control neuropathic pain, but if combined with nonsteroidal anti-inflammatory drugs can block tumor growth by blocking angiogenesis. So Dr. Sung Hee Hwang combined inhibitors of both pathways into one molecule which is being investigated in cancer models at the UC Davis Cancer Center by Dr. Paul Henderson and Northwestern University Medical School by Dr. Guang-yu Yang.

This work was supported by NIEHS and the NIEHS Superfund Program; and two of Rand's grants: the Oncogenic Signals and Chromosome Biology T32 Training Grant, NIH/NIEHS; and her 2016 AACR Judah Folkman Fellowship for Angiogenesis Research. 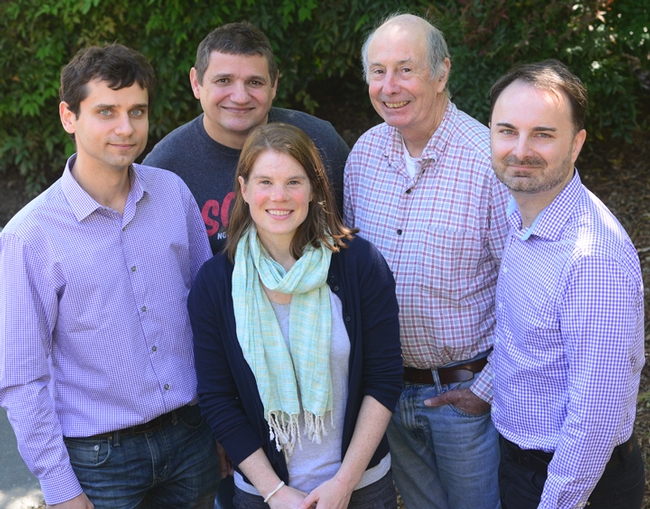