“Spiders are an incredibly diverse group with more than 50,000 species described with probably another 200,000 remaining to yet be discovered,” said Bond, who joined the department in July from Auburn University, Alabama. “They are quite ancient, with fossils dating back well over 300 million year and are known to be exclusively predatory. In fact, based on a study published last year, spiders are estimated to consume somewhere in the neighborhood of 800 million tons of insect biomass.” Spiders are an incredibly diverse group with nearly 50,000 species described with probably another 250,000 undescribed.

“To capture insects, and other prey item--sometimes even vertebrates-- most spiders employ silk and venom to snare and subdue their victims,” the arachnologist said. “Spider silk is an amazingly strong, proteinaceous material that is produced in many different forms; venoms are likewise complex, diverse proteins. All of this to say – what's not to like – spiders are a tremendously ecological important predatory group, that has persisted on the planet for 100s of millions of years and employ a remarkable suite of silks and venoms to make a living.”

Bond's other research interests include millipedes (diplopods) and darkling beetles (tenebrionids). He studies how the fog-basking tenebrionids (genus Onymacris) in the Republics of Namibia and Angola, collect water. Arachnologist Jason Bond confers with his postdoctorate, Vera Opatova, newly arrived from Auburn University. (Photo by Kathy Keatley Garvey)
Born in Johnson City, Tenn., Jason spend his childhood in Lewisville, N.C., a small town just outside of Winston-Salem. His Tennessee roots run deep. His father grew up on the campus of East Tennessee State University, where his grandfather served as head of facilities. “The Bond Building” bears his name.

What drew him to arachnology? Spiders sparked his interest as an undergraduate researcher at Western Carolina University. “I had this amazing opportunity to work with two really well-respected arachnologists, Drs. Jackie Palmer and Fred Coyle,” Bond recalled. “My first research project was related to functional morphology (evolution of the spinning apparatus in more primitive spiders) but quickly shifted to systematics and taxonomy.”

“A real defining moment for me was a trapdoor spider project as part of a Costa Rica Organization for Tropical Studies field course,” he added. His relatively newfound interest in spider evolution and systematics coincided with the publication of E.O. Wilson's book, “The Diversity of Life.” Wilson's emphasis on the importance of biodiversity and the relevance of taxonomy and systematics “really influenced my career path--away from other options I was considering at the time like lipid biochemistry or bacteriology--bullets well-dodged!” he quipped.

“Although I have always worked on terrestrial arthropods--even as an undergraduate when I started working on spiders-- my education/experience has predominantly been in biology departments,” Bond said. “That said, I was hired in to my first position in 2002 at East Carolina University as an entomologist.”

Bond joined the UC Davis faculty after a seven-year academic career at Auburn University, Ala.. He served as professor of biology and chair of the Department of Biological Sciences from January 2016 to July 2018, and as curator of arachnids and myriapods (centipedes, millipedes, and related animals) at the Auburn University Museum of Natural History, from August 2011 to July 2018. A female Myrmekiaphila tigris: the Auburn Tiger Trapdoor Spider. (Photo by Jason Bond)
What brought him to UC Davis? “That's a relatively parameter rich question. First and foremost, this is an amazing university with an equally amazing Department of Entomology and Nematology. The opportunity to have great colleagues who are all studying arthropods and related ecdysozoans--the most diverse animal groups on the planet!--was impossible to pass up. Second, it was an incredible honor to be considered for the Schlinger Chair in Insect Systematics. Although I only knew Ev Schlinger through correspondence --back in the days when folks actually wrote letters and sent postcards--I was very well aware of his contributions to systematics, both intellectually and through his philanthropy. His work on acrocerids flies, not surprisingly, was very well known to the spider community.”

In fact, Bond named a species of trapdoor spider (Apomastus schlingeri Bond and Opell 2002) in Evert Schlinger's honor. “At the time it was the type species for a monotypic new California endemic genus of trapdoor spiders we described (Apomastus),” he said. The genus now includes another prominent species, Apomatus kristenae Bond 2004, which Bond named for his wife, Kristen.

“Third, much of my research over the years has been in the American Southwest, particularly California,” the new UC Davis faculty member related. “I am chomping at the bit to get the lab setup and everything settled at home so I can start spending time in the field studying and collecting California trapdoor spiders! And, finally, this was a mid-career opportunity to get back 100 percent to research and teaching.”

“Although I remain very fond of and grateful for my past few years at Auburn University, I was primarily in administrative roles there, first as museum director, and then department chair, and thus did not have near the time to devote to students and scholarly activities as I would like. The move to Davis really represents the first time in career when I will have the time to really focus on research and teaching in a truly meaningful and thoughtful way.”

Although the noted arachnologist has no spiders named for him, one species of mites, Torrenticola bondi, bears his name.

At UC Davis, Bond will be re-establishing and teaching the insect systematics course, ENT 103.

“My understanding is that the course was intended to introduce students to systematic methods, classification, and phylogenetic--of course, with an emphasis on insects,” he noted. “I think this course would be a blast to teach--so much has changed in systematics over the past 5 to 10 years, particularly with the introduction of next generation sequencing technologies--phylogenomics. That said, the basics of classification and taxonomy remain as relevant today as in the past; thus I would anticipate the course also covering some historical and more traditional topics, as well.” He also hopes to launch an arachnology course at Davis with arachnologist Joel Ledford of the Department of Plant Biology.

In the meantime, the endowed chair is establishing his lab in the Academic Surge Building on Crocker Lane. “The lab is going to get busy here pretty quickly,” he said, adding that his first postdoc, Vera Opatova and his second postdoc Jim Starrett from Auburn are here and will be joined soon by three graduate students making the move from Auburn --Rebecca Godwin, Xavier Xahnle, and Lacie Newton. Aptostichus simus, California Coastal Dune Spider. (Photo by Jason Bond)
Does he have a philosophy of education? “First, I tend to think teaching philosophies are a bit overrated and mine has certainly evolved over the years. Most of my higher education experience was ‘old school'; that is professors lectured and we took notes and that always seemed to be solid to me--it helped if the professor was knowledgeable and entertaining—I suspect that's what many of us once upon a time considered to be good teaching. And, it actually worked for a lot of us. However, times, technology, and students have changed, and we know a LOT more about how students learn and importantly we know a lot more about variation in how students learn based on a number of demographic-based parameters, that is, the notion of one-size, one-philosophy fits all is false. As such, I guess I tend to think that a good philosophy is one that fosters critical thinking--particularly in such an information rich landscape--and is an open and inclusive learning environment. That said, as biologists--sensu lato (in the broad since)-- information content remains important--there are facts, things that students need to know/learn to be able to think about them critically or apply them to broader questions.”

“Strictly speaking scientifically, I would have to say that some of our recent discoveries with respect to spider evolution have been some of the more exciting highlights,” Bond said. “However, working with students in the lab and seeing them to go on and be successful also stands out as some of the biggest highlights along the way. Everybody knows it's a tough job market out there and I would guess that most Ph.D. advisors share some of the stress when their students are applying for jobs – having them get the jobs they want and be successful is always a highlight.”

Most recently, his former Ph.D. student “and good friend and colleague” Chris Hamilton landed an academic position in the University of Idaho's Department of Entomology “and I couldn't be happier for Chris. He's a remarkable biologist, teacher, husband, and dad, with an incredible storied life who is going to do great things; it's great to see him be successful and get the type of job that he wanted.”

Meanwhile, Jason and his wife, Kristen and daughter, Elisabeth are settling into their new Davis home. “We've traveled together a good bit in the United States--a recent trip cross country that also included our yellow lab Daisy-- but also in Africa,” he said. “I am an avid fly fisherman and motorcyclist--since moving to Davis, I have managed to sneak away a couple of times for rides up in the hills heading toward Napa and Saint Helena. At home, I really like to cook – Kristen and I like good food and very red wine.”

What do people NOT know about him? What would surprise them? “I guess a lot of folks would be surprised to learn that I have not always been an ‘academic,' Bond said. “I was an aircraft mechanic in my younger years. When I was in high school, I spent some time in Hamburg, West Germany--at the time East/West was still split--as an apprentice aircraft builder as part of a vocational student exchange between a number of companies in Hamburg and Winston-Salem.”

“After high school I went in to the U.S. Army where I served for a number of years as a UH-60 Blackhawk helicopter crew chief. I learned from that experience that I would probably rather be doing other things so with money for college courtesy of the GI Bill, I got out and headed back to North Carolina to go to school. My choice of schools was naively based on a really attractive brochure showing a campus nestled in the mountains of North Carolina--relative to my current surroundings up on the DMZ in Korea--but nevertheless turned out to be a great choice.”

Spiders, too, turned out to be great choice--a bond, “a Jason Bond,” if you will, as strong as spider silk. 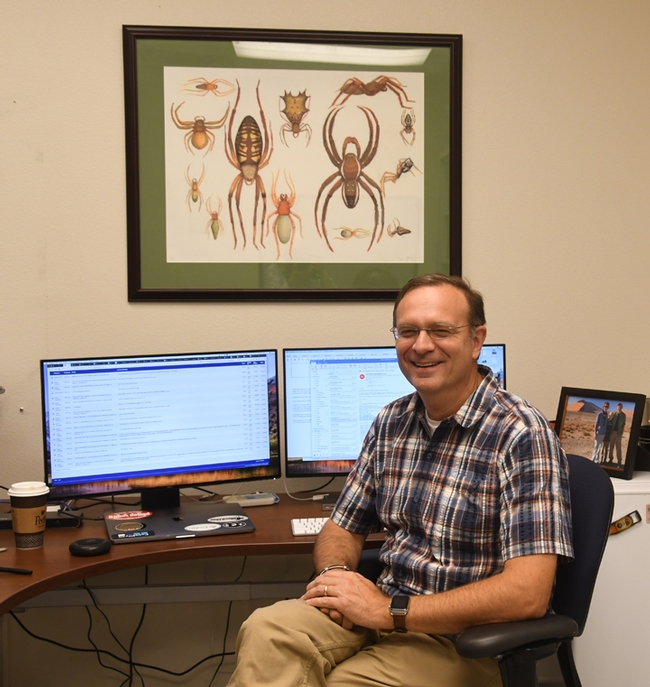 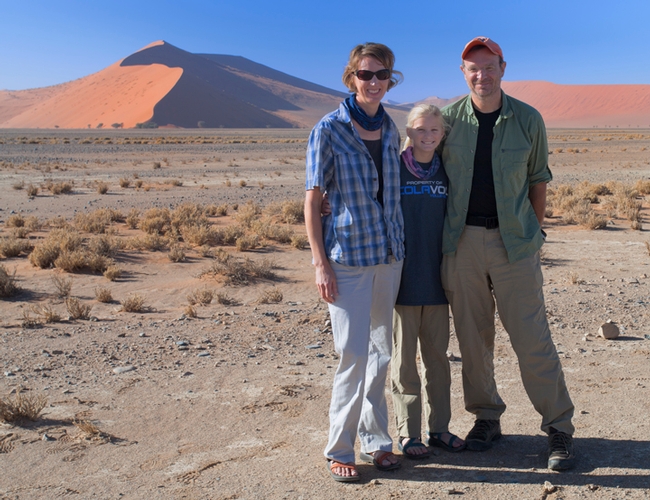