Eric Mussen, 1944-2022
Reservations are now underway for the celebration of life for Dr. Eric Carnes Mussen, an internationally known 38-year California Cooperative Extension apiculturist and an invaluable member of the UC Davis Department of Entomology and Nematology faculty. He died June 3 of liver cancer at age 78.

The celebration of life will take place from 4 to 6 p.m., Sunday, Aug. 28 in the Putah Creek Lodge, UC Davis campus. The deadline for reservations is Aug. 1. RSVP here: https://ericmussencelebrationofli.rsvpify.com.

“Eric was a giant in the field of apiculture,” said Steve Nadler, professor and chair of the UC Davis Department of Entomology and Nematology. “The impact of his work stretched far beyond California.”

The event will include speakers, a PowerPoint of images showcasing his life, a memory table, songs by the Davis doo wop chorus he belonged to, and light refreshments. The crowd, expected to fill thePutah Creek Lodge, will include family and friends; UC Davis faculty, staff and students; bee and almond industry colleagues; and his musician friends. For those unable to attend, the event will include a webinar (register here) produced by UC Davis distinguished professor Walter Leal of the Department of Molecular and Cellular Biology, a former chair of the Department of Entomology. It also will be on YouTube.

Dr. Mussen, known to all as “Eric,” joined the UC Davis entomology department in 1976. Although he retired in 2014, he continued his many activities until a few weeks prior to his death. For nearly four decades, he drew praise as “the honey bee guru,” “the pulse of the bee industry" and as "the go-to person" when consumers, scientists, researchers, students, and the news media sought answers about honey bees.

Colleagues described Eric as the “premier authority on bees and pollination in California, and one of the top beekeeping authorities nationwide,”  “a treasure to the beekeeping industry," and "a walking encyclopedia when it comes to honey bees."

When Eric was nominated (and received) the 2013-14 Distinguished Service Award for Outstanding Extension from the UC Agriculture and Natural Resources (UC ANR), MacArthur Genus Awardee Professor Marla Spivak, Distinguished McKnight University Professor Apiculture/Social Insects at the University of Minnesota, wrote:  "Without question, Eric is the No. 1 Extension person dealing with honey bees in the nation, if not the world. Research colleagues, beekeepers and the public are all very lucky to have him.”  (See tribute on UC Davis Department of Entomology and Nematology website.)

In his leisure time, Eric sang doo wop for more than a decade with a performance class taught by Frank Fox of Davis. "The class taught was always a performance class and culminated in a concert--the Davis Arts Center Doowop Ensemble was what I called it," Fox said. "Eric sang bass but often did leads as well." Among Eric's favorites: "The Duke of Earl," "Blue Moon, "All I Have to Do is Dream" and "I Understand  Just How You Feel." 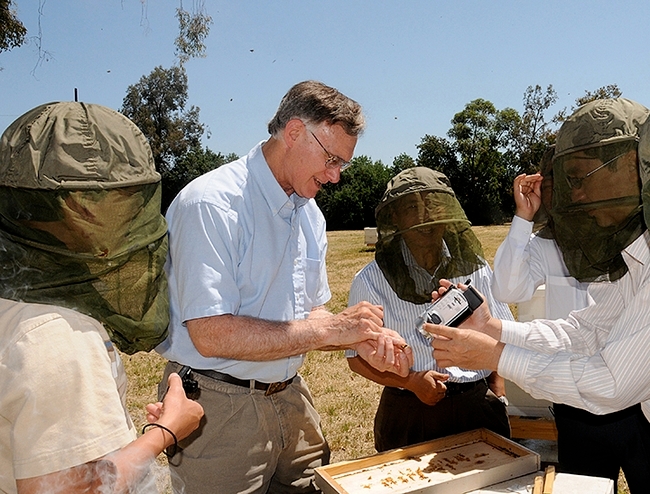