Professor Denison, who retired in 2018, joined the department in 1992 and advanced to professor in 1997.  He served as a researcher in the UC Davis SRP, funded by National Institute of Environmental Health Sciences (NIEHS), for more than 25 years.

Over a 44-year period, Denison focused his research on understanding the molecular mechanisms by which a protein known as the Ah receptor mediates the biological/toxicological actions of dioxins and related chemicals.  He was widely acclaimed for his development of the Chemical Activated LUciferase gene eXpression (CALUX) assay, a cell-based bioassay used to detect specific environmental contaminants, including, but not limited, to dioxin-like chemicals and environmental hormones (endocrine disruptors).

The test, approved by the intergovernmental Organization of Economic Cooperation and the U.S. Department of Environmental Protection Agency, is the international standard for detecting environmental contaminants in the protection of human health. Denison also made other seminal contributions to the Ah receptor field and was a leader in advancing the study of Ah receptor biology, said UC Davis distinguished professor Bruce Hammock, the founding director of UC Davis SRP and a close friend and colleague of Denison's. The Denison family: Mike and Grace with their dog, Murphy, a Coton de Tulear. Murphy passed in April 2020.
“Mike made important discoveries to better protect human health from exposure to persistent organic pollutants and was an impressive leader, innovator, scientist, teacher, mentor, and advocate who positively impacted the lives of his many students and colleagues,” said Hammock, who holds a joint appointment with the Department of Entomology and Nematology and the UC Davis Comprehensive Cancer Center.

“He is best possibly known for his fundamental work on the mechanism of action of TCDD and the translation of this knowledge into a quantitative, rapid and inexpensive assays for tetrachlorodioxin like chemicals and other chemicals that bound to the aryl hydrocarbon hydroxylase receptor," Hammock said. "He went on to use the CALUX format to measure a number of other small molecule receptor interactions. Mike was also funded for much of his career by competitive grants from NIEHS, including his MS and PhD work.”

Robert Rice, professor and chair of the Department of Environmental Toxicology, said that "Mike's absence leaves quite a void in our department. Even in retirement, he continued to be a source of wisdom and amusement, and he was still an inspiration to students."

Rice added that he first met Denison in 1992 when he joined the faculty, "and I ended up being department chair in recent years after he declined the position."

Denison, trained in biology, marine biology, animal physiology and environmental toxicology,  received his associate of arts degree in biology from the County College of Morris, N.J. in 1975, and his bachelor's degree in marine biology from St. Francis College, Biddeford, Maine, in 1977. He obtained his master's degree in animal physiology from Mississippi State University, Starkville, in 1980, and went on to receive his doctorate in environmental toxicology from Cornell University, Ithaca, N.Y., in 1983. Denison did postdoctoral research at the Department of Clinical Pharmacology, Hospital for Sick Children, Toronto, Canada, from 1983 to 1985, and with Stanford University's Department of Pharmacology, 1985-1988.

Denison began his academic career as an assistant professor in the Department of Biochemistry at Michigan State University, East Lansing, from 1988 to 1992, and then relocated to the UC Davis Department of Environmental Toxicology.

Michael and his twin brother, Steven, were born on Dec. 8, 1954, in Shirley, Mass., the sons of Alan (deceased) and Alma Denison.  While the father served in the U.S. Army, the family lived in numerous places around the world and settled in Wharton, N.J. when boys were 11.

“Michael was a happy and optimistic person,” said his widow Grace Bedoian, who retired in 2014 as a UC Davis SRP administrator and a member of the Hammock lab.   “The only thing he took seriously was science, which he loved."

“His typical day was spent at work, conducting his research and mentoring students, returning home and making a wonderful dinner at the end of the day, and then retreating to his home office to work until the wee hours of the following morning," she said. "He maintained curiosity and wonder of the world around him.  He loved to solve problems and figure out how things worked.  He was generous with his friends and colleagues alike and always quick to offer his services to those in need."

Denison is survived by his widow, Grace; his mother, Alma; two brothers (Steven and Daniel) and their wives (Gloria and Angela); two nieces, two nephews, and several grandnephews.

The family thanks the staff at Yolo Cares of Davis for “their exceptional expertise, kindness and compassion in providing in-home hospice care for Michael.  All of the staff members at Yolo Cares are truly angels on this earth.” In lieu of flowers, donations may be made to Yolo Cares by contacting (530) 758-5566 or http://www.yolocares.org. 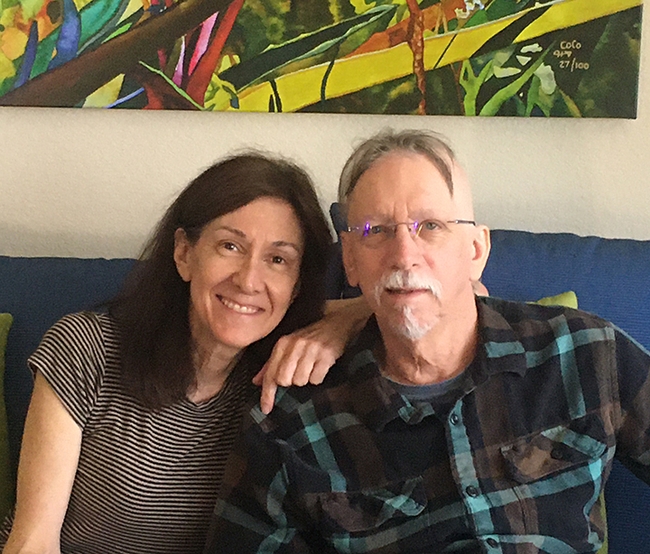 Michael Denison and his wife, Grace Bedoian. He retired as a distinguished emeritus professor in 2018, and she as a UC Davis Superfund Research Program administrator in 2014. This image was taken in 2021. 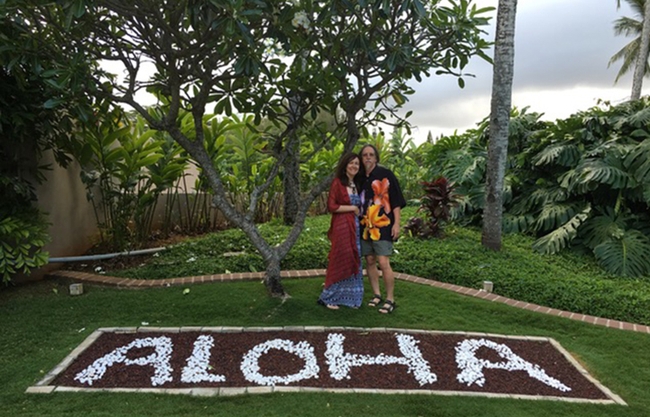 Bruce's Big Battle at Briggs, which draws professors, researchers, visiting scientists, postdoctoral scholars, graduate students and undergraduate students and their friends and families, showcases what the internationally known Hammock lab does for camaraderie and fun.

The event amounts to a 10-minute break from their 52 weeks of scientific work.

The water warriors are so proficient that the event actually spans about 8 to 9 minutes, said organizer Christophe Morisseau, associate research scientist.

Hammock, a distinguished professor of entomology who holds a joint appointment with the UC Davis Department of Entomology and Nematology and the UC Davis Comprehensive Cancer Center, launched the water balloon fest in 2003 as a way to build camaraderie and gain relief from the heat. Temperatures soared to 98 degrees on Thursday, July 24, the afternoon of the battle.

For the occasion, the water warriors first filled 2000 small water balloons on the Briggs Hall lawn.

“We did try filling the balloons differently this year to conserve water,” said Hammock lab program manager Cindy McReynolds. “We devised a filling station out of drip line and valves so we could fill the balloons outside and also turn off the water when not in use.” Louisa Suet Yi Lo fills a water balloon. (Photo by Kathy Keatley Garvey)
“Water conservation was a big topic surrounding the event, so we also used it as an opportunity to discuss ways we have changed our daily routines to conserve water,” McReynolds said. “ The most popular lifestyle change was not watering lawns, but others included washing dishes in buckets and using the grey water to water plants, taking shorter showers and/or reducing water in baths. The goal was for everyone to try one new water conservation practice to make up for the water used during the battle.”

The Hammock lab has always enjoyed an international presence. Of the researchers this year, 8 are from China, 3 from France, 2 from Hong Kong, 2 from the Ukraine, and 1 each from India, Japan and Canada.

“They caught on quickly,' said Louisa Suet Yi Lo, administrative assistant. “It didn't take long  for them to warm up and they really enjoyed dousing each other, especially the big boss, Bruce Hammock.”

"It was great seeing everyone relaxing and having so much fun," said Grace Bedoian of the administrative staff who will be retiring July 30. "They work hard and they play hard.” 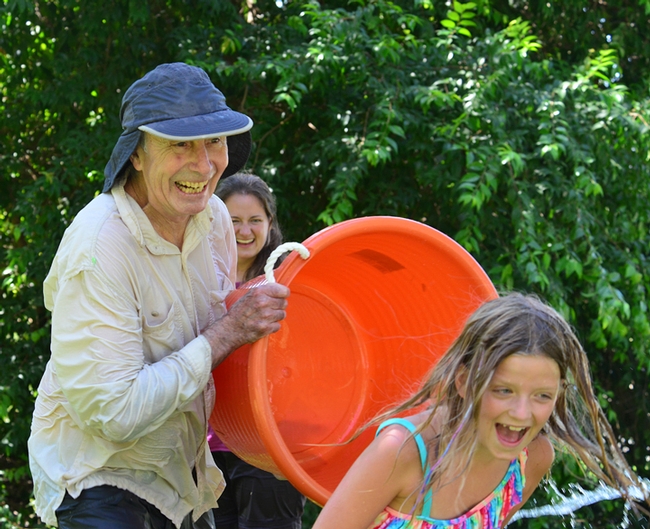 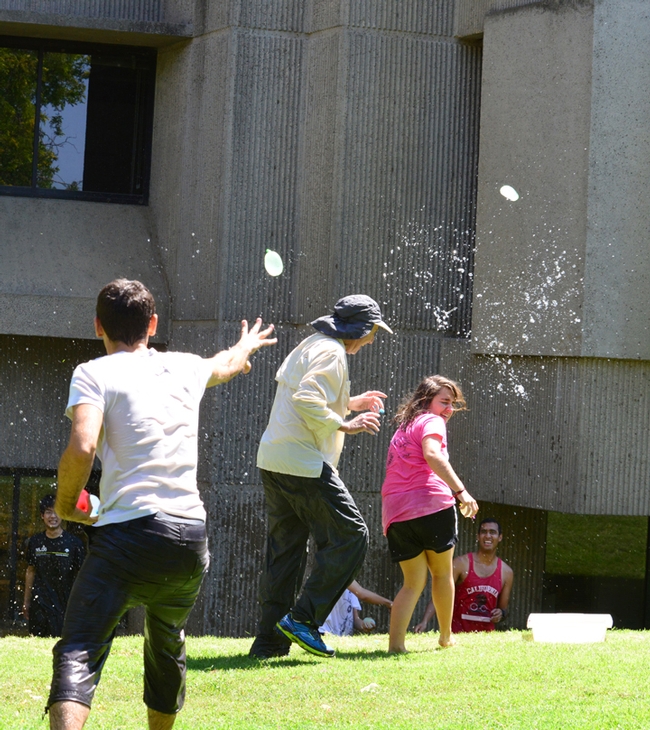 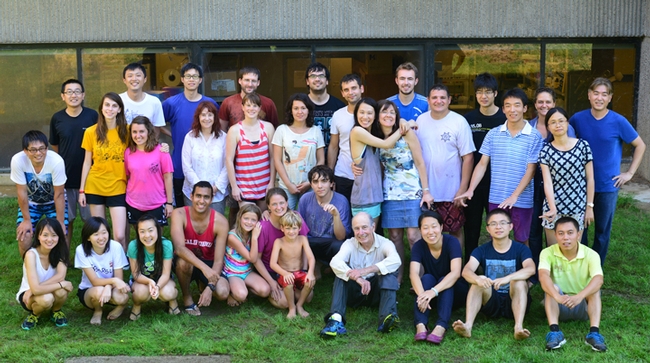