His topic is "Pro-Resolution Lipid Mediators in the Resolution of Cancer," said Hammock, who holds a joint appointment with the UC Davis Department of Entomology and Nematology and the UC Davis Comprehensive Cancer Center.

The abstract: "For decades, cancer therapy has focused on killing cancer cells, from broad cytotoxic therapy to the inhibition of specific molecular pathways. However, cytotoxic cancer therapy may inherently be a double-edged sword as apoptotic tumor cells ('debris') may stimulate inflammation and tumor growth via a pro-inflammatory ‘cytokine storm'. Environmental carcinogens (e.g. Aflatoxin B1) can also generate debris which may stimulate inflammation and tumor dormancy escape. This is clinically relevant as 30-90% of humans harbor dormant tumors."

"To stimulate the natural debris-clearing process which would eliminate this source of tumor stimulation, we utilized endogenous specialized pro-resolving mediators (SPMs), specifically maresins, which are biosynthesized by human macrophages from endogenous docosahexaenoic acid. Additionally, novel COX-2/sEH inhibitors (e.g. PTUPB) can stimulate inflammation resolution more potently than either COX-2 or sEH inhibition alone by stabilizing epoxy-eicosanoids, promoting the formation of pro-resolving mediators such as lipoxins, and activating anti- inflammatory cytokine programs. In dramatic contrast to conventional anti-inflammatories, pro-resolving lipid mediators clear debris and counter-regulate a series of pro-inflammatory cytokines. We demonstrate that the resolution of inflammation represents a novel modality in cancer treatment by enhancing endogenous clearance of tumor cell debris and counter- regulating pro-tumorigenic cytokines."

Earlier this year, a collaborative research paper authored by Hammock, Panigrahy and colleagues won the Editor's Pick of the Journal of Investigation for the month of July. The paper, “Preoperative Stimulation of Resolution and Inflammation Blockade Eradicates Micrometastases,” relates how blocking inflammation and/or activating the resolution of inflamation before surgery can eradicate small tumors and promote long-term survival in experimental cancer modes. (See news story.)

Dipak was accepted into medical school at Boston University at age 17. He trained in surgery with Dr. Roger Jenkins, who performed the first liver transplant in New England. Over the past decade, Dr. Panigrahy led angiogenesis and cancer animal modeling in the Judah Folkman laboratory.  He  joined the Beth Israel Deaconess Medical Center in 2013, and in 2014 was appointed assistant professor of pathology and currently has a laboratory in the Center for Vascular Biology Research. 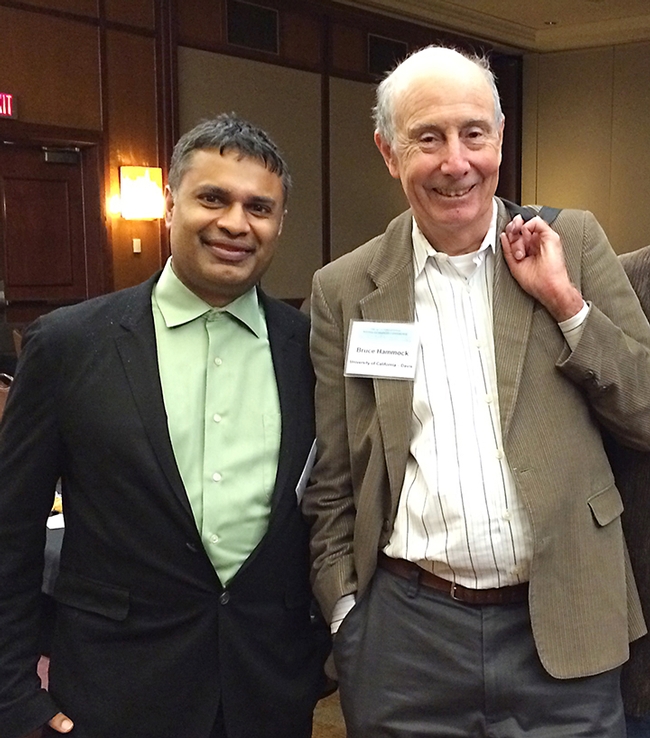 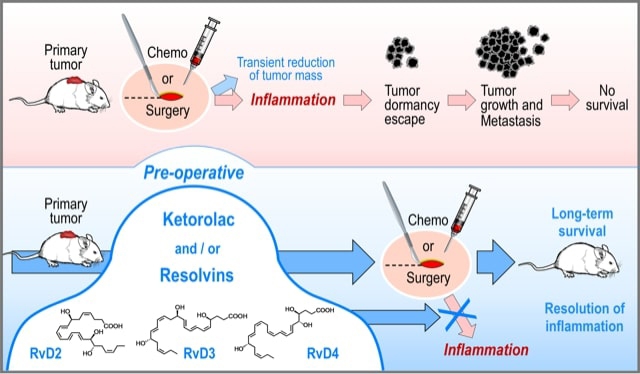 Researcher Bruce Hammock, UC Davis distinguished professor (Photo by Kathy Keatley Garvey)
Newly published research by an international team of scientists based at the Massachusetts Eye and Ear Infirmary and the University of California, Davis, offers “promising therapeutic potential” for age-related macular degeneration (AMD), the most common cause of blindness of the elderly in industrialized countries.

The research, published in the current edition of the Proceedings of the National Academy of Sciences, shows that bioactive products from a major family of enzymes discovered in the UC Davis lab of Bruce Hammock, reduced the eye disease severity in an animal model with neovascular AMD. The compounds regulated inflammatory immune cells both locally—in the retina--and systemically.

Previous research has largely ignored the role of immune cells, “which likely are a major contributor in this pathologic process,” said corresponding author Kip Connor, a vision scientist at the Massachusetts Eye and Ear Infirmary and an assistant professor of ophthalmology at Harvard Medical School.

The chronic, progressive disease affects as many as 11 million Americans but that number is expected to double by 2020, said Connor, one of the nine international experts in lipid biology and AMD involved in the study. Globally, some 196 million are projected to get AMD by 2020. The risk of getting AMD increases from 2 percent for those ages 50-59, to nearly 30 percent for those over the age of 75, according to the Bright Focus Foundation, which helped fund the research.

Hammock, a distinguished professor who holds a joint appointment with the UC Davis Department of Entomology and Nematology and the UC Davis Comprehensive Cancer Center, expressed hope that the team “that Dr. Connor's laboratory will find a solution to this devastating human health problems."

The study, based in Connor's laboratory at Harvard, “shows how rapidly fundamental knowledge of physiology and regulatory biology can be translated to practical solutions for a major type of blindness,” Hammock said. “I was at Harvard several years ago and saw a poster outside a laboratory on AMD. This resulted in me meeting Eiichi Hasegawa, a doctorial fellow in the Connor lab, and through him, Kip, which has led to a long-term collaboration.”

“I also see the compounds that I made moving to human clinical trials with the hope of treating pain and inflammatory diseases such as AMD,” Hammock added. Chemist Kin Sing Stephen "Sing" Lee worked on the project at UC Davis. (Photo by Kathy Keatley Garvey)
Through the collaborative research, the scientists were able to characterize a functional class of lipids and define how these molecules modulate disease resolution in an animal model of AMD. “Our findings not only show promising therapeutic potential for neovascular AMD,” Connor said, “but also for other major conditions that involve angiogenesis and inflammation, such as atherosclerotic disease and cancer.”

“In patients with advanced AMD, abnormal blood vessels start to develop from underneath the light-sensing layer of the eye in a process known as choroidal neovascularization (CNV),” Connor explained. “Such cases, termed neovascular or “wet” AMD, account for 10 to 15 percent of AMD cases,develop abruptly, and rapidly lead to substantial vision loss.”

“Although we do not fully understand how and why AMD develops, identifying additional mechanisms that regulate abnormal blood vessel growth in the eye beyond what we currently know could open up a range of possibilities for new research and treatments for AMD,” Connor noted.

The team demonstrated that “specific bioactive products from the cytochrome P450 (CYP) pathway, a major family of enzymes, can influence CNV and vascular leakage by changing how immune cells are recruited to areas of disease and injury,” lead author Eiichi Hasegawa said. “Specifically, we isolated and characterized two key mediators of disease resolution generated from the CYP pathway: 17,18-epoxyeicosatetraenoic acid (EEQ) and 19,20-epoxydocosapentaenoic acid (EDP). “

“Our study offers new insights into bioactive lipid metabolites as regulators of systemic inflammatory immune cells and mediators in CNV resolution,” Connor said, noting that current treatments for AMD do not fully address the underlying causes of this disease. “Given the high prevalence and progressive nature of neovascular eye disease, the ability to stabilize bioactive lipids that mitigate or halt disease is of great and increasing therapeutic significance. It is our hope that emerging technologies and future studies will expand on our work and ultimately lead to safe, targeted, and cost-effective therapies that markedly improve visual outcomes and quality of life for patients suffering from these debilitating ocular diseases.”

Said co-author Kin Sing Stephen "Sing" Lee, who worked on the initial enzyme project as a postdoctoral researcher in the Hammock lab at UC Davis, and is now an assistant professor of pharmacology and toxicology at Michigan State University: “It was so exciting at UC Davis to be involved with basic research on inflammation but also see the compounds that I made moving to human clinical trials with the hope of treating pain and inflammatory diseases such as AMD. It was also a thrill to develop collaborations with scientists throughout the world like Eiichi Hasegawa and Kip Connor

The research was supported in part by the NIH NIEHS, Research to Prevent Blindness, Massachusetts Lion Eye Research Fund, BrightFocus Foundation, Harvard Department of Opthalmology and Massachusetts Eye and Ear Infirmary; the Japan Society for the Promotion of Science Postdoctoral Fellowships for Research Abroad; the Robert A. Welch Foundation, and by a scholar award and a medical student fellowship grant. (Follow the Connor lab on Twitter @ConnorLab and the Bruce Hammock lab on Facebook at https://www.facebook.com/hammocklab/) 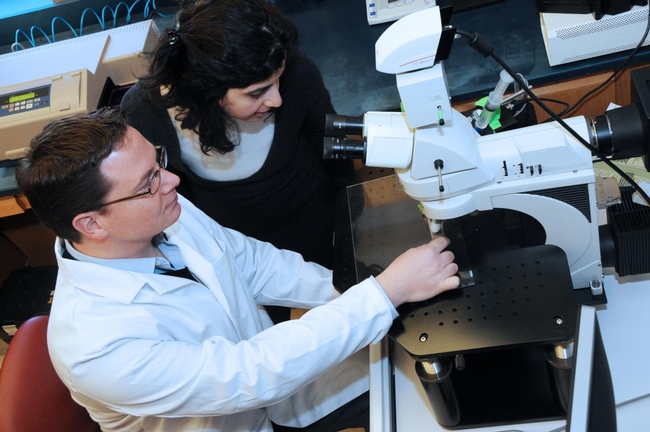