Frank Zalom, distinguished professor of entomology at UC Davis, receives his lifetime achievement award from Janet Hurley, the 2018 IPM Symposium Awards Committee. She is affiliated with Texas A&M University/AgriLife Extension. In back is George Norton, recipient of a lifetime achievement award in 2015. (Photo by Lena McBean, Remsberg Inc.)
Integrated pest management (IPM) scientists affiliated with the University of California, Davis and the UC Agriculture and Natural Resources received high accolades at the 9th International IPM Symposium, held March 19-22 in Baltimore.

Officials lauded the honorees with these tributes:

"Frank Zalom began his career as an assistant professor for the Department. of Entomology, Fisheries, and Wildlife at University of Minnesota, St. Paul, in 1979. Over the years his career has spanned a wide range of positions and leadership to IPM programs worldwide.  In 1986, he became the director of UC Statewide IPM Program and directed it for 16 years to raise the UC IPM program to its 'gold standard' of IPM information in the world. He received a Joint Resolution from the California State Legislature lauding his efforts to advance IPM.

"He believes that advancing the science and implementation of IPM will reduce the impact of pests and pest control on agriculture and the environment. This is critical in California. 'California agriculture is a $42.6 billion industry that generates at least $100 billion in related economic industry,' according to the California Department of Food and Agriculture, and California grows more than a third of the country's vegetables and two-thirds of the nation's fruits and nuts. Pete Goodell (right), Cooperative Extension adviser emeritus, receives his lifetime achievement award plaque from presenter Megha N. Parajulee, Texas A&M AgriLife Research. (Photo by Lena McBean, Remsberg Inc.)
"Peter Goodell was hired as an Area IPM Specialist in 1981. With Goodell's leadership, UC Statewide IPM Program (UC IPM) has developed into a well-known and respected resource for practical IPM information. During Goodell's  career, IPM moved from a fringe concept for insect pest management to a central tenet of management for all pests in all situations. All the while, he has continued to push the boundaries of IPM.  Goodell was the principal investigator and subject-matter expert in a report to the California Department of Pesticide Regulation on the use of chlorpyrifos against key pests in almonds, alfalfa, citrus and cotton.

"Early in his career, Goodell focused on reduction of use of broad-spectrum insecticides and development of easy to implement scouting methods. For example, he was instrumental in the development and adoption of time saving presence/absence sampling for mites in cotton. Mid-career, Goodell helped to pioneer year-round IPM programs because of his collaborations with the Natural Resources Conservation Service. Year-round IPM programs describe pest management activities important for that crop stage or season and addresses key pest management for multiple pests. This departed from addressing one pest to a more holistic program focused on prevention and decision-making. UC IPM now has year-round programs for 25 crops and recently expanded the concept to develop seasonal landscape IPM checklists for four eco-regions in California. Later, Goodell was one of the first to incorporate social science concepts regarding the drivers of change in behavior into IPM learning and adoption. He was a founding member of the group that developed the Toolkit for Assessing IPM Outcomes and Impacts.

"To end his career, Goodell is leading a California Department of Pesticide Regulation (DPR) funded project to host discussions on pests, pesticides, and IPM broadly throughout California. At the foundation for this project, it assumes that pests are part of every persons' experience and pest management is necessary to protect society. The hope is the project will generate a consensus statement about risks from pests and pesticides and provide direction for the future of IPM in California. That will be an incredible final accomplishment for Dr. Goodell's career and for IPM everywhere." (See more about his career on the UC ANR website.) "The European Grapevine Moth Team was selected for an IPM Team Award for achieving the eradication of European grapevine moth only six years after its discovery in 2009. Team members helped growers in infested counties to monitor the pest and apply control measures on a timely basis. The team's research and extension efforts helped growers avoid losses to the pest every year until it was finally eradicated in 2016.

"The team mounted a multi-pronged program to study the biology and life cycle under California conditions, assisted and informed growers to monitor and control this pest, and addressed regulatory questions regarding detection and delimitation. The team designed and conducted 15 trials to evaluate winter mortality factors, validate monitoring tools, determine the host range, evaluate organic and conventional insecticides, and study larval mortality during the winemaking process." 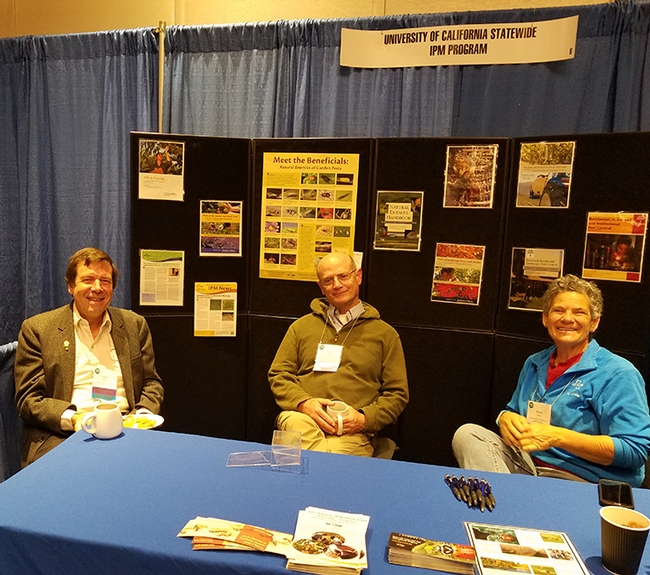 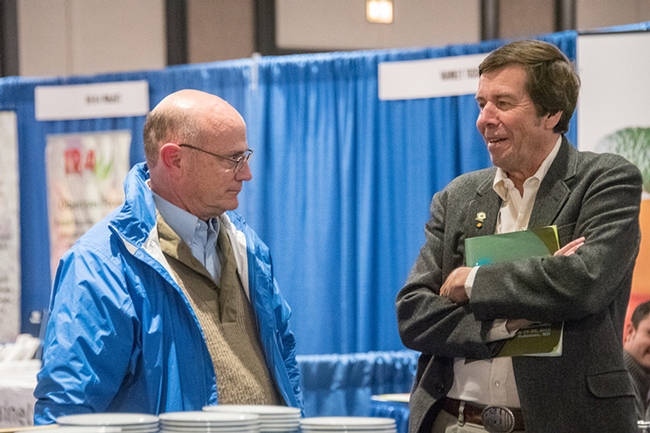