All those interested can tune in--just click on the link, said Williams. "To access the talk, you do not need an account, but you will need to install zoom ahead of time. Use the link to join the meeting."

"Out of respect for the speaker, during the talk please keep your microphone muted, video off, and avoid using the chat feature," he added. "We will invite questions at the end."

Winfree says the goal of her research program is to understand the role of biodiversity in ecosystem services in the real world--that is, in large-scale and unmanipulated systems. We are developing a framework for thinking about this question that bridges the gap between smaller-scale experiments and the associated theory, which ecologists understand well, to the more complicated reality of nature. What is the most meaningful way to measure biodiversity in nature, and is the answer scale-dependent? Do we need to preserve biodiversity in order to maintain ecosystem services, or are only a few dominant species sufficient? What is the role of rare species in ecosystem services? Can we extend biodiversity-ecosystem function research to mutualist networks? These are some of our current questions."

As collaborators, Winfree and Williams recently published “Species Turnover Promotes the Importance of Bee Diversity for Crop Pollination at Regional Scales,” in the journal Science. They set out to answer the question: "How many wild bee species do we need to pollinate our crops?"

The answer, briefly: "Not nearly enough bees are available for crop pollination."

The UC Davis Department of Entomology and Nematology seminars, coordinated by community ecologist and assistant professor Rachael Vannette, are all virtual.  Some have been cancelled and others postponed. See schedule. Professor Rachael Winfree of Rutgers led the research. (Rutgers University Photo)
In a study that highlights the role of bee diversity in crop pollination, researchers found that growers may benefit from 10 times the number of bee species than previously thought to pollinate their crops, according to a paper published Feb. 15 in the journal Science by a team of six ecologists from multiple institutions, including Professor Neal Williams of the University of California, Davis.

The researchers, led by Rachael Winfree of Rutgers University, New Brunswick, N.J. set out to answer the question “How many species do we need for crop pollination?”

They identified more than 100 species of wild bees pollinating watermelon, cranberry and blueberry crops on a total of 48 farms in New Jersey and Pennsylvania--the mid-Atlantic region of the United States.

The answer: “Not nearly enough bees are available for crop pollination,” Winfree said.

“We found that maintaining ecosystem services in nature requires many species, including relatively rare ones,” said Winfree, professor of ecology, evolution and natural  resources. The publication, “Species Turnover Promotes the Importance of Bee Diversity for Crop Pollination at Regional Scales,” appears in the section, Ecology. UC Davis Professor Neal Williams was part of the research team. (Photo by Kathy Keatley Garvey)
“Bees and other pollinators are critical for the pollination of crops and wild plants around the world and protecting them has become a major concern,” Williams said. “A considerable amount of past research has shown that having multiple species improves pollination of many crops; that is pollinator biodiversity benefits crop pollination in many cases.”

“So how many species do we need to ensure reliable crop pollination?” he asked. “The answer to this question helps us manage our agricultural and natural lands.  Past studies suggest that often just a few bee species can do the job for any one site.”

The study, among the first of its kind, “reveals that when we look across multiple farm sites in a region, we need many more species than experimental studies have suggested in the past,” Williams said. “At one farm, pollination might rely on a handful of species, but across 40-50 farms in a region we need 10 times that number. This is because the most important species change from one place to another. “

So how many bee species are important to ensure crop pollination?

“More than we thought!” Williams said. “Working to promote bee diversity across regions is important for maintaining pollination and secure food systems.”  The researchers counted 100 species of wild bees.

Winfree said previous experiments completed in the lab didn't answer the question: “How many bees do we really need?”

“When you have five (ish) bee species you get enough pollination,” she said “But there are only so many species you can even fit in an experiment. What we wanted to know is, how many bees do real farmers need to pollinate actual farms across an entire state?”

“Any one farm might need only a few species, but different bee species pollinate the different farms, so to pollinate all 50 (ish) farms we needed about 10 times as many species as are needed in smaller scale experiments,” Winfree said. “More than half of the 100 (ish) bee species we saw in the study were needed at some farm for some crop.”

Winfree, reiterating that “we need more bees than we thought,” said the issue is “important because many scientists are concerned that bees are in trouble. There is limited information on how most bee species are doing, but some of the species we do know about are declining. This work shows that preserving lots of bee species is important for food security.”

Williams said that "similar patterns likely apply in California, where we have shown benefits of wild bee diversity for watermelon, sunflower and almond pollination. That said, our landscapes differ and we ought to be considering it here in California, too.".
What's the next step?
"In practice, continuing to think about and approach pollinator diversity and pollinator health as a regional undertaking as well as at single sites," Williams said.

A grant from the National Institute of Food and Agriculture (NIFA) of the U.S. Department of Agriculture funded the data collection research. Winfree conceived the study, oversaw the data collection, led the conceptual development and wrote the manuscript. Williams contributed to the conceptual development and manuscript preparation. 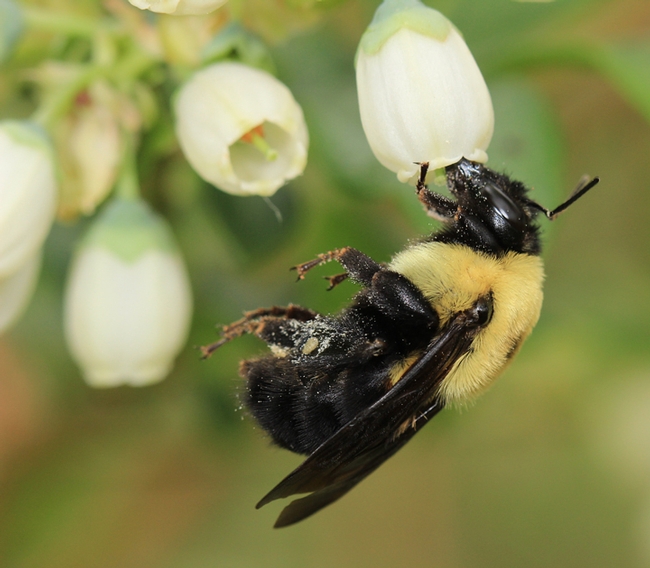