Robbin Thorp by an almond tree on Bee Biology Road, UC Davis. (Photo by Kathy Keatley Garvey)
Colleagues, researchers and former students of Robbin Thorp, UC Davis distinguished emeritus professor of entomology and a global authority on bees, paid tribute to him and his work at a special symposium in his honor at the 2019 meeting of the Pacific Branch, Entomological Society of America in San Diego.

“He received what is perhaps the greatest honor one can receive from close colleagues, a special symposium honoring him and his contributions to the field of bee biology and pollination,” said coordinator and pollination ecologist Neal William,  professor of entomology, UC Davis Department of Entomology and Nematology. Several of the leading bee biologists in western North America assisted with the symposium.

“It was known as The Robbin Symposium and colleagues old and new gathered the hear a supercharged line up present current research that has been directly impacted by Robbin Thorp,” Williams said. "We designed the symposium to honor the impact of Dr. Thorp, on the field of bee biology and conservation, but at the same time present innovative research that brings together bee and pollination biology researchers."

The symposium featured scientific contributions from leaders in the fields of bee ecology, conservation and pollination, all who worked with or were influenced by Thorp:

Hatfield, a senior conservation biologist with Xerces' Endangered Species Program  presented him with a drawing of Bombus franklini, the work of artist April Coppini of Portland, Ore. An authority on Franklin's bumble bee,  Thorp has monitored the bumble bee population since 1998 in its narrow distribution range of southern Oregon and northern California. He has not seen it since 2006 and it is feared extinct. In August of 2016 a documentary crew from CNN, headed by John Sutter followed him to a meadow where Thorp last saw Franklin's bumble bee. He wrote about Thorp, then 82, in a piece he called "The Old Man and the Bee," a spinoff of Ernest Hemingway's "The Old Man and the Sea." (See more on Franklin's bumble bee at https://xerces.org/franklins-bumble-bee/) Robbin Thorp, distinguished emeritus professor of entomology, with two books he co-authored in 2014. (Photo by Kathy Keatley Garvey)
Thorp was instrumental in placing the bumble bee on the Red List of Threatened Species of the International Union for Conservation of Nature and Natural Resources (IUCN). Long active in the North America IUCN Bumblebee Specialist Group, Thorp served as its regional co-chair, beginning in 2011.

“Robbin has done so much for me over the years,” Hatfield said. “I'm pleased to give back even a small fraction.” Hatfield blogged about him during Earth Week. https://xerces.org/2019/04/24/robbin-thorp-earth-week/.

At the social event that followed, attendees shared their gratitude with Thorp "for his lifetime of work, mentoring and friendship,” Williams said.

"It was great to see Robbin interacting and enjoying the conference and the company," Frankie said. "We all have learned much from him over the years, and this was a good occasion to say thanks and acknowledge Robbin's many contributions."

Thorp, a member of the UC Davis entomology faculty for 30 years, from 1964-1994, achieved emeritus status in 1994 but has continued to engage in research, teaching and public service. In his retirement, he co-authored two books Bumble Bees of North America: An Identification Guide (Princeton University, 2014) and California Bees and Blooms: A Guide for Gardeners and Naturalists (Heyday, 2014).

A tireless advocate of pollinator species protection and conservation, Thorp is known for his expertise, dedication and passion in protecting native pollinators, especially bumble bees, and for his teaching, research and public service. He is an authority on pollination ecology, ecology and systematics of honey bees, bumble bees, vernal pool bees, conservation of bees, contribution of native bees to crop pollination, and bees of urban gardens and agricultural landscapes. He is active in research projects and open houses at the Bohart Museum of Entomology. Robbin Thorp at his computer showing Bombus franklini, an endangered bumble bee feared extinct. (Photo by Kathy Keatley Garvey)
Thorp received his bachelor of science degree in zoology (1955) and his master's degree in zoology (1957) from the University of Michigan, Ann Arbor. He earned his doctorate in entomology in 1964 from UC Berkeley, the same year he joined the UC Davis entomology faculty. He taught courses from 1970 to 2006 on insect classification, general entomology, natural history of insects, field entomology, California insect diversity, and pollination ecology.

Every summer from 2002 to 2018, Thorp volunteered his time and expertise to teach at The Bee Course, an annual workshop sponsored by the American Museum of Natural History and held at the Southwestern Research Station, Portal, Ariz. The intensive 9-day workshop, considered the world's premiere native bee biology and taxonomic course, is geared for conservation biologists, pollination ecologists and other biologists who want to gain greater knowledge of the systematics and biology of bees.

Thorp was named a fellow of the California Academy of Sciences, San Francisco in 1986; recipient of the Edward A. Dickson Emeriti Professorship of UC Davis in 2010; and recipient of the UC Davis Distinguished Emeritus Award in 2015. Other honors include: member of the UC Davis Bee Team that won PBESA's Team Award in 2013. In addition, he is a past president (2010-2011) of the Davis Botanical Society, and former chair (1992-2011) of the Advisory Committee for the Jepson Prairie Reserve, UC Davis/Natural Reserve System.

In a letter of support for his nomination as distinguished emeritus professor,Kremen wrote:

"I have had the privilege of working with Dr. Thorp as a close colleague since 1999. I can definitely say that without his contributions, I could never have developed as extensive and impactful a research program on pollinator conservation and pollination services. It is even more noteworthy that Dr. Thorp's contributions to this research program have all occurred since his  'retirement'– he has had a very active retirement indeed."

"Dr. Thorp has contributed in three main ways. First, he has provided expert input into the design of protocols for the research, including assays for pollinator effectiveness, developing citizen science methods, rearing experimental bumble bee colonies, monitoring bumble bee colony properties in the field, and developing pollinator survey methods. Second, he has provided expert taxonomic services, including personally identifying over 100,000 native bee specimens that we have collected during this work, and working with us to develop a bee traits database. Third, he has trained numerous field assistants and graduate students from my lab in different aspects of bee biology. He's spent long hours with many of my graduate students helping them learn to identify bees. He also helped us develop methods and information sheets for teaching field and lab teams to recognize key generic and family characters for identifying bees in the field and sorting them in the lab. He's advised many of my graduate students on different aspects of their work.

"Collectively, Dr.Thorp's contributions have impacted 35 publications that have emerged from this research program to date, with many more either submitted or nearing the submission stage. He has also been a co-author on a number of these publications. Not only has Dr. Thorp had such a significant effect on the work of my lab, but he conducts his own primary work documenting the status of rare bumble bee species like Bombus franklini and B.occidentalis and contributes at a similar level to other research labs such as with his long-time collaborators Dr. Gordon Frankie and Dr. Neal Williams. It's really quite amazing how he manages to do it all."

"He also teaches regularly in The Bee Course, a field course held in Arizona each year by the American Museum of Natural History, frequently gives talks and workshops that educate our state agencies and the public about the importance of pollinators, and works with conservation organizations like the Xerces Society to promote pollinator conservation."

In another letter of support, Ullmann, director of the UC Davis Student Farm, Agricultural Sustainability Institute, who received her doctorate in entomology from UC Davis,  wrote:

"I met Robbin Thorp in 2007 and assumed that he was an active professor because of his continued contribution to the field of entomology, teaching activities, publishing in peer-reviewed journals and vocal support of pollinator conservation efforts. For these reason I considered asking if I could join his lab. I remember telling someone my plan and they said 'That probably won't work. Robbin is retired.' He does so much in the field of pollination ecology that I didn't even realize he was retired.

"Since then I've had the privilege of interacting with Robbin as a field technician, a graduate student in the Department of Entomology at UC Davis, a student at The Bee Course, a co-presenter at a bee identification course for US Forest Service staff, and as a co-author on a peer-reviewed paper. The entire time that I've known Robbin I've been impressed with (1) his depth and breadth of knowledge about bees and crop pollination, (2) his willingness to share what he knows, and (3) how approachable he is. It doesn't matter if you're a MacArthur Genius or a field technician just learning about bees, Robbin always makes time to talk with you and answer your questions.

"Robbin is one of the few people in North America who can identify bees down to the species level. As a result he's in high demand and has identified thousands of specimens for numerous lab groups since his retirement. However, he doesn't just identify the specimens. Instead, he's willing to patiently work through dichotomous keys with you so that you can learn those skills." 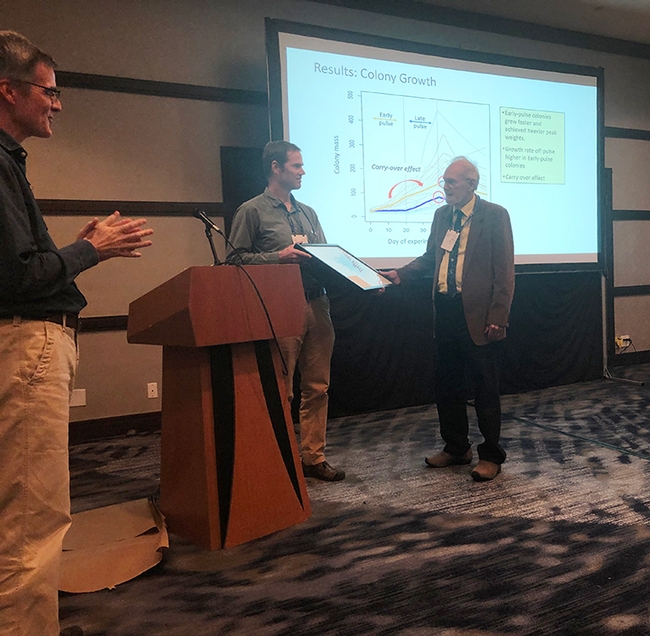 Rich Hatfield of the Xerces Society of Invertebrate Conservation presents an illustration of Franklin's bumble bee to Robbin Thorp. It is the work of April Coppini of Portland, Ore. (Photo by Clare Kremen) 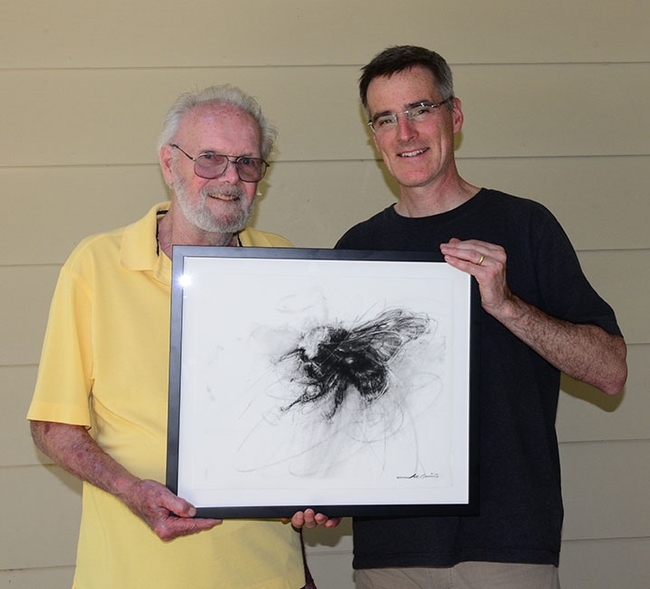