Sandra "Sandy" Vice, financial analyst/supervisor with the UC Davis Department of Plant Pathology and Department of Entomology and Nematology, has just completed the seven-month “UC Davis Administrative Officers for the Future” (AOFTF) Program.

Vice received a certificate, signed by Chancellor Linda Katehi and presented by the chancellor and Provost/Executive Vice Chancellor Ralph Hexter, at a ceremony held recently in the UC Davis Conference Center.

The only participant from the College of Agricultural and Environmental Sciences, Vice was one of 18 UC Davis-campus staff enrolled in the program, who were selected from a pool of 47. Also chosen were 12 from the UC Davis Health System.

The AOFTE program took place  Oct. 1 to April 22 and involved 16 hours a month. It also included some 40 to 60 hours of “home work,” involving individual work and group projects. Vice was assigned to a group researching disability awareness. They teamed to present a Powerpoint to the entire group and special guests. “The objective was to improve the climate of disability among staff,” she said.

Among the other topics they pursued were personal branding, strategic planning, leadership, and management tools. Guest speakers included a number of UC Davis and UC Davis Health System administrators.

Vice joined the UC Davis workforce in January of 1995, when she accepted a purchasing position with the Center for Engineering Plants for Resistance Against Pathogens. She advanced to account manager and then joined  Plant Pathology as an account manager.

“Eventually I would like to apply for a CAO (chief administrative officer) post,” Vice said. She also plans to enroll in more leadership and management classes.

A graduate of Vacaville High School, Vice studied business at Solano and Mira Costa community colleges. She and her family, husband James, and son, Luke, 15, reside in Winters. Another son, James, resides in the Bay Area. 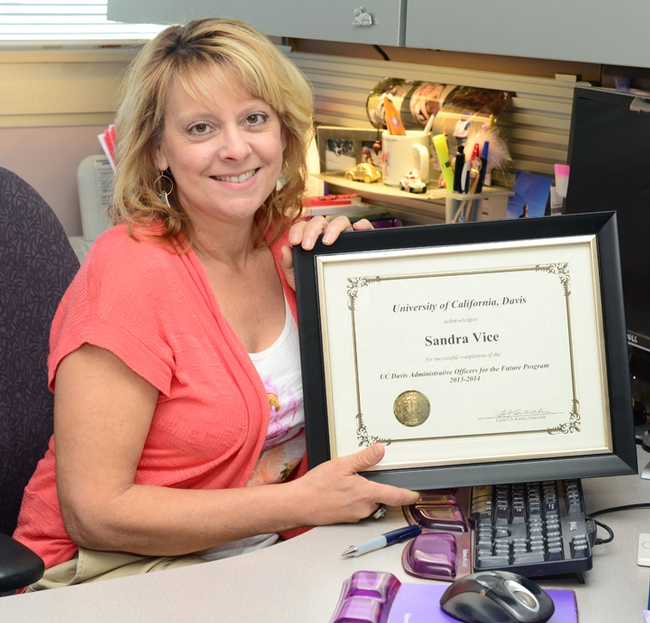