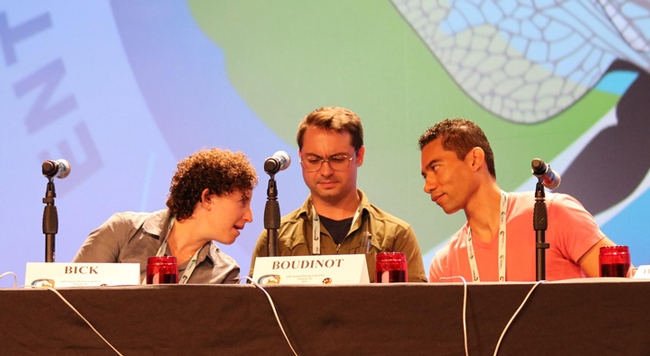 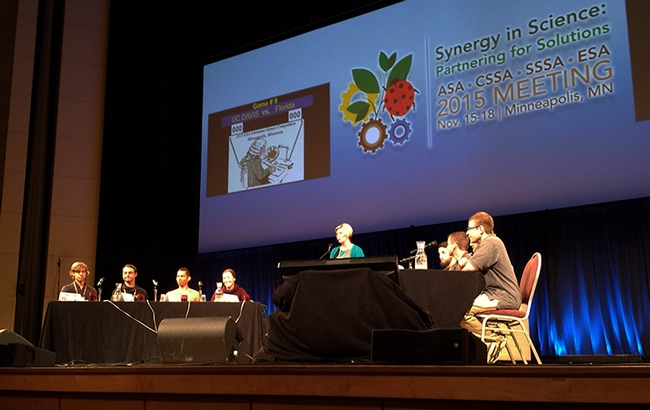 Ralph Washington (left) of the UC Davis Linnaean Team correctly answers a question during the competition with Ohio State. At right is Andrew Merwin
DAVIS--What's the loudest insect in the world? What is the egg case of a cockroach called? Kissing bugs, in the family Reduviidae, are vectors of what disease? About how long have insects been on earth? Give three official common names for Helicoverpa zea.

Those were some of the questions asked at the 2010 Linnaean Games, a college-bowl type game zeroing in on insects, entomologists and entomological facts. Graduate students from throughout the country compete on teams to determine the championship team

The team from the University of California, Davis, narrowly lost to Ohio State University, which advanced to the finals and then went on to win the championship. The event took place at the Entomological Society of America's 58th annual meeting in San Diego. In the UC Davis-Ohio State competition, the score was tied at 90 to 90 before Ohio State answered the next question correctly and went on to win the game. Ohio advanced to the championship game and defeated the University of Nebraska.
During the close competition, the Davis team tied Ohio several times. Finally, with the score knotted at 90-90, the Ohio team edged UC Davis.

One of the questions asked of Ohio State-Nebraska in the finals was “Name the individual who received the Entomological Foundation Award for Excellence in Integrated Pest Management.” Neither Ohio State nor Nebraska knew the answer, but UC Davis did. The answer: Frank Zalom, professor of entomology and an IPM specialist at UC Davis.

Tom Turpin of Purdue emceed the program as a trio of judges--J. E. McPherson of Southern Illinois University, Carol Annelli of Washington State University and Susan Weller of the University of Minnesota--scored the answers.

Each branch sponsors a competition and usually sends two to the nationals. Teams and their sponsoring ESA branch:

Eastern Branch: Pennsylvania State University (University of Maryland was also selected but did not participate)

Answers to the above questions.

Question:
What's the loudest insect in the world?
Answer:
African cicada (Brevisana brevis); it has been measured at 106 decibels, equivalent to a gas mower at 3 feet away.

Question:
What is the egg case of a cockroach called?
Answer:
Ootheca.

Question:
Kissing bugs, in the family Reduviidae, are vectors of what disease?
Answer:
Chagas disease

Question:
About how long have insects been on earth?
Answer:
Some 400-380 million years ago. Here are some of the other questions asked at the Linnaean Games:

Question:
Which sexes of cicadas have tymbals and which have tympana?
Answer:
Males have both. Females have only tympana.

Question:
What term is used to describe the antennae found on male mosquitoes?
Answer:
Plumrose

Question:
Crickets are well-known music makers. What are the names of the two specialized structures that allow them to make that wonderful noise and where specifically on the body are they located?
Answer:
File and scraper, located on the forewings.

Question:
At what American school was the first entomology class taught and who was the teacher?
Answer:
Harvard (1805-1822) W.D. Peck

Question:
In the Amazon rain forest, what are the common names of two groups of insects that make up about 1/3 of the biomass of all animals in the habitat?
Answer:
Ants and termites.

Question:
Problems with honey bee hives in what state led to the recognition of colony collapse disorder?
Answer:
Pennsylvania

Question:
The monarch is actually the second-most popular state insect. What insect is the most frequently adopted state insect?
Answer:
Honey bee.

Question:
Robert Frost wrote a poem that begins with the lines: “An ant on a table cloth ran into a dormant moth of many times his size.” As you might guess the poem is about ants. What is the title of the poem?
Answer:
Departmental