Zalom said it was a great honor to receive the award. "Perry Lee Adkisson is among the icons of integrated pest management (IPM)," he said, "and one of the people that I have most looked up to since starting my career in entomology."

Adkisson, chancellor emeritus of the Texas A&M University System and a distinguished professor, now emeritus, at Texas A&M, was the first-ever recipient of all three of the world's major prizes in agriculture: the Alexander von Humboldt Award, the Wolf Prize, and the World Food Prize. He and colleague Ray Smith are credited with developing integrated pest management (IPM).

Both Zalom and Adkisson are past presidents of the Entomological Society of America (ESA) and both are fellows.

Known nationally and globally for his IPM leadership, Zalom co-chaired the Association of Public and Land Grant Universities' National IPM Committee (NIPMCC) from 1999-2015. He also has served as an IPM representative to the Experiment Station Committee on Organization and Policy (ESCOP) Science and Technology Committee since 2003, USDA Western Region IPM Competitive Grants program manager for 10 years, and on the United States Agency for International Development (USAID) Board of Directors for the IPM CRSP (Collaborative Research Support Programs) from 2001-2005.

Highly honored by his peers, Zalom is an elected fellow of four scientific organizations: ESA, American Association for the Advancement of Science, Royal Entomological Society (London) and the California Academy of Sciences.  He is a past president of the Pacific Branch of ESA. He continues to serve as a member of the Entomological Foundation's Board of Directors and the ESA's Science Policy Committee.

Zalom has authored more than 335 peer-reviewed journal articles, book chapters, and books, and has served as major professor for 12 Ph.D. students and seven master's students. 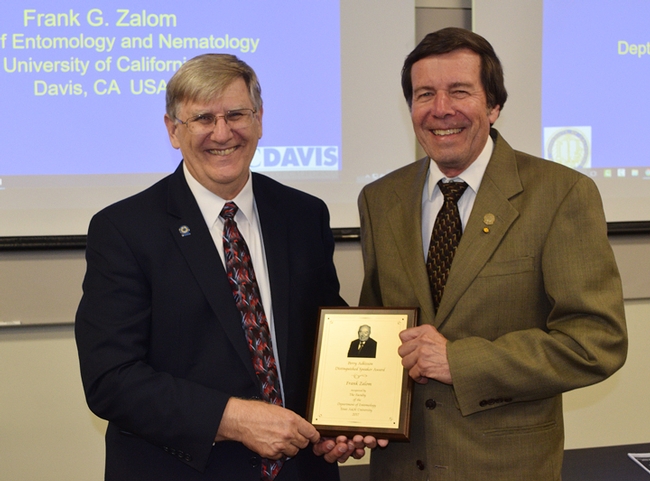 Yes, it does, says UC Davis agricultural entomologist Christian Nansen of the Department of Entomology and Nematology, who set out to investigate whether there's a relationship between the “physiological” and “behavioral” resistance in insects and found “some quite interesting patterns.”

In a first-of-its-kind research, published March 4 in the Public Library of Science (PLOS), Nansen and his colleagues discovered that “certainly there was an effect of level of physiological resistance or susceptibility of moth strains” – this they demonstrated by comparing two moth strains with high and low levels of insecticide resistance. But they also found intriguing differences in life stages.  “We found that ovipositing females and developing larvae may not show the same levels of behavioral responses to insecticides.”

“This is all very interesting and clearly links theoretical evolutionary biology with applied pest management,” he said, concluding that “behavioral avoidance ought to be considered in evaluating the performance of an insecticide.”

The research, “Behavioral Avoidance—Will Physiological Insecticide Resistance Level of Insect Strains Affect their Oviposition and Movement Responses,” by Christian Nansen and fellow scientists Maria Nansen of UC Davis and Olivier Baissac, Kevin Powis and Greg Baker, all of Australia, targeted the Brassica pest, Plutella xylostella, commonly known as “the cabbage moth.” It is responsible for an estimated $4 to $5 billion loss annually in the United States, Nansen said. Cole crops are the moth's host plant. It lays its eggs only on the family Brassicaceae. Its larvae or caterpillars feed on the leaves, floral stalks and flower buds.

The main objective of the Christian Nansen-led study was to quantify two possible types of behavioral avoidance:

“As a model system, we studied movement and oviposition responses by two strains of DBM denoted ‘single resistance' and ‘double resistance' based on their levels of physiological resistance to two insecticides: gamma-cyhalothrin and spinetoram,” they wrote.

The researchers compared behavioral responses by these two strains as part of characterizing the relative effect of levels of physiological resistance on the likelihood of insects showing signs of behavioral avoidance.

“Although we are unaware of any theoretical framework providing clear predictions of expected behavioral responses by phenotypes with different of physiological resistance,"  Nansen said, "we predicted that: (1) DBM individuals with confirmed physiological resistance to a given combination of dosage and insecticide show similar movement and oviposition responses to host plant surfaces with/without insecticides, and (2) DBM individuals should avoid insecticide treated surfaces and show significant changes in movement and oviposition behavior, if they are exposed to a combination of dosage and insecticide to which they are susceptible.”

Nansen said the study “highlights the possibility of associations between physiological resistance and avoidance responses by ovipositing females. In addition, larvae from the single resistance strain moved significant faster than those from the double resistance strain, when the entire arena was treated with either gamma-cyhalothrin or spinetoram.”

"Our study highlights the importance of conducting behavioral studies as part of characterizing effects of selective pressures by insecticides and as part of performance evaluations of insecticides.”

The diamondback moth, thought to be of European origin, is found throughout the Americas and in Europe, Asia, Africa, Australia, New Zealand and the Hawaiian Islands. It was first observed in North America in 1854 in Illinois and by 1883 had spread to Florida and the Rocky Mountains, data shows.

The diamondback moth was the first insect found to have become resistant to biological control by the Bt toxin (from Bacillus thuringiensis) in the field. In the 1980s, the moth developed resistance to pyrethroids, and today, virtually all insecticides are ineffective, entomologists say. 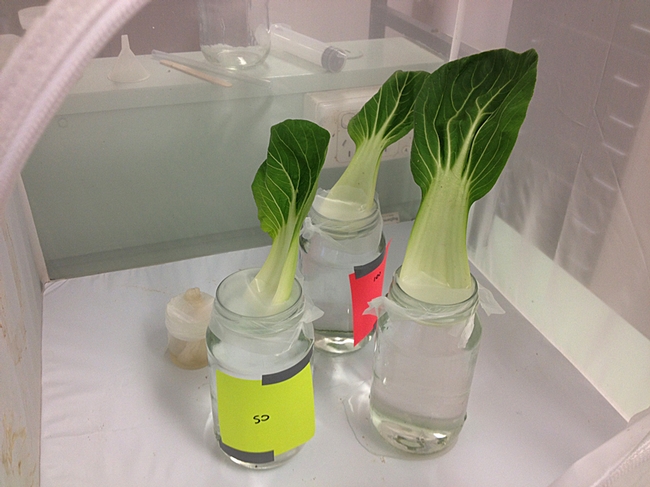 This image: three cabbage leaves in a cage and ovipositing female moths having a choice between them. (Photo by Christian Nansen) 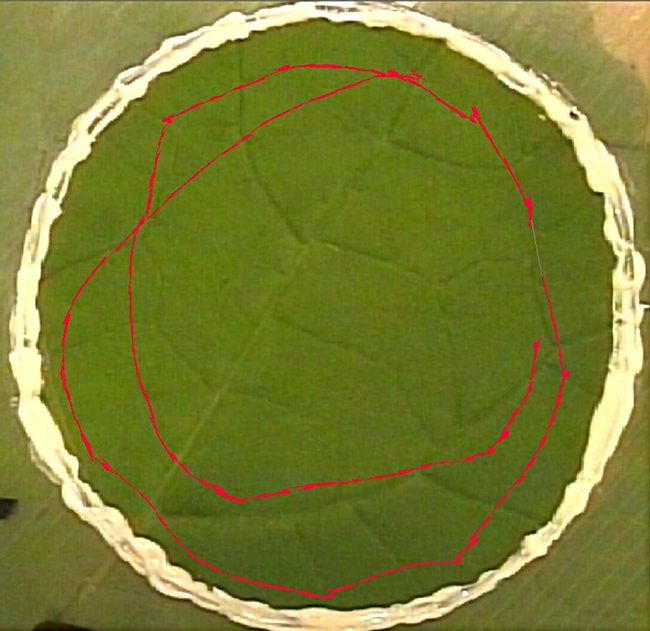