Elvira de Lange, corresponding author of the newly published paper who assembled the team of authors. (Photo by Kathy Keatley Garvey)
Sustainable agricultural practices in the 21st century should increasingly depend on drones and other innovative technologies, says an international team of scientists, including UC Davis entomologist Elvira de Lange, in a newly published article in the Journal of Economic Entomology.

The review paper, “Drones: Innovative Technology for Use in Precision Pest Management,” is one of the first of its kind to summarize scientific literature on the use of agricultural drones for pest management.

In advocating the need for more research, the authors said that drones are becoming an important part of precision pest management, from detecting pests to controlling them.

“We propose extensive communication and collaboration between scientists from various disciplines, extension agents, industry professionals, and commercial growers to reach drones' optimal potential to help with pest management and control,” said De Lange, the corresponding author and a postdoctoral fellow in the Christian Nansen lab, UC Davis Department of Entomology and Nematology who assembled the team of authors.

The paper covers the use of drones with remote sensing equipment, to detect pest problems from the air. It calls for the increased use of actuation drones, to provide solutions such as spraying pesticides and releasing biocontrol organisms.

"Drones became indispensable for IPM programs in Brazil, specially for Biological Control," said lead author and entomologist Fernando Iost Filho of the Department of Entomology and Acarology, University of Sao Paulo, Brazil. "They are currently being used for releasing parasitoids in thousands of acres of field crops, such as sugarcane and soybean,
said Filho, a former exchange student at UC Davis. "Their use for monitoring crop health is also expected to increase in the Brazilian fields in the next few years." “Remote sensing equipment,” she added, “can also be placed on manned aircraft and satellites. However, drones fly lower, increasing images' spatial resolution, and making clouds less of an issue. They are generally cheaper and can be flown more frequently. Compared to ground-based devices, drones can cover much more ground in a shorter period of time.” 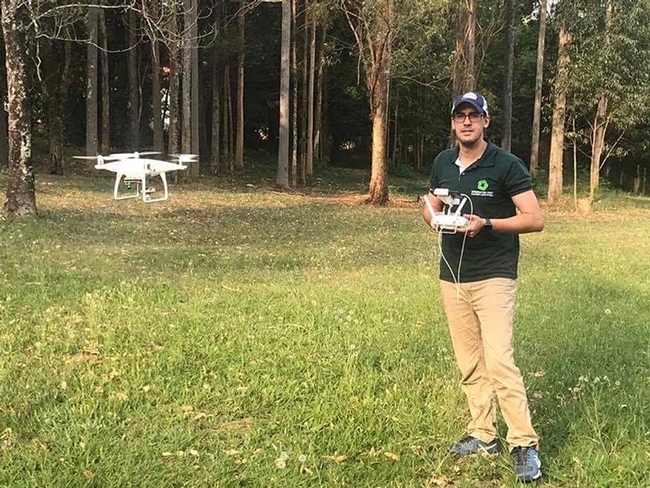 Chemical ecologist Elvira Simone de Lange, a postdoctoral researcher in the Christian Nansen lab, UC Davis Department of Entomology and Nematology, has received a three-year $249,878 federal grant that involves using drones to detect the early infestation of spider mites, and then targeting the pests with biocontrol agents.

The grant is from the U.S. Department of Agriculture's Western Sustainable Agriculture Research and Education (SARE) Program.

In her successfully funded proposal, she noted that “Farmers are requesting in-depth testing of how UAS can be integrated successfully into strawberry production to improve management practices.” UAS, or drones, can monitor large areas in a short period of time. California produces 88 percent of the nation's strawberries, with an annual value of approximately $2.6 billion. Twospotted spider mite, a pest. (Photo by Elvira de Lange)
“Little is known about the spatio-temporal dynamics of spider mites in strawberry, and consequently, about the optimal timing to release predatory mites, their natural enemies,” de Lange wrote in the proposal. Predatory mites are widely used in the strawberry industry, but they may succumb within days in the absence of prey. “With this study, a collaboration between scientists, extension experts, and commercial growers, we will demonstrate that airborne remote sensing can be used to detect spider mite hotspots and therefore pinpoint when and where predatory mite releases are needed.”

The three-year project, now underway through March 2020, also explores the use of drones as a novel, effective way of distributing the predatory mites.

The grant also calls for educational outreach programs, with hands-on workshops and lectures on spider mite sampling at grower and agriculture professional meetings throughout the California strawberry growing region. Growers outside this area will be reached through publications in trade journals and other grower media. This predatory mite is a biocontrol agent of spider mites. (Photo by Elvira de Lange)
In addition, de Lange will organize a panel discussion on the potential of UAS in strawberry management and beyond. “Both the educational outreach and research outcomes are easily transferable to strawberry growing regions elsewhere, and could be expanded to include monitoring for other pests and pathogens,” she said, adding that the project will enhance efficacy of biocontrol agents and reduce dependence on miticides, enhancing sustainability of spider mite management practices in strawberry.”

The mites suck plant juices. The damage can result in decreased fruit size and yield. Mite-feeding symptoms include dense webbing, and dry, brittle and discolored leaves.

“Twospotted spider mite feeding is particularly damaging during the first two to five months following transplanting in late summer or fall,” according to the PMG.

A native of The Netherlands, de Lange joined the Nansen lab in March 2016. She received her bachelor's degree in biology, and her master's degree in plant biology from Utrecht University, The Netherlands. She earned her doctorate in chemical ecology from the University of Neuchâtel, Switzerland. Her first postdoctoral position was at Rutgers University, New Jersey, where she worked on insect resistance in cranberries.

Overall, she hopes her research meshing chemical ecology, entomology, plant-arthropod interactions and biological control in the fields of integrated pest management and precision agriculture solutions, will “lead to the development of novel, sustainable pest management practices.” 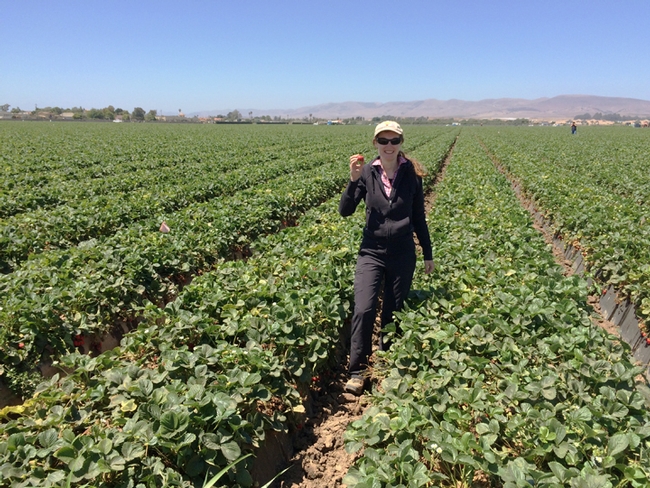 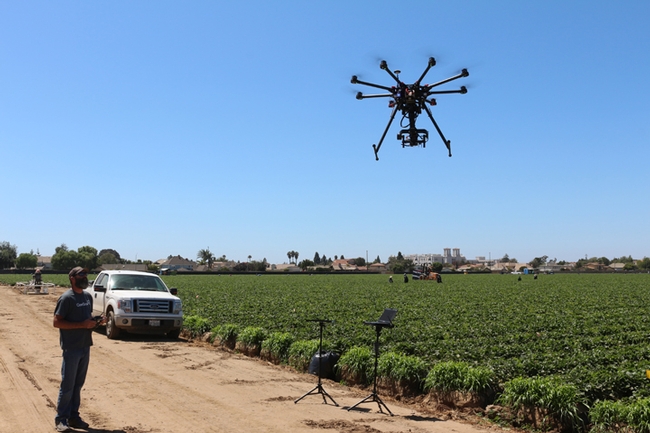