Entomology & Nematology News
sitenum=270
UC News about Entomology and Nematology.
Lacie Newton’s Research on Folding-Door Spiders and 'Where Do You Draw the Line?'
Published on: July 31, 2020 UC Davis doctoral student Lacie Newton has just published a journal article on folding-door spiders.
Where do you draw the line or species boundaries between what defines one species from another? Evolutionary biologists argue over the issue and sometimes they just “agree to disagree.”

The question is crucial “because it is the foundation of essentially all biological questions,” says spider systematics researcher Lacie Newton, a doctoral student in the Jason Bond laboratory, UC Davis Department of Entomology and Nematology, and the lead author of newly published research that explores that question.

“For example,” Newton says, “making successful conservation efforts depends on knowing how to identify the threatened/endangered species from other closely related species that are not threatened.”

Folding-door spiders are so named because they close the entrances to their silk-lined burrows by pulling in the rim. They are often described as having stocky brown bodies, thick legs and large fangs.

The five-member research team, also including Professor Brent Hendrixson of Millsaps College, Jackson, Miss., and postdoctoral fellow Shahan Derkarabetian of Harvard University, used an integrative approach with several lines of evidence (morphological, behavioral, molecular, and ecological data) to form a consensus “about where we should draw the lines between species in this complex,” Newton said.

They targeted the Antrodiaetus unicolor species complex, which Newton said, are “great organisms for exploring species boundaries because even though these spiders do not have any obvious visual differences to tell them apart--with the exception of the smaller and lighter brown A. microunicolor-- there are significant genetic differences between certain populations, that is potential 'cryptic' species.” James Starrett, project scientist in the Bond lab, is a co-author of the paper.
“As a result,” Newton said, “we found an additional cryptic species within the complex for a total of three species. Overall, our study highlights the need to use an integrative approach for defining species boundaries across all biodiversity so that researchers do not miss the opportunity to uncover species that would otherwise be overlooked. “

Said Professor Bond of the journal article: “I think its significance lies in the innovative and multipronged approach (integrative) she employed to evaluating species boundaries. The study emphasizes the importance of using both genomic scale and ecological data rather than relying on traditional morphological features alone to delimit species. Understanding species boundaries is an imperative for cataloging and describing the planet's rapidly disappearing biodiversity.”

Newton won a second-place award for her oral presentation on species delimitation at the 2019 American Arachnological Society (AAS), held at  Washington and Lee University, Lexington, Va. Her abstract: “Although species delimitation can be highly contentious, the development of reliable methods to accurately ascertain species boundaries is a fundamental and necessary step in cataloguing and describing Earth's quickly disappearing biodiversity. Species delimitation in spider taxa has historically been based on morphological characters; however, certain mygalomorphs are morphologically indistinguishable from each other yet have considerable molecular divergence." She is active in both AAS and the Society of Systematic Biologists.

Born and raised in Eupora, Miss.-- “a very small town with less than 2000 people”--Lacie recalls a childhood that included “a significant amount of time outdoors with my family surrounded by the rich flora and fauna of the Coastal Plain Floristic Province.”

“This experience,” she related, “fostered my interest in biodiversity and later guided me to take additional science classes to learn more about the complexities of the living world.” Professor Jason Bond is the Evert and Marion Schlinger Endowed Chair in Insect Systematics in the UC Davis Department of Entomology and Nematology and a co-author of the paper.
Lacie received her bachelor of science degree in biological sciences from Millsaps College in 2016 and then enrolled in the graduate school program at Auburn University, Alabama, studying with Professor Bond. When he accepted the Schlinger Endowed Chair in Insect Systematics in 2018, Lacie, along with other lab members, transferred to UC Davis.

What sparked her interest in spiders? “I actually used to be terrified of spiders,” Lacie acknowledged. “It wasn't until fall semester of my sophomore year when I took a zoology course that I began to appreciate not only the vast amount of diversity within spiders but also how amazing they are as a group, such as the tensile strength of spider silk being comparable to steel, spider venoms playing a role in potential medical applications, and a myriad of feeding strategies, etc..”

“As my professor Dr. Brent Hendrixson shared his research interests (systematics of mygalomorph spiders and scorpions) and passion for scientific outreach, I evolved from a guarded student to a fascinated one. Additional summer field courses focused on the biology, evolution, and ecology of arachnids completely changed my career trajectory from becoming a medical doctor to an evolutionary biology professor with research emphasizing evolutionary processes of arachnid study systems, specifically mygalomorph spiders like Antrodiaetus.”

Career as Evolutionary Biologist
The UC Davis doctoral student plans a career as an evolutionary biologist, exploring the evolutionary history of mygalomorph spiders. “My ultimate career goal is to become a biology professor where I can perform research and teach in a vibrant academic setting,” Newton said. “As a professor, my aims are to become an expert in my desired field of evolutionary biology, continue to be involved in the scientific community through collaborations with researchers, and become an advocate for vision and change in science education. “

“To clarify,” she added, “I want to study the evolutionary history of arachnids by using emerging technologies/methods and bioinformatics tools. I also plan to participate in the scientific community by publishing articles in respected journals, attending and presenting at conferences, and collaborating with various researchers. Lastly, I plan to take part in teaching and outreach opportunities to convey my enthusiasm for science to others. I feel outreach is especially important to get children enthusiastic about science and to demystify science for the public.”

Newton aims to become a faculty mentor “who can positively impact students--the way my own undergraduate mentor Dr. Hendrixson affected my life--by using my position as a professor to extend opportunities to mentor high school students, undergraduate students, and graduate students, especially from underrepresented groups such as women and members of the LGBTQ community. Specifically, I want to mentor students about career options available as well as offer my own point-of-view about pursuing a career in a STEM field.”

At UC Davis, Newton served as a teaching assistant for the “Introduction to Biology: Biodiversity and the Tree of Life” course. She is mentor to undergraduate students in the Mentoring Program, Equity in Science, Technology, Engineering, Math, and Entrepreneurship (ESTEME) organization, a graduate student organization dedicated to improving equity and inclusion in STEM fields, entrepreneurship, and leadership positions. She also volunteers on the admissions committee for GOALS,  the Girls' Outdoor Adventure in Leadership and Science, a summer science program for high school students to learn science hands-on while backpacking through the wilderness.

In addition, Newton volunteers at the annual UC Davis Biodiversity Museum Day and at the Bohart Museum of Entomology open houses, including one featuring “Eight-Legged Wonders (Spiders).”

The "eight-legged wonders," as she said, fascinate her. It's "not only the vast amount of diversity within spiders but also how amazing they are as a group." 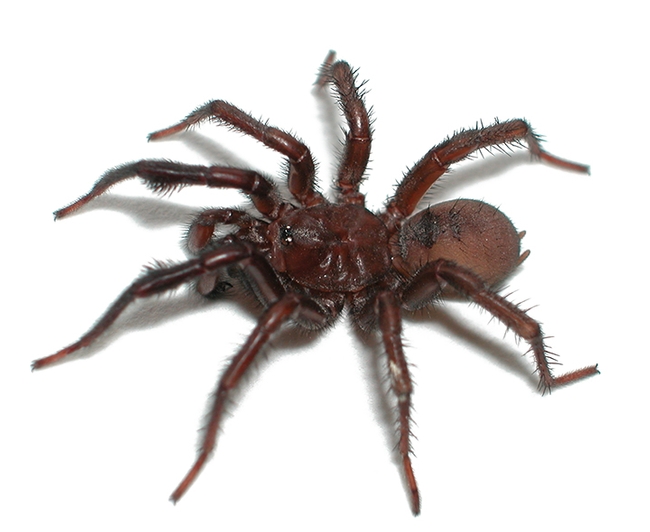