Häagen-Dazs has come up with a creative way to do so and it involves downloading a free concerto timer app on your I-Phone or I-Pad, pointing it at the lid of the brand's ice cream, and listening to a two-minute concerto until the ice cream is softened or tempered.

For every download of the concerto timer, Häagen-Dazs will donate $5 toward UC Davis bee research, up to $75,000.

According to a press release, “The Concerto Timer app features two-minute-long music concertos that help consumers understand the exact amount of time needed to prepare their Häagen-Dazs ice cream in order to get the full, rich consistency and allow all the flavors to fully bloom. Allowing the ice cream to soften slightly – also called tempering – for two minutes enhances the texture and exposes fans to the craftsmanship of premium ingredients that is characteristic of Häagen-Dazs ice cream, gelato, sorbet and frozen yogurt." Honey bee pollinating almond blossom. (Photo by Kathy Keatley Garvey)
“Waiting is not an easy task for ice cream lovers, but the process is transformed when users point their iPhone with the Concerto Timer app at one to two Häagen-Dazs cartons. The augmented reality feature showcases a perfectly timed, two-minute concert of Bach Inventions No. 14 performed by a violinist and cellist – all while users wait for the ice cream to temper. By the end of the concerto, the ice cream will have softened to a perfect consistency. “

Said Cady Behles, Häagen-Dazs brand manager: “The app concept came directly from our brand loyalists who recognized the necessity of tempering to enjoy all of the flavors in our ice cream. We took their feedback and developed an advanced mobile experience – something never seen before in the ice cream industry – that would be functional and also entertain them during the optimal time period.”

"Traditionally, augmented reality technology has involved flat video or low polygon 3D objects with a very limited and robotic range of motion," according to the news release. "Unlike other augmented reality apps, the Concerto Timer app integrates detailed 3D Kinect and video data."

"The app captures the nuances of the real violin and cello performances, enhanced with expressive particles, resulting in an ethereal and unique creative style. This approach allows the musicians to move with a fluid natural motion in 3D space."

Some 50 percent of Häagen-Dazs flavors are honey-bee dependent. “Honey bee colonies – which are responsible for one third of the world’s food supply — are dying at an alarming rate, posing a serious risk to our natural food supply, including many of the ingredients that define Häagen-Dazs ice cream,” according to the press release.

Häagen-Dazs has a long partnership with UC Davis. It launched the Häagen-Dazs Honey Bee Haven, a half-acre bee friendly garden that was planted in 2009 next to the Laidlaw facility. The brand also funded  Häagen-Dazs Postdoctoral Fellow, Michelle Flenniken, an insect virus researcher formerly based at UC San Francisco. She is now a research assistant professor in the Department of Plant Sciences and Plant Pathology, Montana State University. 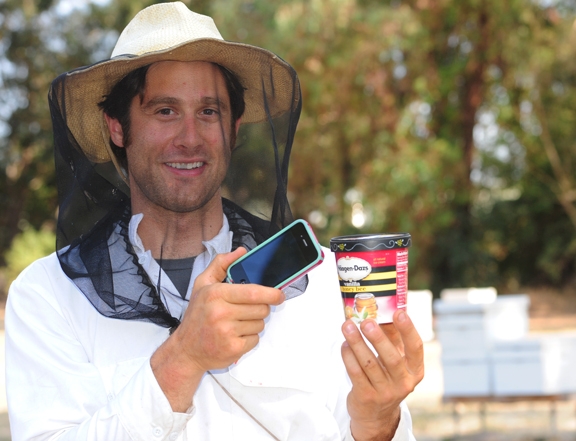