The drug candidate, known as EC5026, targets a novel pathway to block the underlying cause of certain types of pain. Described by EicOsis as a “novel, non-opioid and oral therapy for neuropathic and inflammatory pain,” it is an inhibitor to the soluble epoxide hydrolase (sEH) enzyme, a key regulatory enzyme involved in the metabolism of fatty acids. UC Davis recently licensed certain patents supporting the underlying technology exclusively to EicOsis.

Clinical trials are expected to begin this summer. “The clinical trials would be the world's first clinical evaluation of sEH for pain,” said William Schmidt, EicOsis vice president of clinical development, who has focused his entire professional career on developing novel pain medicines. “I am thrilled that we have a drug candidate lacking the side effects of both opioids and non-steroidal anti-inflammatory drugs that can potentially produce lead to an entirely new way to treat chronic pain.”

“Chronic pain is an enormous emotional and economic burden for more than 100 million people in the United States alone,” said Hammock, a UC Davis a distinguished professor who holds a joint appointment with the Department of Entomology and Nematology and the UC Davis Comprehensive Cancer Center. He co-founded EicOsis in December 2011 to alleviate pain in humans and companion animals. “The extreme and poorly treated pain that I observed as a medical officer working in a burn clinic in the Army, is a major driver for me to translate my research to help patients with severe pain.”

National statistics show that as many as eight out of every 10 American adults suffer from chronic pain; three out of four patients consider their therapies for pain ineffective; and as many as a third of the opioid-prescribed patients misuse them.

Every day, more than 130 people in the United States die from opioid overdose, according to the National Institute of Drug Abuse. The Centers for Disease Control and Prevention estimates that the total economic burden of prescription opioid misuse alone in the United States is $78.5 billion a year. That includes the costs of health care, lost productivity, addiction treatment, and criminal justice involvement.

“This completes the fundraising for Phase 1 of the clinical development program of this novel pain therapeutic,” said Hammock. “We are particularly pleased that the support came from Open Philanthropy with its history of both financially successful and socially important investments.”

Dushyant Pathak, UC Davis associate vice chancellor for Research and executive director of Venture Catalyst, lauded the achievement. “We are very pleased to see the achievement of this important business milestone by EicOsis,” Pathak said. “It's especially heartening to see the entrepreneurial persistence of Bruce Hammock being recognized by Open Philanthropy.”

Open Philanthropy identifies outstanding investment opportunities and makes grants based on importance, need, and tractability, according to the organization's scientific advisors Chris Somerville and Heather Youngs. They said Open Philanthropy selected the Davis project because the EicOsis drug “may reduce suffering from chronic pain conditions which are severe in both developed and developing nations.”

On its website, http://www.eicosis.com, EicOsis depicts itself as “a privately held company developing a first-in-class therapy of a once daily, oral treatment for neuropathic and inflammatory pain in humans and companion animals.”

“Our orally active compounds stabilize natural regulatory mediators in the body that reduce endoplasmic reticulum stress, which, in turn, appears to cause a variety of chronic diseases,” said EicOsis neurobiologist Karen Wagner. “The EicOsis compounds represent a new mechanism of action that both resolves inflammation and reduces pain.”

EicOsis (pronounced eye-cosis), derives its name from eicosanoid, “the major backbone of chemical mediators in the arachidonate cascade,” said Cindy McReynolds, an EicOsis project manager and a doctoral student in pharmacology and toxicology at UC Davis. “It symbolizes the epoxide group in chemistry, which is key to the anti-inflammatory chemical mediators and where the biochemical target called soluble epoxide hydrolase works.”

The National Institutes of Health (NIH) Blueprint for Neuroscience Research (Blueprint) awarded EicOsis a $4 million grant to advance compounds through Phase 1 clinical trials for diabetic neuropathic pain. A goal of the Blueprint Neurotherapeutics Network is to discover, develop and generate novel compounds that will ultimately be commercialized and benefit humankind.

“We are fortunate to receive all this support in the development of our oral medication for pain treatment through human Phase 1a trials, and now Open Philanthropy through human Phase 1b trials and beyond,” said Alan Buckpitt, a UC Davis retired professor of veterinary pharmacology and toxicology, and a principal investigator on the grants.

Hammock, a member of the UC Davis faculty since 1980, received his doctorate in entomology and toxicology from UC Berkeley. He traces the history of his enzyme research to 1969 during his graduate student days in the John Casida laboratory.  Hammock was researching insect developmental biology and green insecticides when he and colleague Sarjeet Gill, now a distinguished professor at UC Riverside, discovered the target enzyme in mammals that regulates epoxy fatty acids.

“Basically, I began by trying to figure out how a key enzyme, epoxide hydrolase, degrades a caterpillar's juvenile hormone, leading to metamorphosis from the larval stage to the adult insect,” Hammock. He asked himself these questions: “Does the enzyme occur in plants? Does it occur in mammals?" It does, and particularly as a soluble epoxide hydrolase in mammals.

"It is always important to realize that the most significant translational science we do in the university is fundamental science,” said Hammock, marveling that “this all began by asking how caterpillars turn into butterflies.” 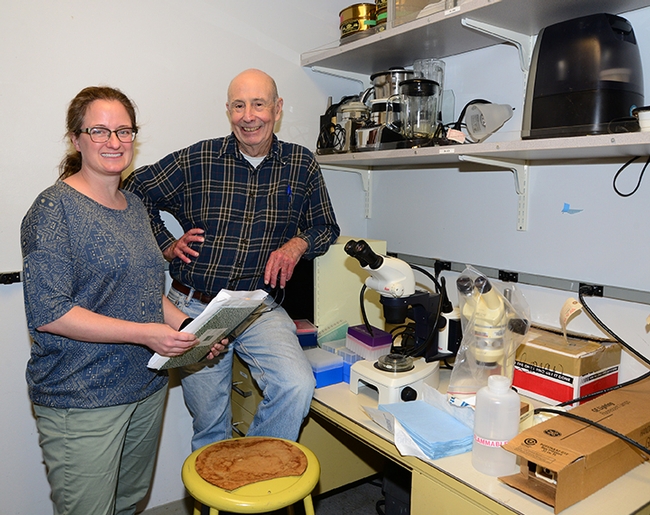